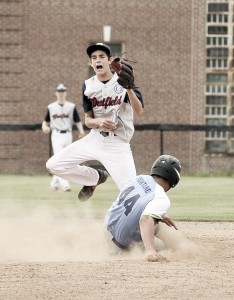 NEWTOWN, Conn. – If there ever truly a game that the Westfield Babe Ruth Baseball 13-Year-Old All-Stars never deserved to lose, that game was Tuesday.
Westfield pitchers Spencer Cloutier and Jimmy Hagan combined to pitch 10 scoreless innings of five-hit ball before losing to Portland (Maine), 5-0, in the winner’s bracket final of the New England Regionals double-elimination tournament Tuesday at High Meadows Field in Newtown, Conn.
Westfield must now win three straight games, including the loser’s bracket final Wednesday, to advance to the World Series.
“Certainly the two best teams came together – there’s no doubt about that,” Westfield 13-Year-Old All-Stars manager Mike Nihill said. “Even the umps admitted that. To coach this was just a treat. We just came out on the wrong end.”
For the majority of the 3-hour, 23-minute classic, there was no right end. 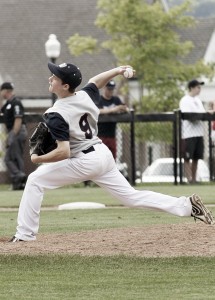 Both teams waged a pitcher’s duel with Westfield starting pitcher Spencer Cloutier matching Portland ace Tre Fletcher stride for stride every step of the way. Cloutier (3 Ks) allowed only one hit before being relieved by Jimmy Hagan to begin the sixth. Hagan pitched five solid innings, scattering four hits before exiting after the 10th.
In the third, Cloutier even had a three-pitch inning, a feat not usually accomplished, especially at the 13-year-old age level.
“For them to throw the ball the way they did today,” Nihill said, “there’s nothing more that I could ask of them.”
Portland stranded two base runners in each of the first and fifth innings, wasted a leadoff hit in the fourth (the batter, Bobby Ridge advanced to second and third bases on a stolen base and wild pitch), had a base runner thrown out by Westfield catcher Jack Blake to end the sixth, stranded another runner in the seventh, and failed to take advantage of two consecutive one-out base knocks in the 10th when the Whip City All-Stars turned an inning-ending double play. 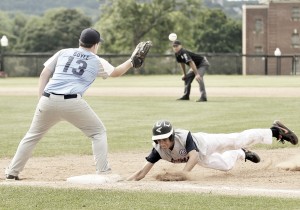 Fletcher proved to be the difference-maker.
Portland’s starting pitcher gave up one hit in six complete innings of work on the mound, a ringing double near the right field line from Cloutier in the fourth. He struck out eight batters.
Portland reliever Jason Montano pitched the final five innings. Although he was not as dominant as Fletcher, the burly pitcher allowed his defense to make the plays behind him and his fellow starter to even make a move from his infield position. 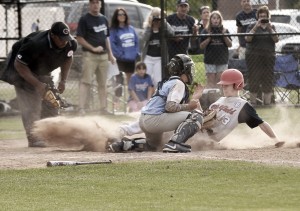 Westfield’s Jack Blake is out at home during Tuesday’s game against Maine in Newtown, Connecticut. (Photo by Frederick Gore)

In the eighth, Blake hit a towering one-out triple to deep right field. He nearly scored on Mike Lurgio’s hit the left side of the infield grass but Fletcher, playing third base, made a diving stab, got up and fired to home to get the out on the fielder’s choice. Blake was ruled out on the play, which appeared could have gone either way. It would be the difference between a walk-off win, and a loss.
Still, Westfield had an opportunity to score in the ninth when Ethan Dolan hit a booming two-out double to the left field fence. Cam Parent followed with a sharp single to center field, but another fielder’s choice ended the threat.
Westfield had runners on in the 10th and 11th innings, but failed to score.
Portland finally broke through in the top of the 11th with Westfield’s bullpen depleted, loading the bases with three walks, scoring on an outfield error, two wild pitches, and a pair of bases-loaded walks.
Carter Cousins, who suffered a head/neck injury on Sunday in a collision with the first baseman on a fly ball, and Baley Collier, who was injured making a diving play on the final out, both started in Tuesday’s contest.
“They were true warriors,” manager Nihill said. “All of these kids can take a lot of positives from today’s game. It was a real gut check. A lot of life lessons were learned here.”