WESTFIELD—As this construction season starts to near its end, the Columbia Greenway trail over the Westfield River is still tentatively on track to open to the public in the spring.

According to City Engineer Mark Cressotti, work has been underway on the abandoned railroad trestle over the Westfield River, which is being modified to act as part of the Columbia Greenway that will connect two city parks and give pedestrians a bridge to access both. The work on the project began in July and an estimated endpoint of spring 2018 was given then, which has not changed. 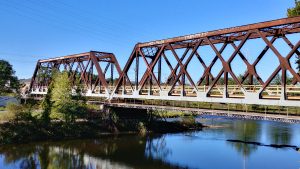 The abandoned railway bridge over the Westfield River that is the site of the eventual Columbia Greenway North.

More specifically, the estimation of completion is for June of next year, though it remains hopeful that it could finish before then. This timeline is in spite of an initial delay in the project’s start.

The project is currently going through the steps of stripping, painting and priming, according to Cressotti, with the bottom trestle already done and the top portion scheduled to be next. However, this will not occur until concrete has been poured to create the eventual pathway for pedestrians and others.

Cressotti said that workers are starting the process of preparing the bridge for this pour, and once finished workers will also use it to access the upper trestles. The concrete pouring should happen by the end of this month.

Even after this step is finished though, pedestrians will not be allowed to access the bridge.

According to Cressotti, railings still need to be installed, as well as electrical work for lighting that will be used on the bridge, among other items that must be finished.

The project, known as the Columbia Greenway North segment, was funded by about $3.7 million in Massachusetts Department of Transportation (MassDOT) funds. In addition to this funding, Cressotti said that that the city contributed “nonparticipating costs” of about $40,000 to the project, which was mostly for lighting.

The city is not expected to be contributing more to the project, Cressotti said, though if the project exceeds the total by 10 percent, then the city may be in line for additional costs.