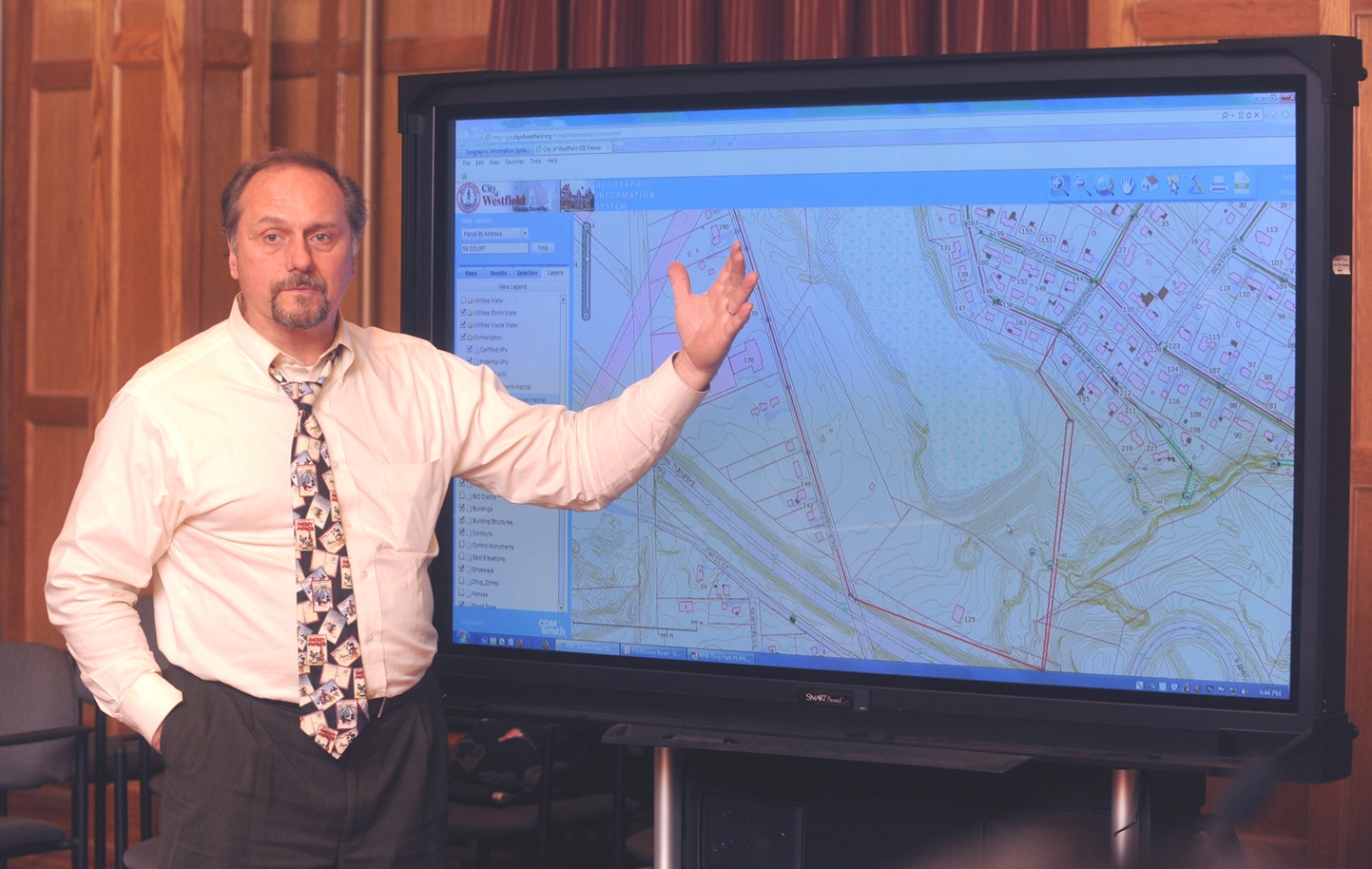 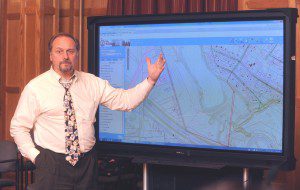 City Engineer Mark Cressotti explains the plans for a dog park at Arms Brook Park to the members of the Conservation Commission at their meeting last night in the City Council chambers. (Photo ©2012 Carl E. Hartdegen)

WESTFIELD — The Conservation Commission voted last night to continue the public hearing relative to the proposed dog park at the Armsbrook flood control dam to their December meeting to allow a state agency to submit comment on the project.
The state Natural Heritage and Endangered Species Program was notified by the city of the proposed use of city-owned property for the dog park. The agency can restrict use of land or add conditions for a proposed use to protect sensitive habitat of endangered flora and fauna species. The hearing was continued to Dec. 11,2012 to allow the agency to review to the park plan and address concerns it may have about the project.
City Engineer Mark Cressotti presented details of the project last night during the Conservation Commission hearing dealing with the area of the dog park within the resource area of the impoundment pond behind the flood control dam. The project includes erection of several fences which would establish the boundaries of the dog park and which would have potential impact in the resource area.
The dog park would be under the control of the city’s Park & Recreation Commission, while the dam is under the management of the city’s Flood Control Commission. Both of those boards have been involved in defining the scope of the dog park project.
More than a year ago, members of the Friends of the Westfield Dog Bark, working with the Parks and Recreation Commission, had considered utilizing part of the unused Arms Brook Park for the dog playground that they were trying to build.
The Friends, several of whom attended the Conservation Commission hearing last night, are still working to create a dog park in the city and, after considering other locations in the interim, have returned to Arms Brook with the blessing of Mayor Daniel M. Knapik.
The current plan calls for two fenced areas where off-leash dogs, and their handlers, could play, exercise and socialize.
The entrance to the park is located between the Massachusetts Turnpike overpass and the eastern boundary of the St. John’s Lutheran Church cemetery. A gravel drive, with parking on a grass area abutting the driveway, would be renovated. Under the current plan, the existing rudimentary driveway would be widened and refurbished and a row of parking spaces would be laid out on the lawn adjacent to the driveway.
A small fenced enclosure at the end of the driveway would be created as a supervised play area for smaller dogs while a much larger, wooded area would also be available for dogs which could run free in the woods.
The cemetery’s eastern fence would define the edge of the public driveway while the cemetery’s northern fence would serve as one of the borders of the large dog run. The shore of the reservoir would mark the second long boundary of the larger play area leaving only relatively short stretches of fencing to be erected on the shorter eastern and western borders.
On the east side of the large play area, the fence which would be erected would connect with the fence of the smaller dog run to contain users and discourage them from trespassing on the face of the flood control dam. A locked gate would allow access to the dam for maintenance workers.