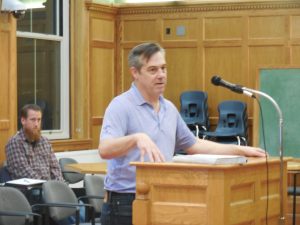 Frank DeMarinis addresses the Planning Board on a proposed charter school in 2018. (WNG File Photo)

WESTFIELD – Last week, area superintendents received notification that Commissioner Jeffrey C. Riley would not be extending an invitation to the Foundation Academy Charter School in Westfield to submit a final application this fall to establish a charter school that would serve students in their school districts.

The Foundation Academy Charter School had proposed opening a K-8 school on Root Road next to the Roots Academy with a maximum enrollment of 580 that would serve students from Westfield, Easthampton, Gateway Regional, Hampshire Regional 7-12, Chesterfield-Goshen, Southampton, Westhampton, Williamsburg and Holyoke, with an anticipated opening in 2020.

The notification, from Alyssa K. Hopkins, school development manager in the Office of Charter Schools and School Redesign, stated that the review of the Foundation Academy Charter School prospectus had been completed.

According to the Department of Elementary and Secondary Education website, the commissioner’s determination is based upon a review of each prospectus against the application criteria, or, in the case of one resubmission, the requirements necessary for proven provider status.

The site plan for the school, which is not yet built, was approved by the Planning Board in March of 2018. Applicant Frank DeMarinis of Sage Engineering and Roots Athletic Center, located adjacent to the proposed school at 181 Root Road, had said at the time several parties were interested in opening a school for grades 6-12.

“I do have two or three interested parties,” DeMarinis said following the March 2018 meeting , but added that they had asked to keep that information confidential. He said one was sports-focused, and the other two, science and education-focused.

A press release sent by DESE on Aug. 3 of this year announced that four groups had sent prospectuses announcing their intentions to open new charter schools, among them the Foundation Academy Charter School. The other proposals were for schools in Lynn and Milford.

Commissioner Jeffrey C. Riley said at the time they would decide by mid-September which applicant groups to invite to submit full proposals for new schools, which would have been due Oct. 16.

“We will review these prospectuses and expansion requests carefully and will consider their strengths as they relate to opportunities that they would offer students,” Riley said.

Under state statute, the charter school cap limits the amount of net school spending that a school district can spend on charter school tuition. No more than nine percent of a district’s net school spending may be allocated to charter school tuition, except in the state’s lowest performing districts, where the cap on charter tuition is 18 percent. The proposals received over the summer would create new schools or expand existing schools to serve communities that are still below their caps, including Westfield.
.
Nearly all of the groups proposing new schools or expansions this year needed to show that they are proven providers, according to the press release.

There are currently 82 charter schools in Massachusetts serving over 45,000 students, which is almost five percent of all public school students in the Commonwealth. For more information on charter schools, visit http://www.doe.mass.edu/charter/

“The reality is that charter schools negatively influence public school districts for a variety of reasons. While I am relieved that the Commissioner Riley has decided not to approve this application this year, this relief is likely temporary. I fully expect the Foundation Academy Charter School to reapply next year,” said Westfield Public Schools Superintendent Stefan Czaporowski, in response to the announcement.