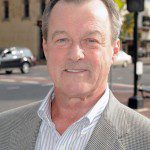 WESTFIELD – The Finance Committee will recommend approval of the $7.5 million senior center construction bond to the full City Council next Thursday.
The Committee voted 2-1 on a positive recommendation for approval of the bond request submitted by Mayor Daniel M. Knapik.
The dissenting vote was cast by Ward 5 Councilor Robert Paul Sr., who said he is opposed to the 8 percent contingency which adds $536,000, but who said he supports the senior center construction project.
Paul argued that the bond should cover the cost of construction, materials, and construction oversight, but should not include the funds included to address unforeseen problems during the construction phase. 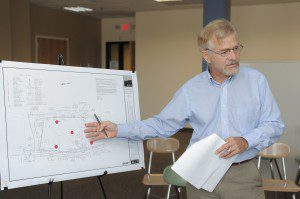 “I don’t see a need for a contingency,” Paul said.
Paul commended the Senior Center Building Committee for their work and said the project should be constructed for the cost established by the contracts without a need for the contingency funding.
City Purchasing Director Tammy Tefft said she has historically built contingency funding into major projects to deal with issues which arise during the construction effort. The senior center construction phase will span about 14 months, Tefft said, during which time the cost of materials and equipment could increase. 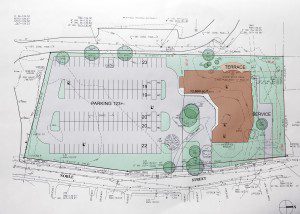 An overview drawing of the proposed Westfield Senior Center that will be located on Noble Street. (File photo by Frederick Gore)

“We are below the cost estimates of the architects, project manager and a third party hired to evaluate the project and the cost assessment,” Tefft said, “So this is a legitimate bid by a great Westfield company.”
Tefft said she also included funding to cover the cost of FF&E (furniture, fixtures and equipment) in case the Friends of the Senior Center, which has initiated a fund-raising campaign to purchase those items, fails to attain it goal of $500,000.
“I hope our numbers are good,” Tefft said. “My goal is that we will never have to (bond) for the full $7.5 million.”
The apparent low bid was submitted by Forish Construction of Mainline Drive with a base price of $6,184,541 and a combined price of $6,324,625 for the construction and six bid alternates.
Tefft said the Forish has been issued a contingency award “to lock in the low bid” but the actual contract cannot be awarded until the funding is in place.
Tim Singleton of Diversified Project Management of East Hartford, Conn., the city’s Owners Project Manager, said at the May 8 building committee meeting that the $7.5 million bond request includes a $539,000 construction budget contingency, about 8 percent of the low combined bid.
State law required a 20-day appeal period following the final passage before the city can expend funds based upon the bond. Typically the actual construction is financed through bond anticipation notes (BANs) and the bond sold following competition of the project when the exact dollar amount is known.