HARTFORD – Hartford Stage ends its celebratory 50th season with last (Broadway) season’s well-deserved Tony Award winner for “Best Play”, Christopher Durang’s very, very, very funny “Vanya and Sonia and Masha and Spike”. A wise and witty play, full-tilt staging, six incrediby comedic performances, and hypnotic sets and lights add up to one of the most satisfying and funny evenings of theatre I’ve enjoyed in a very long time. . . .
It’s great to see Durang in the winner’s circle again. The Yale Drama School grad made his mark in New York shortly after graduation with zany plays such as “Sister Mary Ignatius Explains It All For You”, “Beyond Therapy”, “A History of the American Film” and more. Durang combines parody, cynicism, patter, and gags with critical dissection of major issuesincluding child abuse, the Catholic Church’s dogma and culture. 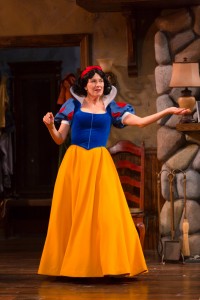 “Law and Order”‘s Leslie Hendrix is Masha in “Vanya and Sonia and Masha and Spike” at Hartford Stage. (Photo by T. Charles Erickson.)

A moment of transparancy here: I was a year behind Durang at Yale, and his cabaret sketches had me on the floor laughing throughout my Yale tenure, especially his collaborations with fellow classmate Sigourney Weaver (who played Masha on Broadway).
“Vanya and Sonia and Masha and Spike” shows the more mature Durang. Inspired by Chekhov, Durang has named his characters and painted their predicaments with hints of the Russian playwright’s themes. The laughs, wit and wisdom are definintely 21st century Bucks County, PA.
Without spoilers, Vanya and Sonia are middle-aged siblings, who live modestly in their parents’ country house. Their lives were consumed by caring for their elderly, now dead parents, and they had little lives of their own. Enter Masha, their successful over-the-top movie star sibling, with her much younger boy-toy, Spike, in tow. Masha says she’s in town for a costume party, but she’s really in town for other reasons. Cassandra, a housekeeper turned soothsayer, and Nina, the girl-next-door, complicate an angst-ridden sibling reunion. 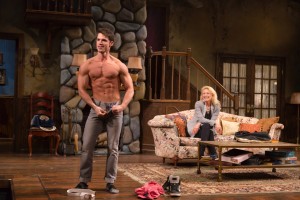 David Gregory and Leslie Hendrix star in “Vanya and Sonia and Masha and
Spike” at Hartford Stage. (Photo by T. Charles Erickson.)

Durang has provided a group of familiar characters with one one-liner after another, and director Maxwell Williams makes great use of the acting sextet’s comic abilities, Jeff Cowie’s fabulous country house set with its alluring background of woodlands and summer sky. John Lasiter’s lighting is great, John Gromada’s music quickly sets mood, and Tricia Barsamian’s costumes are winners.
Leslie Hendrix (you’ll know her from her long-run on TV’s “Law & Order”) is perfect as the self-absorbed, over-the-top Masha. David Gregory, real-life soap star and hunk, gives Spike, an equally self-absorbed character, perfect poses and poseur. Mark Nelson is compelling as the brooding Vanya, and his second act monologue is tour-de-force. Caryn West maneuvers a character’s mood change from the dour Sonia into (I’m not going to tell) brilliantly. Andrea Lynn Greene is a delicate, childlike Nina. Stacey Sargeant is hilarious as the superstitious housekeeper Cassandra. I missed some of her wittiest lines from laughing so hard at the previous ones. 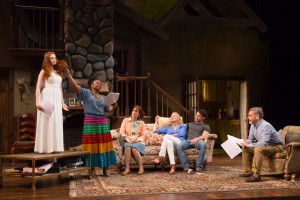 The cast of “Vanya and Sonia and Masha and Spike” at Hartford Stage. (Photo
by T. Charles Erickson.)