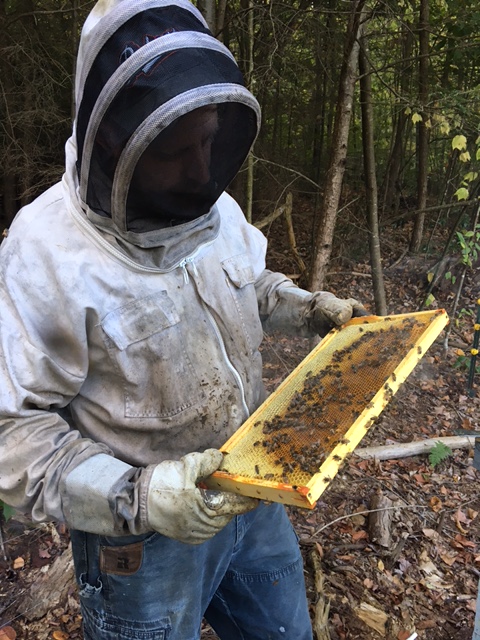 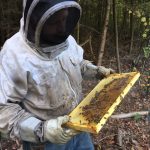 Nathan Sperry of Russell inspects his beehives in preparation for winter. (Submitted photo).

However, after hearing at the meeting from Nate Sperry, vice president of the Hampden County Beekeeping Association, and receiving a lengthy and informative letter from the club’s treasurer, commercial beekeeper William Campbell, the committee continued the matter, saying they were getting an education on beekeeping.

Onyski said he started looking into an ordinance after he received a call from a resident who had an “unkempt” beekeeper as a neighbor, whose bees were swarming through her yard to get to her swimming pool for water, sometimes in large numbers.

Onyski said they brought the Health Department on board, who did a site visit and determined it wasn’t a nuisance. “We have since studied some other areas that had beekeeping ordinances or rules. Longmeadow had some beekeeping practices on residential land. We also looked at Western Mass Beekeepers Association — I learned a lot,” he said.

Onyski said he and the other councilors had received a lot of phone calls.

”I can’t believe how many beekeepers there are in Westfield. Most of them [say] that they don’t want a regulation at all, or they want a regulation that’s friendly, that’s acceptable, that doesn’t go overboard. There is no intent to ban bees or beehives at any time. We just want to discuss it, and discuss whether an ordinance should be applied to this, whether it goes as a Board of Health regulations, and best practices,” he said

Onyski said he also visited a beehive owned by Gary Clark of Westfield, “who gave me a schooling on this.”

Public Health Director Joseph Rouse said that everything Onyski had said is what they have seen in the past with complaints about beekeeping. “Normally, we’ve had complaints from people who feel bees are too close to their property, but we haven’t had instances where that has caused harm,” Rouse said, adding that people are not informed about beekeeping, and that it can be done safely. He said any ordinance or regulation needs to have a component of education to it.

Sperry said the Hampden County Beekeepers Association represents 350 to 400 members who are very passionate about beekeeping. He said the club has a strong emphasis on education, and runs a new beekeepers school in the winter months.

Sperry said when he became a beekeeper in 2006, he went to a club meeting where there were six people in attendance. They now have hundreds of members, and average 60 to 70 people at every meeting. He said due to media coverage about bees, their health and their declining populations, beekeeping has become very popular. He said it has also become quite a complicated hobby that requires good husbandry skills.

Sperry said their classes discuss where on a property to locate hives and how to provide a water source for bees, which he said is “the whole reason we’re having this conversation. We encourage urban beekeepers to put out a water source, and to keep that water source filled.” He said bees require a significant amount of water, especially as temperatures rise in the summer to regulate their hives.

Sperry said the club was concerned when they heard about the possibility of a new ordinance in Westfield. “We didn’t want to discourage people from becoming beekeepers in Westfield,” he said.

They were also concerned about limiting the placement of hives in Westfield by non-residents, especially for people in agriculture, who may contract with beekeepers to get the pollinators they need to grow the crops they need to grow. “There are lots of reasons to be careful in crafting an ordinance,” Sperry said, such as including an agricultural exemption.

Instead, Sperry suggested that the city and the Board of Health call on Hampden County Beekeepers Association members to help resolve problems that do arise with beekeeping.
“Our charter dictates education as a primary concern. There would be plenty of beekeepers in the local area who would be more than happy to volunteer to visit a beekeeper who hasn’t done things quite right, to go and talk about how to set up the apiary in a better fashion,” Sperry said.

When asked about how many calls he gets per year regarding bees, Rouse said a handful, if not less.

“The problem is those calls we get are so persistent because of the lack of education that the neighbors have about what’s going on. All they see is bees and think something worse is going to happen,” he said, adding people are afraid of being overwhelmed by bees and stung, or for some people who are allergic, going into anaphylactic shock, which he said is a valid concern..

Rouse said education for the general public is important, and that he had attended a day-long Massachusetts Apiary program. “It’s location, location, location. When people see what’s happening, they just get scared,” he said.

Sperry said that a letter sent to the committee by Campbell, a commercial beekeeper, lays out the most common complaints you would get from a neighbor and provides the remedies. He also said he would argue that the honus is on the beekeeper to try to make it a non-issue from the start. For example, if someone is putting in hives on their property, they often do go to the edge of the yard which is logical, but if the hive opening is facing their yard with its back to a neighbor, that already solves some problems.

Sperry said fences can be used to keep hives out of sight. In response to a question from Adams about bears, Sperry said the club also recommends putting up electric fences when they put out their hives, to keep bears and other predators out.

“We devote an entire session of bee school to keeping out bears and other pests, such as skunks who will eat bees from the landing board at night. We strongly recommend electric fences around hives. You would be looking at $500 or so to get a hive started, between buying the equipment and bees. Then when you consider your time, (you can) multiply that by thousands in short order. A bear can pretty much destroy that in one evening. The price of an electric fence is a really good investment. If a bear gets zapped by an electric fence, they won’t bother bee hives. It’s important to set up a fence at the same time as they start their hive, because after a bear has already gotten into a hive, they might be willing to risk the pain for reward,” he said.

Adams said he gets the impression that the club handles the industry well, and was in favor of putting any problems in their hands, and not in favor of an ordinance.

Sperry said given the chance, they can work with people and take this off the committee’s plate, who won’t even have to worry about it, if Rouse agrees to reach out to them.

“That’s what we do; we are trying to promote responsible beekeeping amongst our members. Given the normal types of complaints, we’re a good resource for the city, for allaying anyone’s fears, and trying to make improvements on apiaries if they become a problem,” Sperry said.

Sperry also said that he teaches Horticulture Tech at Westfield Technical Academy, where he has three hives on school property, and invited the councilors to come down and go into the hive with them to learn more.

Burns said Ward 6 is in a rural area, and agreed with Adams. “If it isn’t broke, why fix it,” He also thanked Cambell for the informative letter, which he later shared with City Council members.

Onyski asked for a motion to continue the conversation, and leave it in committee.