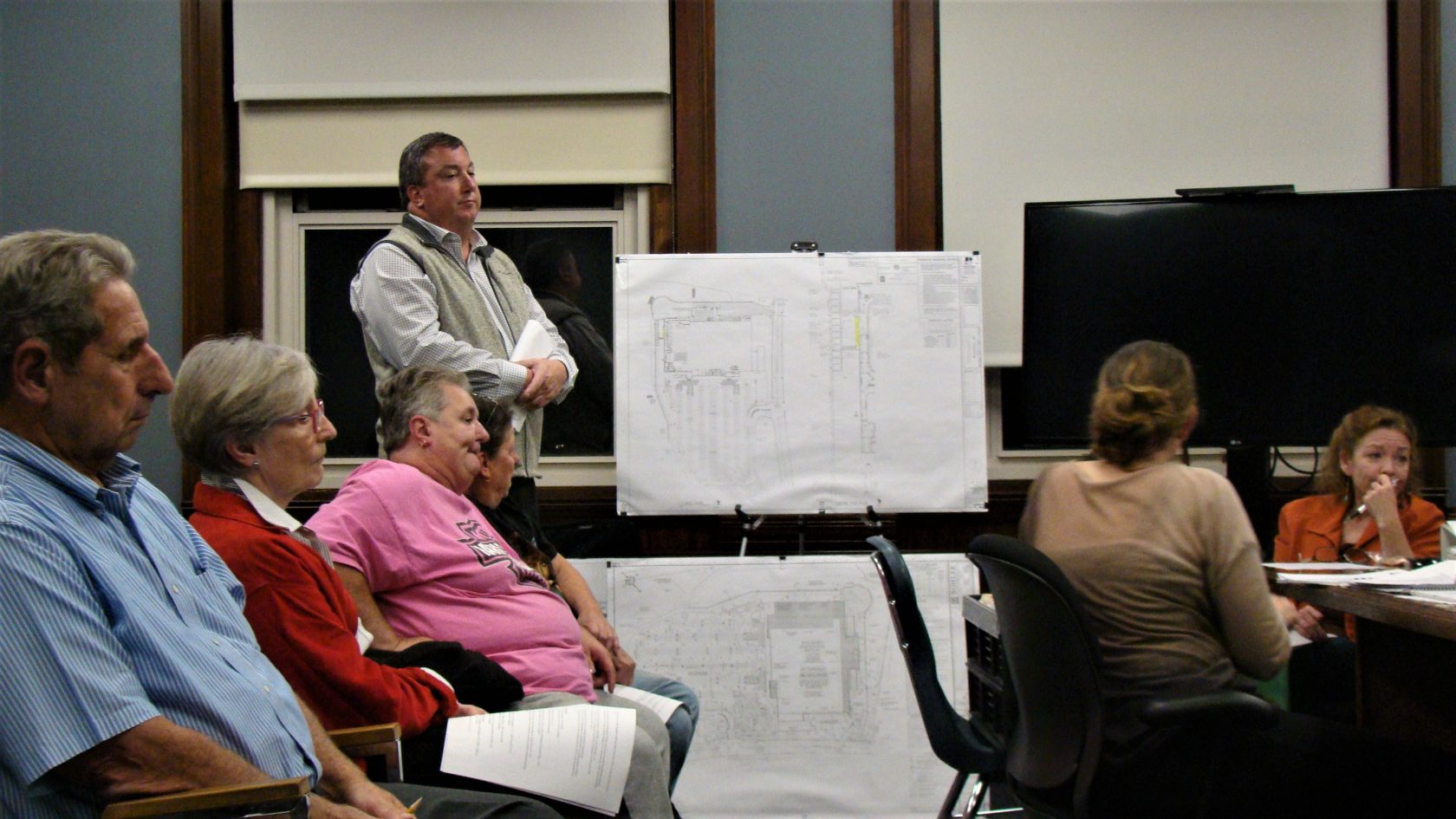 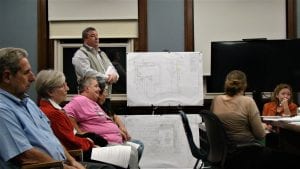 Luke DiStefano of Bohler Engineering, who presented a plan for a pedestrian ramp behind WalMart, waits on Conservation Commission decision. (Photo by Amy Porter)

WESTFIELD – The majority of the public hearings at the Conservation Commission on Oct. 8 were continued to the next meeting, some for the third or fourth time, with only a few projects approved.
Westfield Coating Corps on 221 Union St. was approved for a loading dock repair. Ryan Nelson of R. Levesque Associates said the company is proposing repairing its existing loading dock by pouring new concrete on the same footprint, with no impact to the flood zone area. The project was approved with a request for a post construction letter from R. Levesque.
A lengthy hearing on the replacement of bridges number one and two by the Springfield Water & Sewer Commission at the West Parish Filter on 1515 Granville Road, presented by Melissa Coady of Tighe & Bond also resulted in approval of the project with a $10,000 bond.
Coady said that bridge number 3 on the property had been replaced last year. She said because the bridges are on private property, they are not regulated by MassDOT. She also said there would be no net increase to impervious areas with the new bridges, and manual removal of the invasive species Japanese barberry along with introduction of native species and stream bed restoration would be a part of the plan.
Also approved with an as built plan and a $500 bond was a new patio for 487 East Main St., in the rear of Super Phipps Liquors. Steve Salvini of Salvini Associates said the design was for a reconfigured patio with added height from crushed stone and a new bolted stockade fence.
Big Y Foods came before the Conservation Commission for a third time with its plans to build a gas station and convenience store at 330 East Main Street, and were among the projects continued.
Larry Webster of Benesch & Co. said he had addressing all concerns from the previous hearing, and had received the signoff from the city engineer for stormwater plans. The Planning Board also approved a special permit and site plan at its meeting on Oct. 2.
Conservation Coordinator Karen Leigh said they had received a note from the Massachusetts Department of Environmental Protection (DEP) that day requesting a simplified version of the plans for flood storage.
“Most of it is simple enough to provide,” Webster said. Leigh said the Commission requires the response from DEP prior to issuing anything. Webster said he wasn’t aware of the notice until that afternoon, and the hearing was continued to Oct. 22.
Stephen Oleksak of 994 Western Ave. had also come before the Commission multiple times seeking a stream crossing for access to a solar array on his property. Nelson also spoke to Oleksak’s project, saying the utility company would need access once a year. He said Commission members had completed a site visit on the property last week.
Leigh questioned the intermittent status of the stream, saying the three years had run out at the end of August, reverting the status back to perennial and giving it a riverfront impact.
Nelson said the DEP had allowed the documentation submitted three years ago in granting renewed intermittent status.
“If determination is good for only three years, why would the documentation it was based on be good,” Leigh said. She said four days of new photos were required to complete the documentation. Nelson said that Oleksak had taken the photos, although they had not been printed.
“Their design complies with stream-crossing standards,” said new Conservation Coordinator Meredith Borenstein.
“I would like to request approval. I already missed two weeks because of missing the agenda,” Oleksak said, adding that another two weeks would make it eight weeks. Although some Commission members were satisfied, the hearing was continued to Oct. 22.
Walmart, represented by Luke DiStefano of Bohler Engineering, also had its request to install customer pick-up spaces within the paved parking area and a new concrete pedestrian ramp continued to Oct. 22.
The plan called for 400 cubic feet of additional impervious surface, when the company had been told no more. The Commission asked them to find comparable storage within existing construction, and a site visit was scheduled.