WESTFIELD – Tyler Cousineau tossed a two-hitter, and the Westfield Babe Ruth 14-Year-Old All-Stars took advantage of some shoddy defense by Blackstone Valley en route to an 11-1, five-inning (mercy-shortened) victory in Tuesday night’s state semifinal at Bullens Field.
Nearly every time Cousineau got in a jam, he recovered nicely. His only blemish was a harmless bases-loaded walk in the second inning. He struck out five batters. 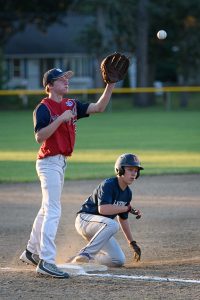 Blackstone threatened to take the game’s first lead in the first inning when Connor Donahue drew a lead-off walk, stole second and third bases to get into scoring position, but Cousineau came back to retire the Nos. 2, 3, and 4 batters, the last two via the “K”.
Westfield did, in fact, take the first lead of the game in the bottom half of the opening inning, thanks to a lead-off single from Raphael Morganelli, shaky defense by Blackstone, and an RBI single from Brian Strange.
Westfield went up 2-1 in the third inning. Fred Murray led off with a single and eventually came around to score on a wild pitch.
Although it was all Westfield needed, they continued to seize the moment.
Westfield scored four runs in the fourth inning, and five more in the fifth to end it. Primarily fueled by walks, passed balls, and errors, the Whip City’s All-Stars still had some nice hits from Adam Tremblay (4th inning double, 5th inning RBI single) and Morganelli (4th and 5th inning RBI singles).
Westfield advances to play Pittsfield in the 14-Year-Old championship game Wednesday night at Bullens Field at 5 p.m.