SOUTHWICK – The Community Preservation Committee (CPC) voted Monday night on an application request from the Franklin Land Trust to bond $1.2 million out of their account to help preserve the North Pond property.

After a motion was made by CPC member John Whalley to approve the request, a vote was taken and it ended in a 4-4 tie, preventing the motion from passing. 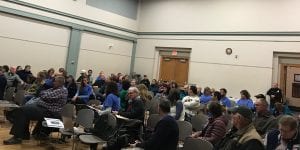 A number of Southwick residents attended the Community Preservation Committee meeting on Monday night to see if the CPC would bond $1.2 million for preservation of open space adjacent to North pond. (Photo by Greg Fitzpatrick)

The vote not passing means that the warrant article for the special town meeting on Tuesday night will be to see if the town will bond the $1.2 million. Having the town bond the $1.2 million will increase the Town’s tax rate. If the CPC voted in favor of the Franklin Land Trust’s request on Monday, it would not have increased the tax rate.

Prior to the vote from the CPC, a number of town officials, residents, and North Pond supporters spoke about the request from the Franklin Land Trust.

“Nobody wants the town to bond for this so I think that’s the unity we can share,” said Southwick resident Michelle Pratt. “We’re hoping that this decision will be very appropriate for this project tonight.”

CPC Chairman Bob Horacek noted that by agreeing to bond the $1.2 million out of the CPC account, he felt that other projects that fall under the CPC category could be forgotten.

“Some projects will go by the wayside or not get done,” said Horacek.

The CPC voted on the Franklin Land Trust’s application request at the Southwick Town Hall on Monday night. (Photo by Greg Fitzpatrick)

Marcus Phelps, a current member of the Planning Board and the former Town Planner, read off some research he’s done and believes that about 35 lots could be built on North Pond if it doesn’t end up being preserved. Phelps went on to say that looking at the actual property values on North Pond, he estimates that the town would lose approximately $149,000 per year if the 146-acre North Pond property was developed for 35 lots.

“I just look at this as a great opportunity. This would alleviate that tax burden for the townspeople,” said CPC member Chris Pratt. “Yes, this is a lot of money, but it’s worth it, it’s something the town has wanted for a long time.”

If anyone is a registered voter in Southwick and wants to vote on the warrant articles, the special town meeting takes place on Tuesday night at 6:30 p.m. in the gymnasium at the Southwick Regional School.