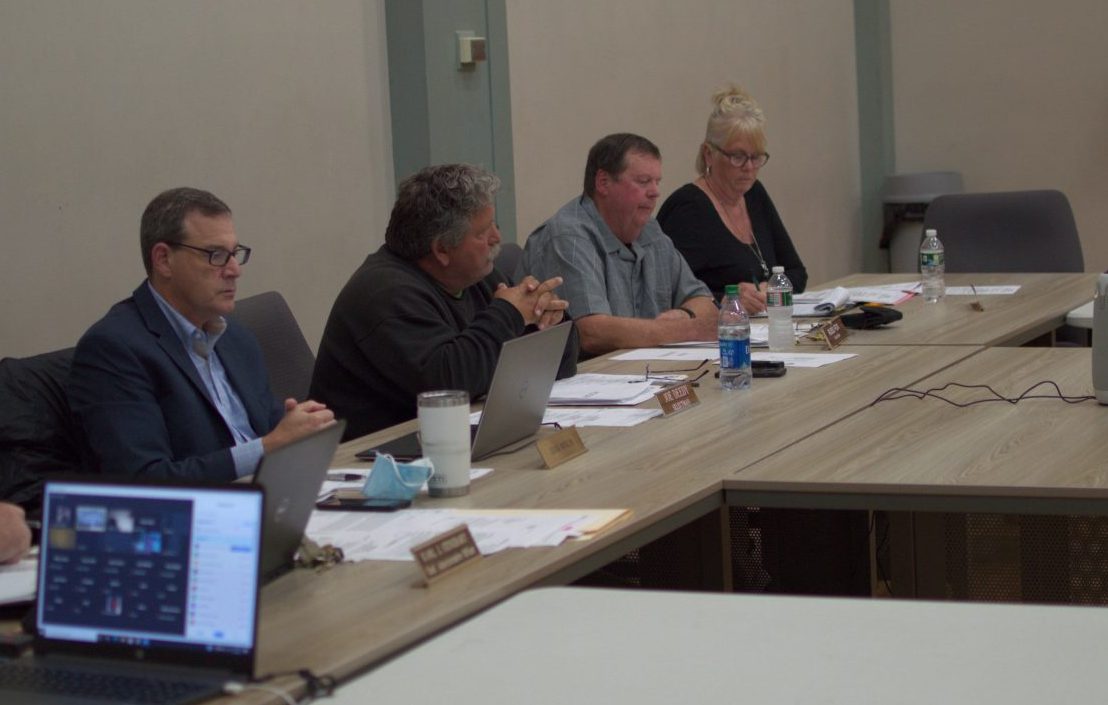 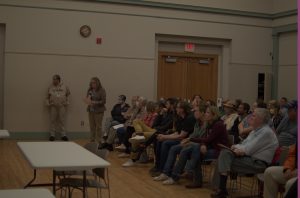 Diane Gale, a member of Save Southwick, was the first person to call for Russ Fox’s resignation during the Oct. 4 Select Board meeting. (PETER CURRIER/THE WESTFIELD NEWS)

SOUTHWICK — Members of Southwick’s Select Board faced calls from the public to resign from their positions after the board voted to remove three commissioners from different town commissions.

During the Oct. 4 Select Board meeting, members of the public used the public comment portion to call out the board for removing Maryssa Cook-Obregon, Chris Pratt and Dennis Clark from their commissions during the Sept. 27 meeting. Rose Hanna and Kevin Solek were appointed to one-year terms on the Conservation Commission and Bob Mucha was appointed to a one-year term on the Agricultural Commission in their places.

Michelle Pratt, Chris Pratt’s wife, accused Fox and the Select Board of engaging in nepotism and “cherry picking people that would support their agendas.” 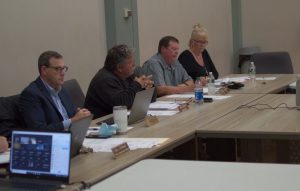 “Who did you get for Con Comm? You picked somebody who is a violator of the laws that they are supposed to be protecting,” said Pratt, “You picked somebody who has an order of condition with the Conservation Commission and the Department of Environmental Protection. Someone who violated the Clean Waters Act, the Wetland Protection Act, and the Endangered Species Act, as well as local bylaws.”

Chris Pratt had accused Kevin Solek, who was appointed to Conservation Commission by the Select Board on Sept. 27, of those same actions the day after Pratt was removed from the commission.

Fox was acting as Select Board chair during the Sept. 27 meeting while Chair Joseph Deedy was working at the Big E, making the dismissals and new appointments in a 2-0 vote with member Douglas Moglin. Deedy was present for Monday’s meeting.

Michelle Pratt said that the dismissals were not a result of their opposition to Carvana, but their advocacy for land preservation in Southwick in general.

“They were dismissed because of their advocacy and promoting land preservation and following the law instead of the Select Board agenda,” said Pratt.

Diane Gale, a member of Save Southwick, said that the Select Board members were removing opposition to their own will from town boards and commissions.

“Mr. Fox, it was reported last week that you are criticized for appointing the same people every year. That criticism was about cronyism, not about qualified commissioners being reappointed,” said Gale, “With your recent little game of new appointments, you have demonstrated that the criticism is valid, and you are either deaf to it or defiant towards it.”

Gale was the first person to directly call for Fox to resign.

“I, and so many others, have no confidence in Mr. Fox’s ability to lead fairly and openly in this town, and today, Chairman Deedy, I am calling for Vice Chair Fox to resign immediately,” said Gale.

Multiple other residents and Save Southwick advocates echoed comments by Gale and Pratt by calling for Fox, and in some cases the entire board, to resign immediately. Fox said the following morning that he thinks people have the right to express their opinions, but he did not intend to resign. 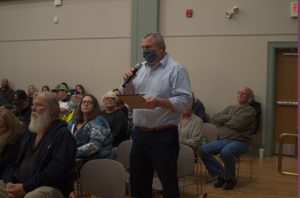 Planning Board Chair Michael Doherty suggested that there may be legal issues with how the Select Board went about the commission removals. (PETER CURRIER/THE WESTFIELD NEWS)

“I got elected and I serve at the pleasure of the voters of Southwick,” said Fox the following day. “I make decisions that I feel are in the best interest of the town of Southwick. I am going to continue doing that job.”

Fox said that Cook-Obregon in particular was removed because of her actions on social media in organizing an unsanctioned Agricultural Commission meeting in the spring, after the originally scheduled meeting had somehow been canceled. He said his decision to remove the three members had nothing to do with whether they were for or against the Carvana project, a proposed 200,000-square foot vehicle processing center on what is now farmland on College Highway.

Fox would not say why he chose to dismiss Pratt and Clark. When asked about allegations that he had threatened Pratt with “unfriendliness,” he said that he only told Pratt that the issue at hand would be discussed at the Select Board, which would then end up in the newspaper and become unfriendly press for Pratt.

“If he considers that a threat, I am sorry,” said Fox.

“Those chairs were elected by their peers on the commission, and I think that election that they had gotten should also be respected during the appointment process,” said Doherty.

He said that there may be legal issues with the appointment terms. Both the Agricultural and Conservation commissions are supposed to be three-year terms.

“Starting a couple years ago, each of the members were appointed for one-year periods of time. I don’t think that is proper or authorized by any mechanism,” said Doherty.

He suggested that Cook-Obregon, at least, still had time remaining in her term. He also took issue with Cook-Obregon being removed from the Master Plan Advisory Committee, a seat she had been granted already by the Agricultural Commission before her removal.

“I thought we were going pretty well. I thought we were able to bring the community a little bit back together, and we had a pretty diverse group on the Master Plan Advisory Committee,” said Doherty. “Unfortunately I think there is [collateral damage] from the lack of appointment of these three members, especially Maryssa, who was appointed to the Master Plan Advisory Committee.”

He said he expects to come to the next Select Board meeting to discuss revisions to the Master Plan structure, and that he expects Maryssa to be put back on the MPAC.

Immediately following the meeting, Cook-Obregon said she felt unsatisfied by how the meeting had gone, though she was encouraged by Doherty’s speech about getting her back on the MPAC.

“Those points he brought up were all valid points, and I know they were legally researched points, so if that is the potential angle in which to dig in a little deeper and get some answers,” said Cook-Obregon. “It also opens the possibility of transcending the municipal level and looking for answers at the state levels. If that is the only way to achieve accountability, then that is what we will do.”