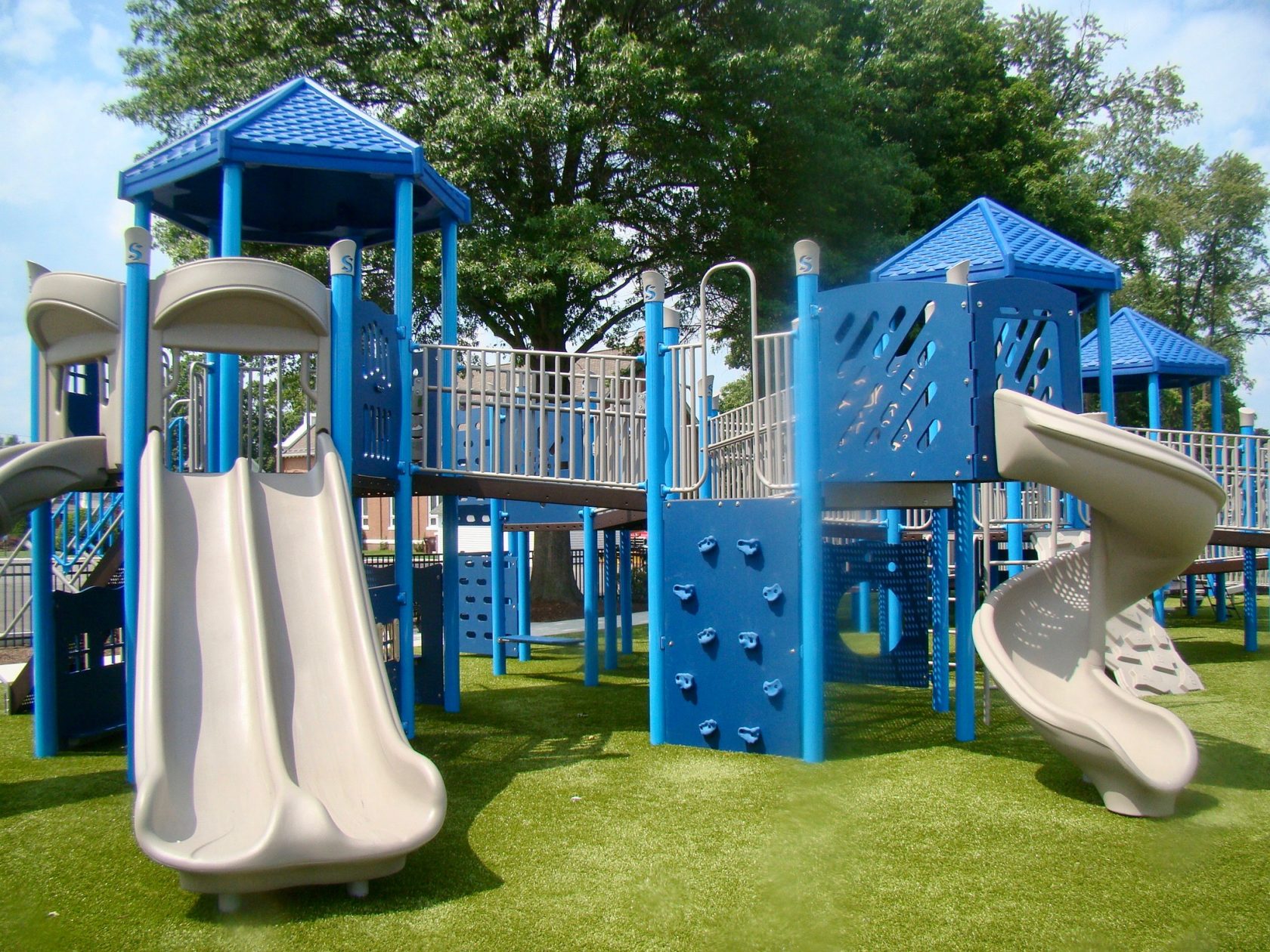 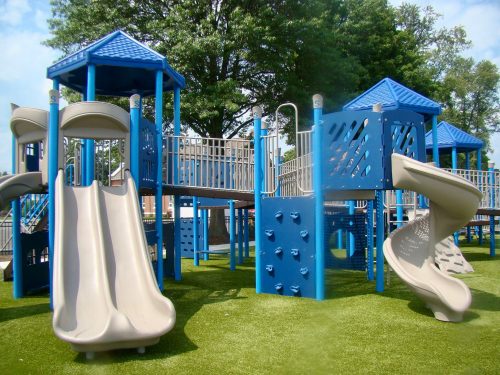 WESTFIELD – The all-abled playground at the Cross Street Park is now open from dawn to dusk, and ready for children of all ages and abilities to explore, climb, swing, slide, and enjoy. There are ground level activities for little ones, with climbing walls, tunnels and smaller slides, and climbing rings and bigger slides in the taller section for bigger kids. 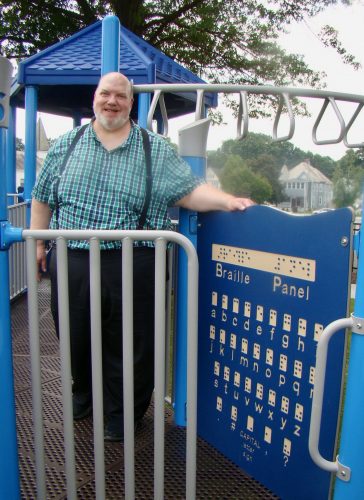 Sensory and educational panels are embedded throughout the structure, with a Braille alphabet, gears to move, a happy-faced analog clock and a musical piano panel. There is also a swing set at a safe distance with an adaptive swing.

One of the aspects of the playground that makes it accessible to all children is the ground covering, a silica-based “forever lawn,” that looks like grass but is green fabric over silica sand that is made for safety.

The ground covering was one of the aspects that parent Mandy Riel Rodriguez first spoke about when she initially approached the mayor (then Daniel Knapik) and city council more than five years ago about building an all-abilities playground, one that her daughter with cerebral palsy could access and play together alongside children of different abilities. A swing set with an adaptive swing is a safe distance from the playscape. (AMY PORTER/THE WESTFIELD NEWS)

Riel Rodriguez told the council that wood chips are difficult for children in wheelchairs, and the only covered swing in the city at the time was often broken due to heavy usage.

Community Development Director Peter J. Miller heard her and took up the challenge to find a location for the park and make it happen.

Initially, Miller, teaming up with landscape architect Rob Levesque of R. Levesque Assoc., designed an accessible playground to fit in the Hampton Park Pond renovation. They applied for a Parkland Acquisitions and Renovations for Communities (PARC) grant of $400,000 that was denied due to the need to remove trees to make room for the play structure. 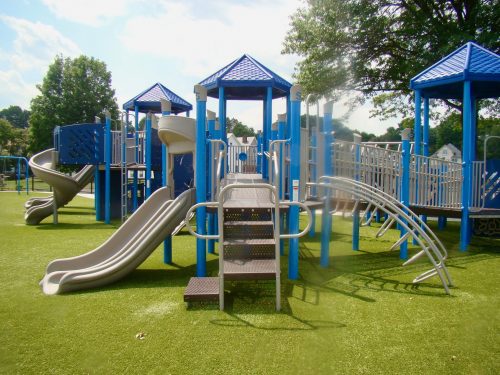 After the new elementary school building project turned from Cross Street Park, the former site of the Ashley Street Elementary School, to the current Franklin Avenue location, Miller and Levesque moved their design plans to the Cross Street Park, where Levesque also did the survey work, and funding started to come together.

The first grant for the all-abled playground came from the Commission for Citizens with Disabilities, which altogether contributed approximately $80,000 for the structure. Riel Rodriguez raised $400 through a gofundme account. Miller applied two more times for the PARC grant, succeeding on the third try. 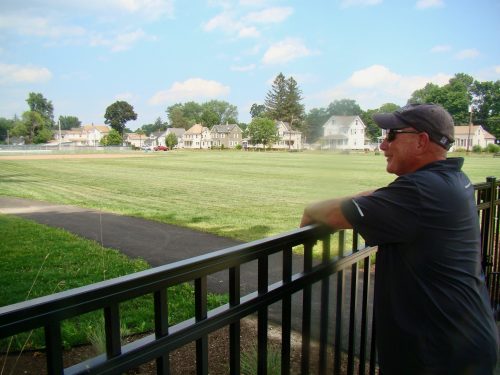 The mayor’s office and city council unanimously besupported the project, and approved a grant of $300,000 from the Community Preservation Commission, and another $200,000 from stabilization. Miller said of the $980,000 total cost for the park renovation, the construction work, which was done by H.M. Munes Construction out of Ludlow, cost $600,000, including $175,000 for the playscape and $200,000 for the forever lawn, with the remainder going for a new ballfield, open space, walking path and other improvements to the rest of the park. Miller said the budget came in on target.

A final $50,000 was granted by the city council for the parking area, which was designed by Jeremy Cigal and the Engineering Department who worked with on-call contractors to do the work inhouse. Cigal also helped Miller with the final review of the bid documents for the park. 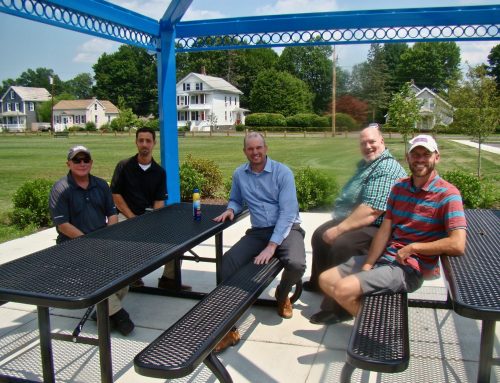 Miller said it’s been a major cooperative project between departments in the city, including the Commission for Citizens with Disabilities, Parks & Recreation, Engineering and Community Development.

The playground and renovation is now 95 percent complete, according to Miller and Levesque. Unfinished details include a metal roof on the pavilion for shade and overseeding the grass in September to ensure a lush return in the spring, aided by irrigation installed by the Public Works Water Department.

Scott Hathaway of Parks & Recreation, which now owns and maintains the park, also planted twelve trees through the Greening the Gateway Cities program. Hathaway said he will plant more.

Miller said most nights when Little League baseball is going on, there are a lot of kids playing on the playscape after 4:30 p.m. “It’s been a hit so far,” he said. 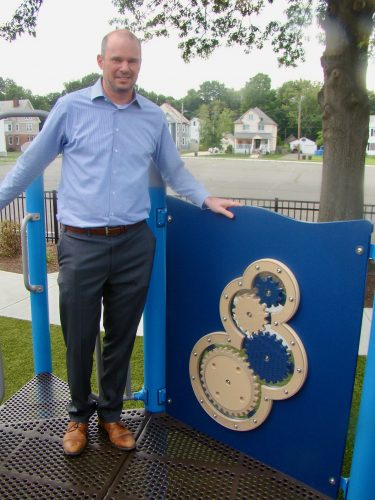 “This has been my favorite thing I’ve worked on over the past few years. It really fits into the community development world where we’re trying to improve old neighborhoods,” Miller said, adding, “It’s a good contribution to the neighborhood.”

Humason said he brought his son Quinn, now almost 10, to the playground recently while his wife was shopping nearby. “The review was great. He wanted to stay and play,” Humason said.

“It makes me wish I was a kid again. A lot of work went into this park, for years. Now that it’s complete, I hope a lot of people will use it. My son and I will definitely come back. It’s not just for people in the neighborhood, but for people on the bike trail,” Humason said, pointing to the nearby Rail Trail section visible from the park. “Anyone can use it,” he added.

A grand opening of the Cross Street park and playground is being planned for later this summer.