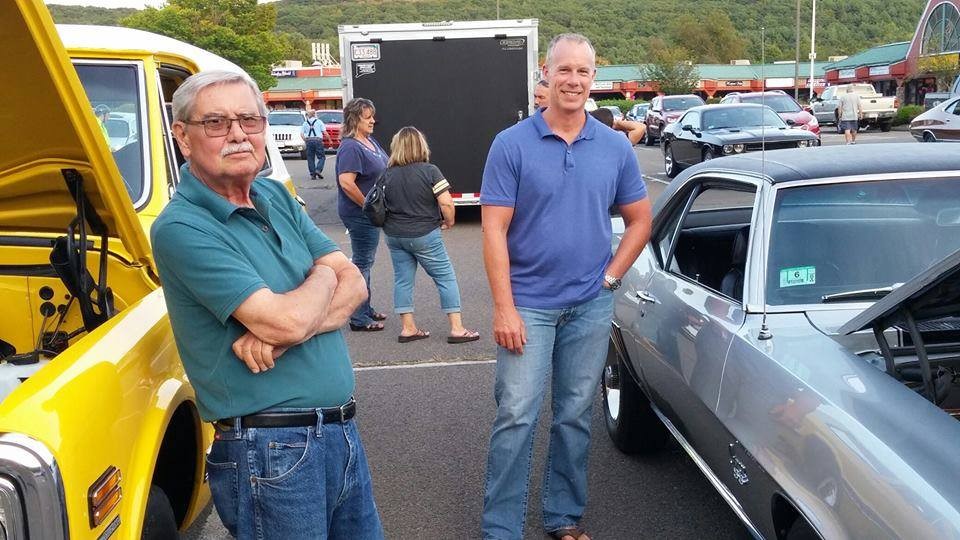 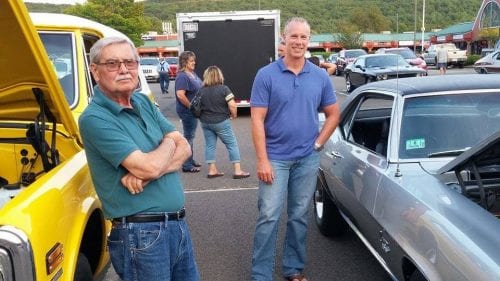 WESTFIELD – Every Tuesday evening from 5 p.m. to dusk through Sept. 17, scores of car enthusiasts gather at Hampton Ponds Plaza for “Cruisin’ with Bruce Marshall.”

Marshall, a DJ, owner, vice-president and general manager of Valley’s Classic Hits 97.7 FM, started the Hampton Ponds event in August, 2017, shortly after he had added the FM station, formerly Real Oldies 1250 AM, which he said he had “re-imaged and refreshed.”

Marshall and his “partner-in-crime” Gary Francis, both car enthusiasts, decided to bring the music and a car, truck, and bike cruise to Hampton Ponds Plaza., near where Marshall lives. He said all makes and models of cars, all years, are welcome. They generally get 60 to 75 cars a week.

“There are some wonderful vehicles. The car show community is very tight-knit,” Marshall said, adding the season is 15 to 16 weeks long, and the community makes the most of it.

While an enthusiast, Marshall himself doesn’t own a classic car, but “cars and music really go together,” he said. 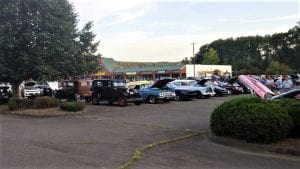 The show is weather-permitting. Marshall said some of the cars are worth $100,000, so owners don’t want to bring them out in the rain, and people won’t be able to look at them anyway. If this Tuesday’s show (Aug. 13) is cancelled due to the rain that is forecast, Marshall said he will be back the following Tuesday.

The goal is to raise money and gain awareness for veterans groups.
The car show is free, but proceeds from a 50/50 raffle go to non-profits serving veterans. This year, organizations being supported include Project New Hope, the Warrior’s Art Room, and Vet Air, the newest to participate. Marshall said Vet Air pays air transportation for military family members needing medical attention.

Each organization gets involved on their nights with volunteers to greet people, and an information booth to let them know about their services. “It’s very important that they’re part of the whole process. That was the plan,” Marshall said, adding that a couple of sponsors, DeNardo Auto Sales, Carquest Auto Parts and Genden Auto Parts, cover his expenses.

“It’s great for the community, the Plaza and businesses. The Plaza is very much involved,” Marshall said.

While Cruisin’ with Bruce Marshall at Hampton Ponds is the only show he personally owns, he also brings the music and participates in other car shows throughout the season. Marshall said it all started with the Florence Elks Lodge, 15 years ago, after he had just started the AM radio station.

“Two gentlemen picked up the phone, and said they would like to do a fundraiser car show,” said Marshall. The Florence Elks car show is still held every Thursday night.

“It went from that one show to shows every night of the week,” Marshall said. Now he’s the car show guy, with people coming up to him, telling him they want to start a car show. 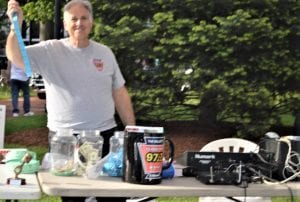 Other shows he participates in every week include Monday nights in Springfield’s Court Square and Friday’s at Tom’s Famous Long Hot Dog & Grill in Whately. He also does specialty shows on weekends.

“I took the love of cars and music and put them together, and created what we have now, Cruisin’ with Bruce Marshall,” he said. Photos from the shows and upcoming events may be found on the Facebook page with the same name.