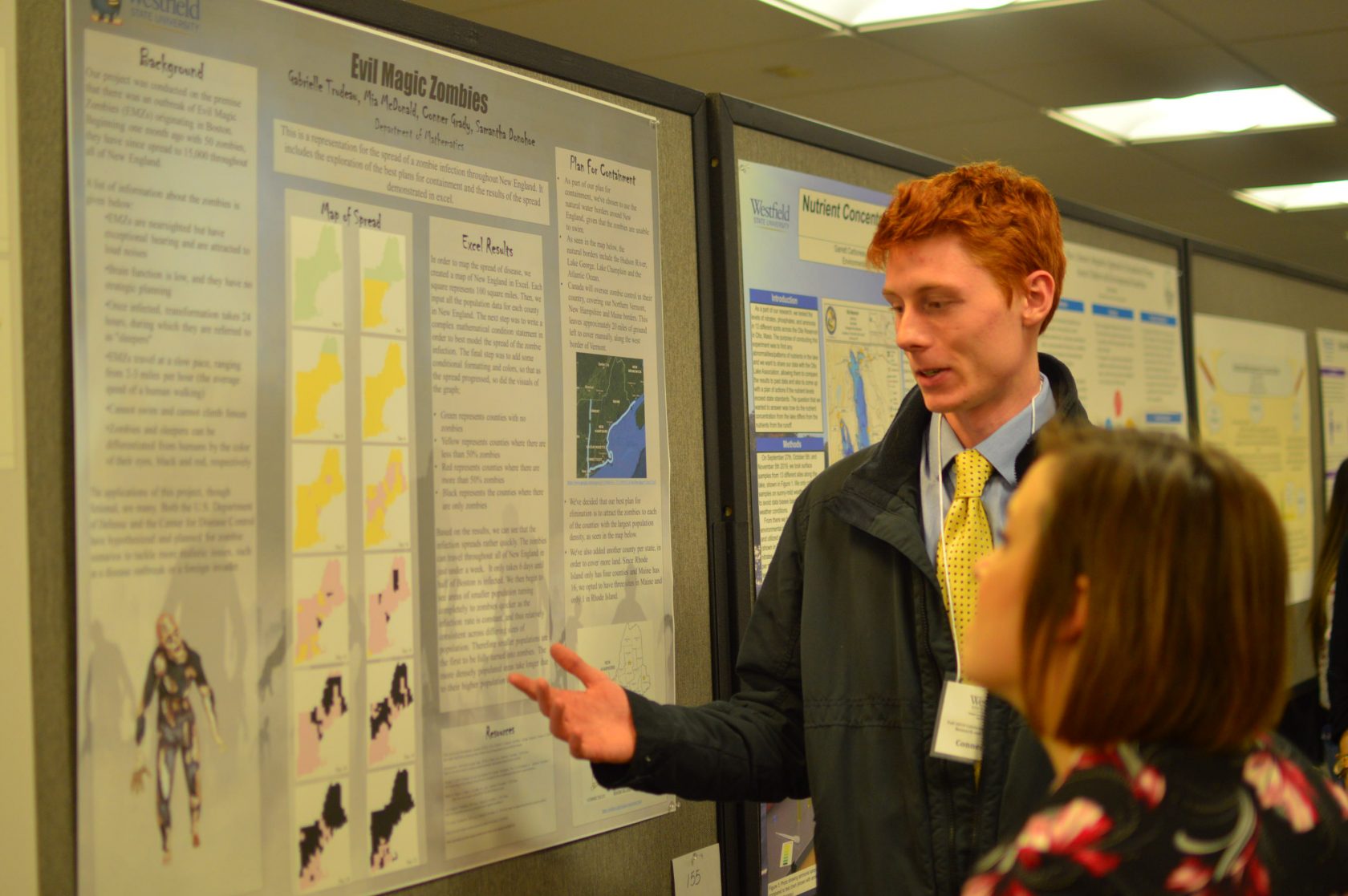 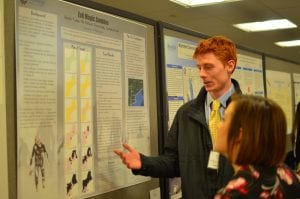 Conner Grady, one of four students to work on this research projects, explains their findings on a theoretical zombie outbreak in New England. (Photo by Peter Currier)

Spencer Van Tassel (left) explains his research on LGBTQ and Native American representation in schools to a fellow student. (Photo by Peter Currier)

There was no particular theme as there was during the Spring CURCA celebration earlier this year. That event took place near the climax of the Westfield 350 celebrations, and many of the research projects related to or used data representing the City of Westfield.

“Looking at a lot of the projects I think I see a lot of creative work in the English dept relating to Native American tribes and how they’re depicted in movies and US culture,” said Jarvinen ahead of the celebration.

She added that she is seeing that a lot of the projects have themes relating to some current events and national debate. Some students have done research on the effects of vaping while others have taken a look at the effects of social media as a whole.

Some students were given the space in the Arno Maris Art Gallery in the Ely Campus Center to give oral presentations on their work. One student, Li Xuanyi, gave a presentation on the views Chinese citizens hold towards American foreign policy towards the Asian superpower. Li Xuanyi is a Chinese exchange student to WSU.

Yasmen Maytham did her research on some of the possible unnoticed effects of climate change. (Photo by Peter Currier)

Another student, Yasmen Maytham of the Class of 2020, showed off her research focusing on the effects of human-caused climate change on season groundwater variation and transpiration in deciduous and coniferous forests. Her research consisted of analyzing the groundwater in eight US states depending on the type of local climate and forest type. Her results indicated that there was no correlation.

Other students did research on the real world possibilities of fictional scenarios. Students Mia McDonald, Samantha Donohoe, Conner Grady, and Gabrielle Trudeau looked a theoretical model of the outcome of a zombie outbreak in New England if “Patient Zero” started in Boston. They based some of their research on existing theoretical plans made by the Centers for Disease Control in the event of an outbreak of zombies. 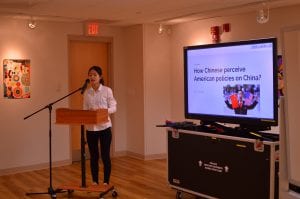 Other students explored real social issues facing different ethnic groups in the US. Student Spencer Van Tassel did research on the overall views of LGBTQ peoples held by Native Americans. He also highlighted what kinds of representation both groups of people receive in various forms of media and the education system.