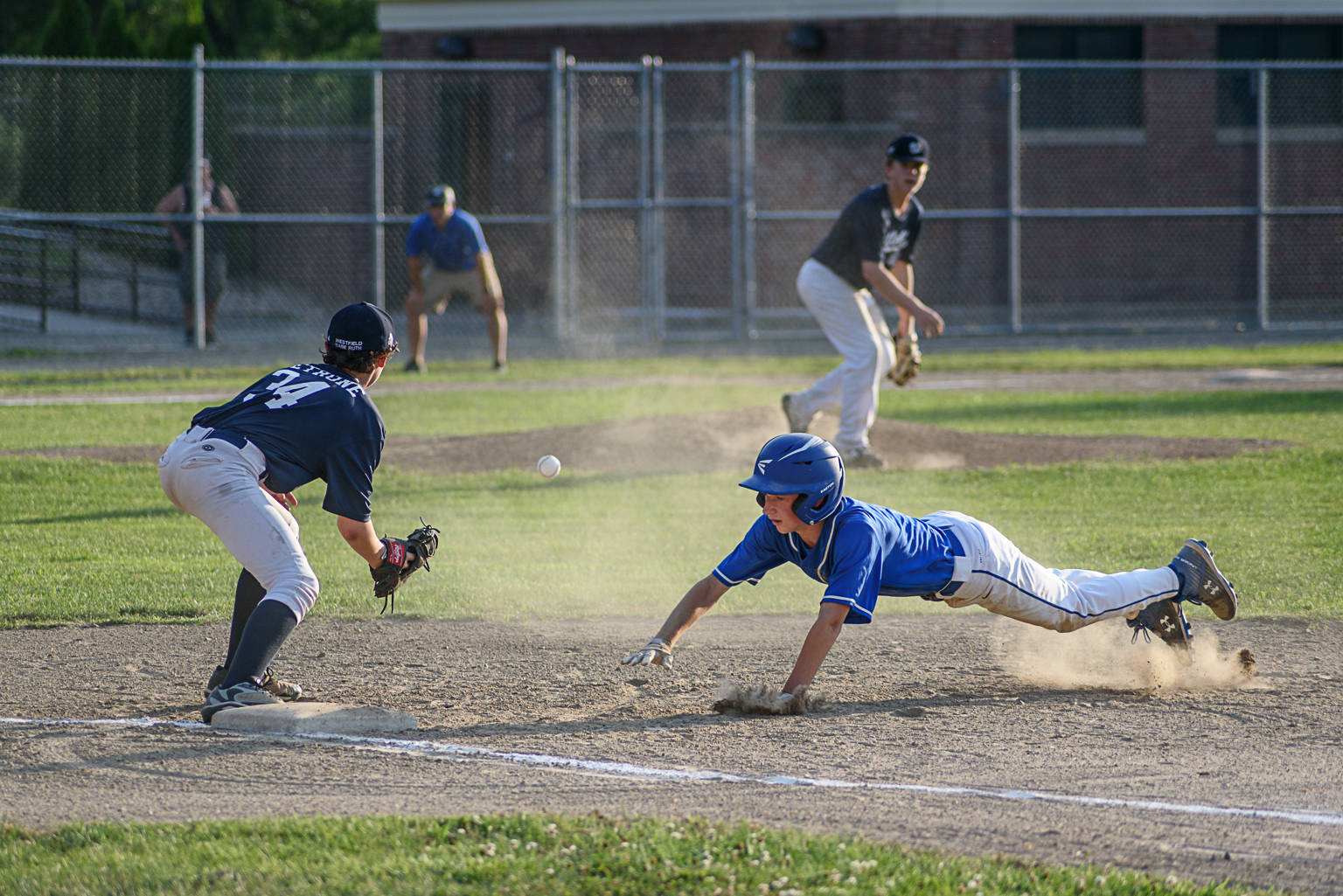 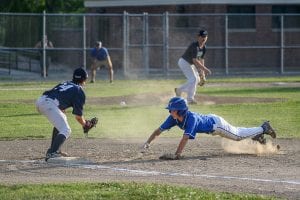 WESTFIELD – The World-Series bound Westfield Babe Ruth 13-Year-Old All-Stars got their first taste of pressure-packed baseball taking on Dalton in the Pioneer Valley Youth Baseball League’s Sandy Koufax playoffs.
Westfield rallied from a 2-0 deficit, tying the game at 2-all before falling late to Dalton 3-2 Tuesday night at Bullens Field.
“It’s a good learning experience for us,” Westfield manager Dick Lenfest said. “You say the word ‘playoff’ and kids act a little bit differently as opposed to a regular season. All this is great experience and preparation for coming up in August.”
Westfield is the host city for the 2019 13-Year-Old Babe Ruth Baseball World Series Aug. 8-15.
“This is a good experience,” Lenfest said.
Dalton jumped on top of Westfield starting pitcher Jacob Mello early.
Ryan Marauszwski walked and stole second base. Brayden Melle singled. Pat McLaughlin drilled a run-scoring single up the middle. Mello came back by forcing a ground out. A subsequent run down between third base and home plate resulted in the second out of the first inning. Mello then struck out the next batter to end the inning.
Westfield threatened to tie it or take the lead in the third, following a walk from Colby Lapoint and a single from Eli Petrone. Dalton starting pitcher Ben West forced a ground out from the lead-off batter, and then a line out that turned into a double play when second baseman Ryan Adam snared a fast-dropping liner just before it touched the dirt and doubled off the base runner at first, who was caught between the bags.
Dalton doubled up their early advantage with another run in the fourth. West reached on a hard-hit shot at the third baseman and stole second base. John Cebula singled through the left side. With runners at the corners, Charlie Wendel hit a sac-fly RBI to center field to make it 2-0.
Westfield threatened to tie the game again in the bottom half of the fourth inning. With two outs, Emmett Garfield smacked a line drive single up the middle of the field, then stole second and third bases. Andre Phaneuf walked and stole second. West forced a ground out though to end the inning.
Dalton’s defense continued its brilliance in the inning, robbing Mello of a line drive base hit when the shortstop, McLaughlin, made a leaping grab.
Westfield finally made it a new game in the fifth. Paul Lawry singled to left field. Evan Grant walked. Eli Petrone then laid down a perfect bunt. West fielded the ball and sailed it well past the first baseman. Two runs scored. West stranded a runner at third base though, retiring the next three batters in succession via fly out, line out, and ground out.
Small ball nearly got Westfield the lead.
In the sixth, Connor Niemiec reached on an infield error. Garfield moved Niemiec over with a perfect sac-bunt. Niemiec advanced to third on a two-out wild pitch. Dalton reliever McLaughlin got out of the inning unscathed though with a ground out to end the inning.
Heavy bats gave Dalton the boost it needed late.
With two outs in the seventh, Melle hit a booming double to deep left field. McLaughlin ripped a single deep to the left side of the infield. West followed with a rope to right field, scoring the game-winning run.
Westfield could only manage a lone base hit off reliever McLaughlin in the bottom of the seventh.
Westfield returns to action Wednesday against Mohawk at Westfield State University’s Bud and Jim Hagan Field at 5:30 p.m.
Lenfest said he will work with his young ballplayers in fine-tuning their situational offense.
“You can expect our kids are going to be very enthusiastic,” Lenfest said, regarding the upcoming World Series. “We’re going to play very hard, and hopefully we are going to be fundamentally sound.”
“You’re going to put more fans in the seats than there have ever been,” he continued. “They’re going to be playing under the lights. And they’re 13 years old. It’s a good opportunity. Hopefully they can shut down the noise, come out, have fun and play baseball.”