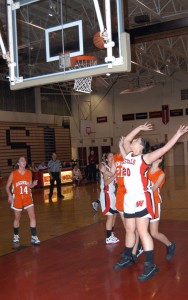 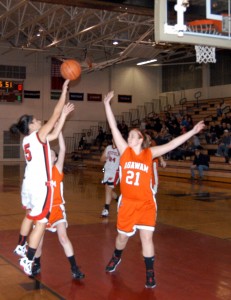 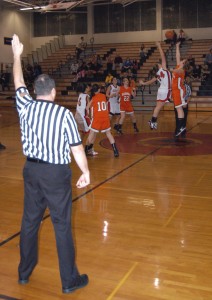 WESTFIELD – For the first time in Westfield High School girls’ basketball coach Tim Sicard’s four-year career, the Lady Bombers won their season opener.
Westfield posted a fourth-quarter rally and held on to defeat Agawam 44-40 in the Bombers’ tip-off at home last night.
Westfield floor general Beka Santiago, a sophomore guard, distributed the ball evenly on offense. At halftime, seven players had broken into the scoring column for the Bombers. Agawam’s A. Pitrowski and A. Busco combined for 17 of 19 Agawam points in the first half.
Pitrowksi, who netted 11 points in the first half, finished with 21. But the Brownies offense became a bit predictable and the Bombers buckled down in the final minutes.
Westfield worked the ball inside late to Keri Paton (12 points) and Carina Soto for two big baskets to maintain a two-score lead. When Agawam cut the lead to two in the waning seconds, Santiago converted two free throws to seal the game.
“We really wanted it coming out,” said Santiago, whose three-pointer in the opening minute of the fourth quarter helped the team rally from a five-point deficit. Sydney Ezold drained a 3 to open the quarter.
“We’ve gone from zero wins to five wins,” Santiago explained. “Hopefully, we will get 10 wins and into the playoffs this season. We’re definitely going to leave it all out on the court.”
Santiago finished with nine points. Evan Tapases had eight.
“We have more people who can score with the ball (this season),” coach Sicard said. “We don’t have to depend on any one person.”
Sicard said he was pleased with the effort of his entire team, but also noted that the Bombers have to cut down on the turnovers to maintain success.
The coaching staff credited Paton, Soto, and Melissa Welch for helping limit Agawam’s top guns late in the game.