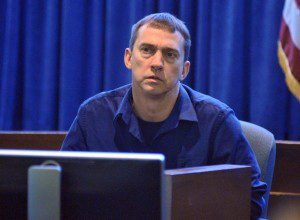 Mark Oleksak, a witness for the prosecution in the murder trial of Cara Lee Rintala, is cross-examined by the defense in Hampshire Superior Court in Northampton ysterday. (Photo by Kevin Gutting, Daily Hampshire Gazette)

By BOB DUNN
@BDGazette
NORTHAMPTON — Prosecution witness Mark Oleksak spent more time in court yesterdy explaining his relationship with Annamarie Cochrane Rintala and his whereabouts the day she was killed.
Oleksak’s wife and daughter also testified about his activities on the day the woman with whom he admitted having a “financial” and “emotional” affair was strangled.
Annamarie Rintala’s wife, Cara Lee Rintala, 47, has pleaded not guilty to a charge of murder in connection with her strangulation death in the couple’s Granby home March 29, 2010. 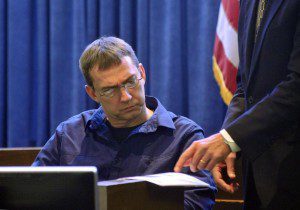 Mark Oleksak, a witness for the prosecution in the murder trial of Cara Lee Rintala, is asked by defense attorney David Hoose, right, to look over an exhibit in Hampshire Superior Court in Northampton yesterday. (Photo by Kevin Gutting, Daily Hampshire Gazette) 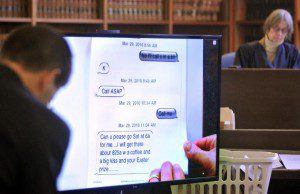 First Assistant Northwestern District Attorney Steven Gagne, left, places a portion of Exhibit 75 on screen for the jury to view during the murder trial of Cara Lee Rintala, with Hampshire Superior Court Judge Mary-Lou Rup, right, presiding, in Northampton yesterday. The exhibit is a log of texts exchanged by Mark Oleksak, in shaded text block, and the deceased, Annamarie Cochrane Rintala, on the day she was found slain in the Granby home she shared with her wife, the defendant. (Photo by Kevin Gutting, Daily Hampshire Gazette)

Her first trial ended with a hung jury and mistrial last March. Testimony in her retrial began Jan. 9.
Jurors also heard from the lead investigator, State Police Detective Jamie Magarian, including observations at the scene, tracing the routes Cara Rintala said she took while out of the house the day her wife was killed, and the couple’s financial records.
Magarian also testified that Oleksak and Annamarie’s ex-girlfriend Carla Danielle were interviewed more than a dozen times each, that they turned over DNA fingerprints and other material whenever they were asked, and eventually both were cleared as suspects.

Oleksak’s wife, Donna, and daughter, Shannon, both testified that he was with them the entire day at home and shopping for furniture for Shannon after he had gone to physical therapy and did some shopping on his own that morning.
Cross-examination
Oleksak’s testimony began Tuesday, coincidentally his 30th wedding anniversary. Cross-examination by Cara Rintala’s defense attorney David Hoose began Tuesday and continued into Wednesday’s session.
Oleksak said he and Annamarie Rintala met while they were working as paramedics in 2002 or 2003, and became very close friends as time went on.
Oleksak testified that Annamarie Rintala rarely took his advice. He had previously advised her not to marry Cara Rintala, not to adopt their daughter, Brianna, and not to move back in with Cara after the two reconciled.
Oleksak denied giving the advice out of jealousy, saying it was out of concern. Based on what Annamarie Rintala had told him about her relationship with Cara, he said, he didn’t feel it was healthy to move it forward with marriage, a child and moving back in together.
Despite rarely speaking with her between the summer of 2009 and February 2010, Oleksak still agreed to help collect some items from the South Hadley apartment Annamarie Rintala had moved into while separated from her wife, after she decided to move back in with her in Granby around September 2009.
One of those items, he testified, was a suitcase containing, among other things, a photo of Annamarie taken during a trip to Las Vegas with the woman she was dating and a card to her with the inscription, “Baby, I love you. You’ve made my life amazing already.”
Oleksak said he kept the photo and the card in his locker at work until the investigation into Annamarie Rintala’s death was underway and he turned them over to state police.
Despite lending her money and authorizing credit for her that she fell behind on repaying, and her not always being forthcoming with him about her relationships and whereabouts, Oleksak said he didn’t ever feel taken advantage of.
In total, he said, Annamarie Rintala owed him about $7,000 at the time of her death.
The last significant amount of money he lent her was $350, ostensibly for the purchase of a dog, which she apparently never purchased.
Oleksak characterized a text message he sent to her the day she was killed, saying he would come over that Friday night when her wife was at work, as “facetious.” He said it was a pointed, joking reference to a fight the couple had the previous evening about a male friend of Cara Rintala’s coming over while Annamarie was at work.
Hoose asked Oleksak why, when questioned by investigators about his whereabouts the day of Annamarie Rintala’s death, he only mentioned a couple of stops and not the more thorough accounting he gave on a subsequent interview, months later.
Oleksak testified that his memory on April 2, 2010, was affected by having learned earlier in the day that the cause of Annamarie Rintala’s death was strangulation and her death was ruled a homicide.
In testimony Tuesday, he said he authorized her as a user on three of his credit cards and assisted her with getting a cellphone account to help her rebuild her credit following a bankruptcy, all of which he tried to keep from his wife.
The pair had a falling out in the summer of 2009 when he advised against her rekindling a relationship with an ex-girlfriend while separated from her wife.
Detective on stand
Other testimony yesterday came from Magarian, who detailed the early stages of the investigation.
Magarian said he traveled the two routes Cara Rintala said she took from her Granby home to the Holyoke Mall and back with the couple’s daughter the day of her wife’s death.
In two interviews, she gave differing amounts of detail in the paths she took, and Magarian drove both of them himself.
The first route took about 54 minutes and covered about 30.7 miles. The second, more elaborate route, covered 43.1 miles and took around 75 minutes.
Prosecutors allege Cara Rintala deliberately drove in a haphazard fashion to allow enough time to build an alibi after killing her wife, staging a break-in and cleaning up the scene.
Hoose maintains she drove the roundabout route in order to be out of the house long enough to allow her wife to rest before her night shift as a paramedic.
Magarian described the lengths to which investigators went to recover evidence related to those routes, checking to see if any evidence might have been dumped along the way, including rooting through dumpsters and digging through a landfill, which turned up nothing.
Some rags, apparently from the Rintala house, were recovered from a McDonald’s parking lot in Holyoke. One of them matched other pink cloth diapers in the house, and another had a small stain that was a likely match for Annamarie Rintala’s DNA.
Hoose has said investigators made up their minds from the start Cara Rintala was responsible for her wife’s death and ignored any evidence that didn’t fit that theory.

Bob Dunn can be reached at [email protected]