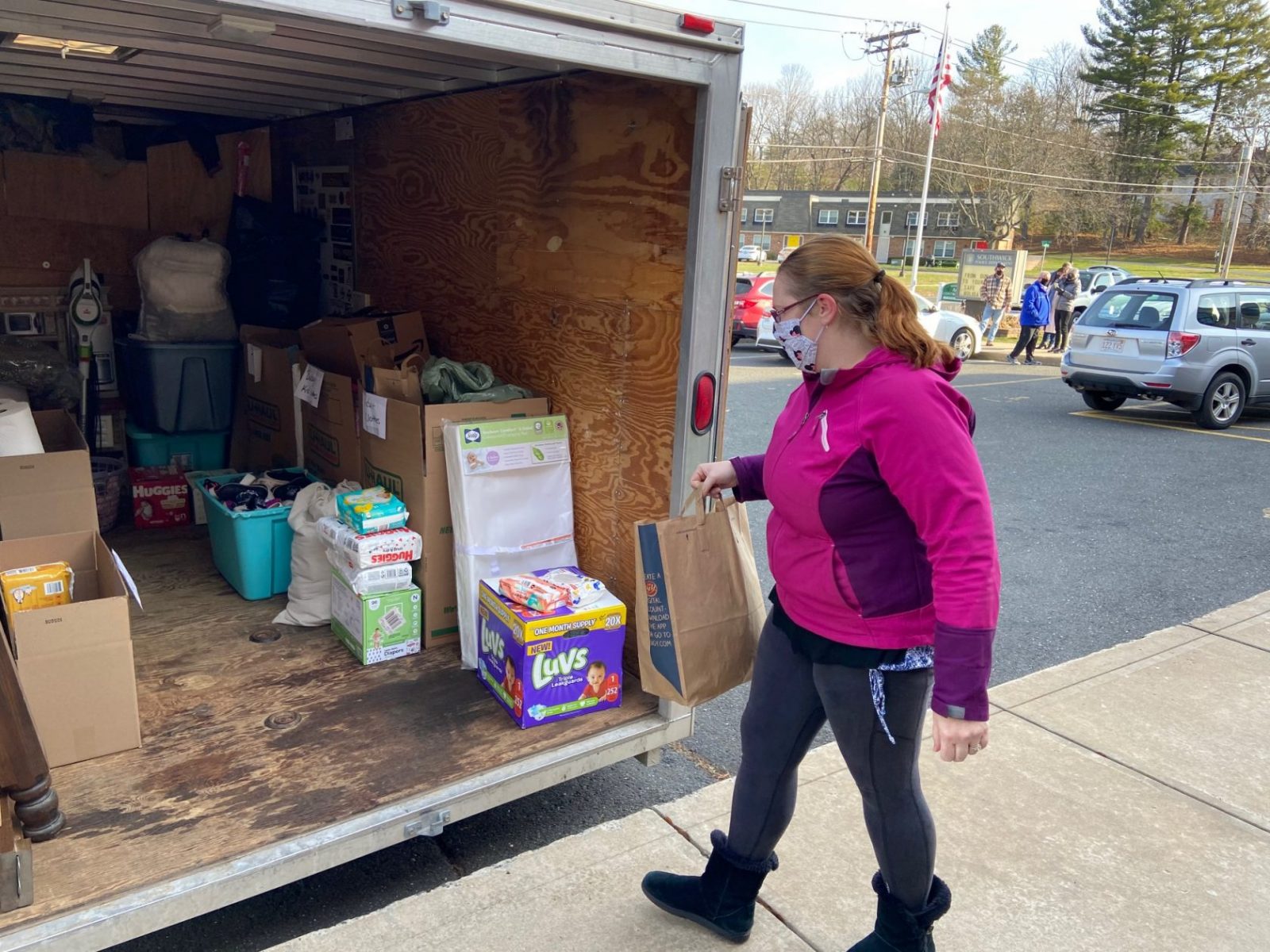 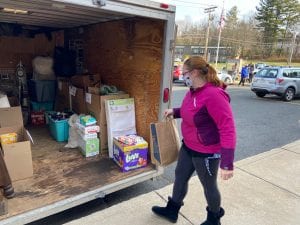 Christina Oleksak, of Westfield, drops-off a donation Dec. 11, 2020 for the Kozlov family who were diplaced due to a fire. A trailer was setup at the Southwick Police station for donations. (HOPE E. TREMBLAY/THE WESTFIELD NEWS)

SOUTHWICK – The community has come together to help one of its own.

After a chimney fire ripped through the Kozlov family home on College Highway earlier this week, residents of Southwick and surrounding communities rallied to collect donations to help the displaced family, which includes Daniel Kozlov, his wife, two-year-old daughter and son who was born just a few days before the Dec. 9 fire.

Kozlov said when he realized there was a fire in their home, he quickly got his family out of the house.

“First, I tried putting it out myself and got the fire extinguisher,” he said, “but I emptied it and the fire was still going. So, I got everyone outside and realized I didn’t have my car keys and I ran back in to get them and drove away from the fire.”

Southwick Fire and Police responded to the call around 3 a.m. The large structure fire was knocked down butthe house is currently uninhabitable.

Kozlov said they are staying with family nearby and his newborn son is doing well, as is his daughter. They are all grateful to their neighbors and others who are donating to the family.

“Sgt. [Tom] Krutka set up a trailer at the police station for donations. I want to say a big thank you to everyone,” he said.

Krutka said he was compelled to organize the collection after speaking with the Kozlovs the morning of the fire.

“They left everything behind – they had no shoes, no clothes – they lost everything but they got out and were safe,” Krutka said. “Their baby is just five days old, I can’t imagine that. They have insurance, but I wanted to collect donations to get them through the next few weeks.”

Krutka enlisted a friend to set up the trailer in the police parking lot through Dec. 11 and residents from town and surrounding communities brought items to help get them through until they can rebuild.

“When I heard what happened, I wanted to help and I had baby clothes to give,” she said.

“We bought our house two years ago, and we love it here,” he said. “And we have learned that everyone here has a big heart. You don’t really know people until something like this happens. In this situation you find out, and our neighbors are the best.”

Police Chief Kevin A. Bishop said he was proud of Krutka and the community’s response.

“It always amazes me . . . the outpouring of support and compassion that citizens have in this community,” said Bishop.

Kozlov said they plan to rebuild their home as soon as they can.

“The walls are still standing and we plan to return,” he said. “We are well, and our chickens survived, and that’s our home. We just want to say a huge thank you to everyone.”