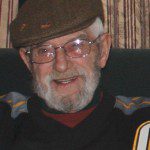 WESTFIELD – Donald “Burge” Mulville, 84, known to most as “Gomper”, a lifelong resident of Westfield, passed away at home on Friday, January 25, 2013 surrounded by his loving family. Donald was the son of the late Donald Mulville and Hazel (Hatch) Mulville of Westfield. He was a 1946 graduate of Westfield High School.
He leaves behind his five children; daughter, Donna Carlson and her husband David of Westfield; son, Michael Mulville and his wife Gail of Russell; daughter, Deborah McCarthy and her husband Daniel of Westfield; daughter, Kimberly Surprise and her partner Joseph Bercier of Westfield; and son, Brian Mulville and his wife Patricia of Westfield. In addition, he is survived by fourteen loving grandchildren; Dawn Whitehill, Jennifer Harnden, Casey and Courtney Carlson, Ryan, Ashleigh, and Katelyn Mulville, Christopher, Benjamin, and Abby McCarthy, Emily and Miranda Surprise, and Brad and Bridgette Mulville. He also leaves behind seven great-grandchildren; Amber and Kyle Whitehill, Tyler, Jacob, and Madisyn Harnden, Ethan and Ava Mulville and his constant companion, his dog John. He leaves behind his sister, Beverly Gamble of Westfield and many nieces and nephews.
Burge served his country in the U.S. Army as a member in the occupational forces in Germany following WWII and was a member of the American Legion Post 124. After his discharge from the Army, he began work as a steeplejack, eventually starting his own business, Mulville Steeple Service. Burge worked on many church steeples and buildings in the Pioneer Valley, including the Carillon Tower at Stanley Park, which he gold leafed several times. He also worked for Heineke Construction Company and Forish Construction Company from which he retired in 1990.
After retiring, Burge spent many happy hours in his home workshop where he repaired anything and everything. It was there that he began making custom weathervanes which he displayed at many local fairs. After the 1994 Winter Olympics he crafted a special figure skater weathervane for Olympic medalist Nancy Kerrigan from whom he received a personal thank you. Burge and his weathervanes were also featured on 22 News and in articles in the Westfield and Springfield newspapers. He was also recognized by the Westfield Historical Society for his tedious restoration of the weathervane that has sat atop Westfield City Hall for nearly a century.
Don had a lifelong passion for hockey. During the late 50’s and early 60’s, he was instrumental in forming what is now Westfield Youth Hockey, coaching many local young players. His own hockey experience consisted of playing goalie for several area men’s leagues. His position as timekeeper at the Eastern States Coliseum high school hockey games led to him becoming an Off-Ice Official for the American Hockey League. For 42 years he was a goal judge for the Springfield Indians, Kings, and Falcons. It gave him great pleasure to be involved with seven Calder Cup championships won in Springfield. In 2001 he retired from his seat behind the net when his wife Susan became ill. Donald took round the clock care of his loving wife for the last six years of her life. In December of 2011, Burge traveled to Pittsburgh with his daughter Deborah and her family to see his favorite team, the Pittsburgh Penguins, play two home games.
Calling hours will be Tuesday, January 29th from 4:00 to 8:00 p.m. at Firtion-Adams Funeral Service, 76 Broad Street, Westfield. Funeral and burial will be private and at the convenience of the family. Donations may be made to the Noble V.N.A. and Hospice, 77 Mill Street, Westfield, MA 01085.
firtionadams.com