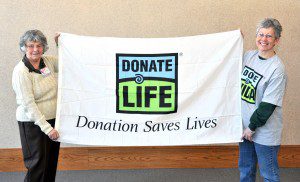 SOUTHWICK – Thirty Southwick families have been affected somehow by Donate Life – either as organ donors or as recipients.
Susan Sanders is one of those whose life was changed by Donate Life, a 501(c)3 not-for-profit alliance of national organizations and state teams across the United States committed to increasing organ, eye and tissue donation.
Donate Life America manages and promotes the national brand for donation, Donate Life, and assists Donate Life State Teams and national partners in facilitating high-performing donor registries; developing and executing effective multi-media donor education programs; and motivating the American public to register now as organ, eye and tissue donors.
“While increasing the number of registered organ and tissue donors that save and heal lives is part of our daily work, this month serves, not only to honor the lives of those who have given and received, but also as an opportunity to renew our commitment to saving lives ,” said LifeChoice Public Education Specialist Caitlyn Bernabucci.
This May 30, Sanders will mark the five year anniversary of the day she received a heart transplant. Sanders suffered from a heart condition for many years and was able to manage it with medication, until 2008.
“I just couldn’t control it with medication any longer and I was put on the waiting list for a heart transplant,” Sanders said.
Fortunately, Sanders received a matching heart fairly quickly.
“I was lucky that I only waited seven months,” she said. “It is determined by who is the best candidate, who is the sickest and who is the best match.”
Sanders said she was shocked to find out how many of her fellow residents’ lives have also been touched by Donate Life.
“I couldn’t believe there are 30 families, right here in little old Southwick,” she said.
Ironically, Sanders’ own family is good friends with another family who received the gift of life – The McCarthy’s.
Walter McCarthy received a transplant, as wel,l and his daughter is best friends with Sanders’ daughter.
“It was great that the girls could go through this together and had someone who understood,” Sanders said.
To raise awareness of the importance of organ donation, April is designated Donate Life Month. Southwick will honor those families affected in some way by organ donation by raising six Donate Life flags April 1.
“Flags will be at Town Hall, the Police Department, Fire Department, Town Common, Southwick Funeral Home and the American Inn,” said Sanders, adding that American Inn and Southwick Funeral Home approached her to raise flags.
Sanders, along with the McCarthy family and the family of Samantha Prokop, a young Southwick resident who died in an accident and donated her organs, will be at Town Hall April 1 for a brief ceremony and celebration of life. Sanders said the public is encouraged to attend.
Sanders stressed the gratitude she feels toward her donor family.
“I am so glad to be alive, and as a recipient I need to get the word out,” she said. “An organ donor can make a difference in someone’s life.”
According to donatelife.net, one donor can help eight people, and there are currently, more than 115,000 men, women and children are awaiting organ transplants in the United States.
There were 28,535 organ transplants performed in 2011 and 14,144 organ donors in 2011, according to Donate Life.
Sanders said it is rare for a recipient to meet the donor family but she and many others write letters letting them know how much they appreciate the gift of life.
“I write a letter every year on my anniversary and send it to Donate Life,” Sanders said. “I don’t know if the family ever reads them, but I will continue to tell them how grateful I am and how much their loved one’s donation means.”
Westfield will also recognize Donate Life month with a flag raising April 1 at 11:30 a.m. at City Hall. Other regional events include a free movie screening of Power of Two- A story of twin sisters, two cultures, and two new chances at life at 6:30 p.m. at The University of Hartford. This inspiring, award-winning movie documents the double lung transplants received by half-Japanese twins Ana and Isa Stenzel, born with Cystic Fibrosis, a fatal genetic disease that impacts the lungs and pancreas. They have emerged as authors, athletes and global advocates for organ donation. A short panel discussion about organ and tissue donation will follow. April 19 is designated National Blue and Green Day in support of organ and tissue donation.
LifeChoice Donor Services, Inc. is the federally designated, non-profit organ procurement organization (OPO) for six counties in Connecticut and three counties in Western Massachusetts with a combined population of 2.2 million people.  The OPO serves twenty-three acute care hospitals for organ and tissue donation and two organ transplant hospitals, Hartford Hospital in Hartford and Baystate Medical Center in Springfield.