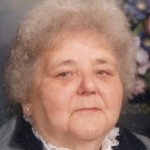 WESTFIELD – Dorothy J. (Urbanek) Luczak, 87, of Westfield died Tuesday, June 24, 2014 in Baystate Medical Center. She was born in Chicago, Illinois on March 21, 1927 to Stanislaw and Cecilia (Nawrocka) Urbanek.
Dorothy was educated in Poland and moved here when she was twenty-one years old. She worked as a cook at Kid’s Place in Westfield and as a housekeeper for Holy Trinity and St. Peter’s Rectory and retired from Burger King in 1999. Dorothy was a communicant of St. Joseph’s National Catholic Church and a member of its Ladies A.N.S.
She was the widow of Marian Luczak who died in August of 1984. Dorothy leaves a brother, Chester Urbanek of Woodbridge, VA.
The funeral for Dorothy will be held at 10:00 a.m. Saturday, June 28th in St. Joseph’s National Catholic Church. Burial to follow in St. Joseph’s Cemetery. Calling hours will be held on Saturday morning before the service from 8:45 a.m. – 9:45 a.m. from the Firtion-Adams Funeral Service, 76 Broad Street, Westfield. Donations may be made to St Joseph’s National Catholic Church, 73 Main Street, Westfield, MA 01085.
www.firtionadams.com