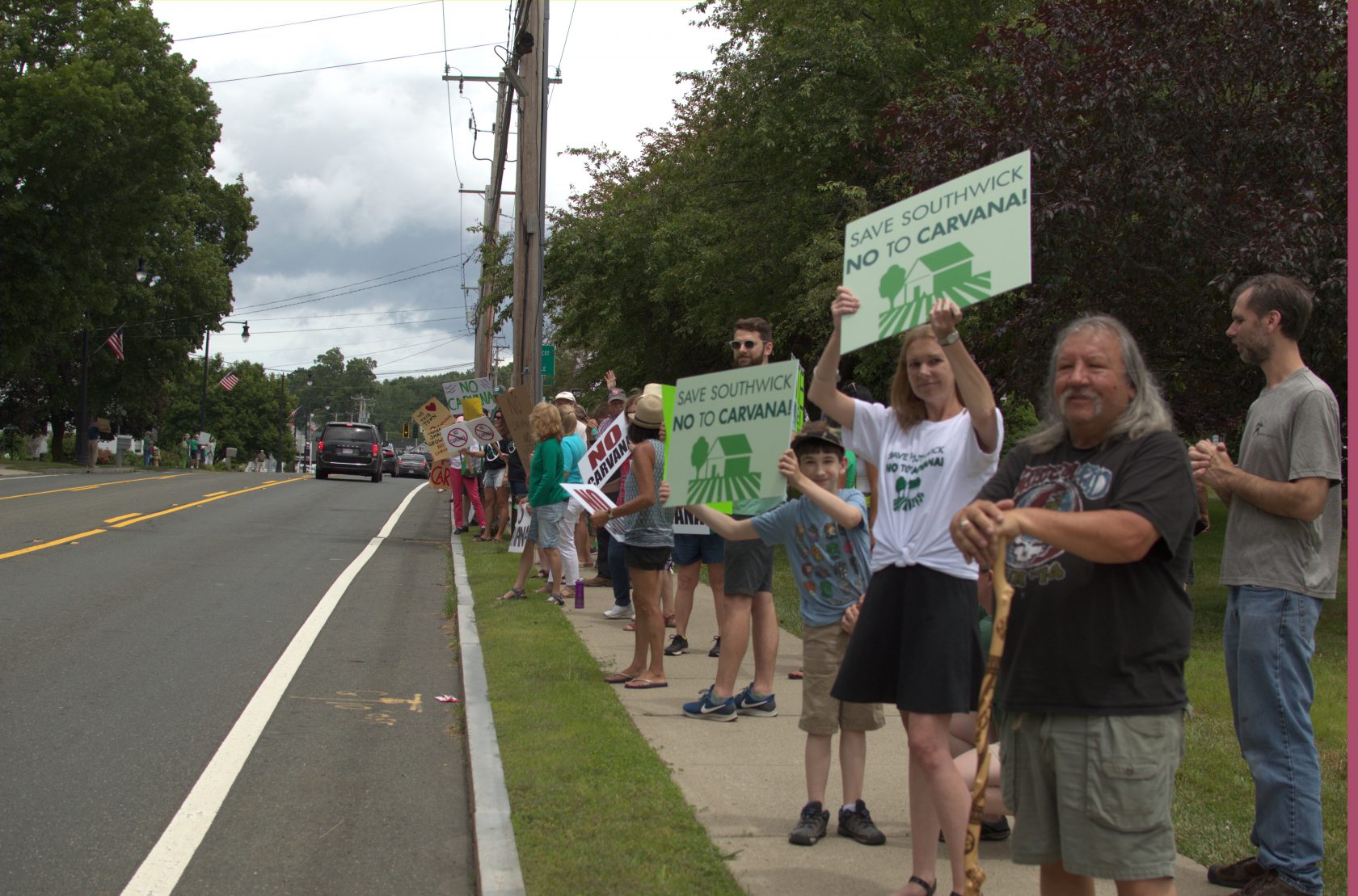 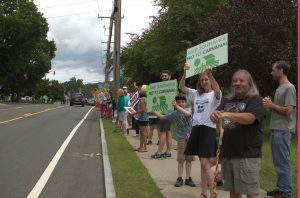 Protesters June 26, 2021 line the sidewalks in front of Southwick Town Hall to protest the proposed Carvana project being considered by the Planning Board. (PETER CURRIER/THE WESTFIELD NEWS)

SOUTHWICK- Dozens of protesters gathered outside of Town Hall June 26 to express their displeasure towards the proposed Carvana facility at 686 College Highway.

People began gathering at Town Hall at 1 p.m. and remained there until 3 p.m., chanting slogans and holding signs showing their opposition to the Carvana project. Carvana is a relatively new type of car dealer —  customers can purchase vehicles online, rather than having to go in person to a dealership, and have the vehicle delivered to them.

Carvana is looking to construct a vehicle processing facility in Southwick at College Highway and Tannery Road.

Protest organizer and creator of the “Keep Southwick Green No Carvana” Facebook page Kevin Meder said that he was shocked to actually see everybody show up for the protest at once. He described the crowd as “a cross-section of the town.”

Meder said he had never organized something like this before and was pleased with the results.

Many vehicles drove by the protesters and honked their horns, seemingly in support of their cause.

At 2 p.m., protesters congregated around the Southwick Town Hall entrance sign to hear some of the protesters and organizers speak about what will happen with the movement going forward. 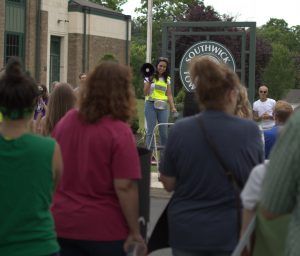 Maryssa Cook-Obregón addresses the crowd at the protest against the Carvana project on June 26. (PETER CURRIER/THE WESTFIELD NEWS)

Diane Gale, a lifelong resident of Southwick, told protesters that going from farmland to having more than two million square-feet of asphalt is “neither reasonable, nor compatible with the character and scale of this town.”

“The Planning Board’s declaration of purpose on the town website is to be responsible for overseeing land use within the town to ensure residents live in a safe and healthy environment,” said Gale.

Protest organizer and Agricultural Commission member Maryssa Cook-Obregón said that the protesters were there to “fight for the town’s future.”

“Once that land is gone, people, it is gone forever,” said Cook-Obregón, “We have come together today to ask for transparency and accountability.”

“Remember, if we lose this battle, it doesn’t mean we lose the war. It is just starting,” said Cook-Obregón.

After the speeches, protesters went back to the sidewalk to continue picketing. Several minutes later, a Toyota Prius sporting a full Carvana decal drove past, drawing boos from the crowd. The operator was observed giving protesters the middle finger. Some protesters said they saw him using his phone to take pictures or video of the protest while he was operating the vehicle. 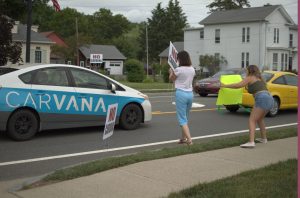 Two protesters jeer at the Carvana company vehicle that drove past protesters. The operator was observed showing his middle finger to protesters and using his phone to record them while driving. (PETER CURRIER/THE WESTFIELD NEWS)

The Westfield News reached out to Carvana on June 26 for a comment on the vehicle’s operator and on the protests against their company in Southwick.

Carvana did not return the request for comment by press time June 28.

Barbara Eddy, a resident of Southwick Village, formerly known as American Inn, told The Westfield News that most people in Southwick Village are opposed to the project. She said that she thinks that companies like Carvana will eventually become obsolete, which would leave Southwick with a large, vacant asphalt lot with limited uses. She said it would also take away from some of the reasons that she and her husband moved to the town in the first place.

“I’ve only lived in Southwick for four years, but I love this community,” said Eddy, “We moved here because it is so quiet and rural.”