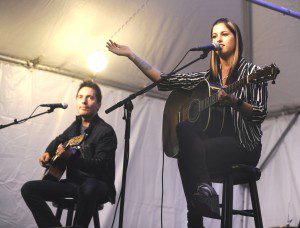 Cassadee Pope, the headliner for last night’s free MusicFest 2013 concert at Park Square, speaks to the audience as she starts her set. Pope was backed by Steve Fekete, left, and (not seen) Jim McGorman. (Photo by Carl E. Hartdegen)

WESTFIELD – Intermittent drizzle did nothing to dampen the enthusiastic embrace of city residents for the the Concert on the Green last night after a three-year hiatus.
Mayor Daniel M. Knapik, who welcomed a crowd of thousands back to the venue, said “This is why we did it all. We waited three years. This is exactly what we wanted.”
“We would never have been able to have a crowd like this on the old Green,” Knapik said. “The radio people (KIX 100.9) are projecting 4,000 people.”
The concert was coordinated by the Business Improvement District (BID), supported by a host of community institutions and municipal departments.
BID Executive Director Maureen Belliveau said the event was “a great night for the downtown, a great night for the city.”
“It was a real community event with people volunteering and sponsors. Folks just wanted to be a part of it,” Belliveau said.
The free MusicFest 2013 concert series is produced in a partnership between the BID and Westfield on Weekends.
Sponsors included Noble Hospital, Commercial Distributing Co., Inc., the Tavern Restaurant, the Westfield Bank and the Westfield News Group, with additional support from Advertus Media, Inc., Mina’s Wine & Spirits, Westfield Gas & Electric Department, Westfield State University and Elm Electric. 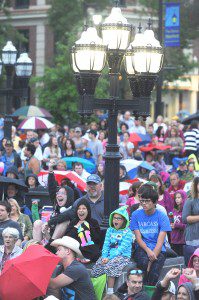 Elizabeth Beaulieu, 16, of Westfield and her sisters, Lauren, 10, and Emma, 8, cheer from their perch on the base of a lamp post at Park Square last night as they enjoy the MusicFest 2013 concert under the watchful eyes of their father. (Photo by Carl E. Hartdegen)

“I was thrilled with the diversity of the crowd, young families with children, a really wide range of age groups,” Belliveau said. “I was over the moon, and still haven’t come down yet.”
Belliveau said the first concert slated for June, but cancelled because of a thunder storm warning, has been rescheduled for Sept. 26 and will still feature Livingston Taylor.
The BID Concert Series Committee began planning this summer’s events last August.
“There are a lot of little details, coordination that people need to be informed about,” Belliveau said.
Police Chief John Camerota and Fire Chief Mary Regan and the staffs of their two departments, as well as the Department of Public Works, were involved in the public safety and traffic control aspects of the planning process. The section of Elm Street between School and Court streets was closed to traffic, with southbound traffic on Elm Street detoured to Washington Street.
The crowd spilled out of the Green, with many patrons setting up chairs on the Elm Street sidewalk in front of the United Bank and Westfield Atheneaum by the time Joel Crouse, of Holland, Mass., took the stage, opening last night’s country-themed show.
Crouse said it is a pleasure to have the opportunity to perform in his native western Massachusetts area. Crouse will be the opening act tonight and Saturday for the Taylor Swift Tour in Foxboro.
The featured performer last night was Cassadee Pope, the season 3 winner of NBC’s “The Voice,” a reality TV singing competition.
“It was just a lovely evening,” Belliveau said. “The downtown vendors seemed busy, seemed happy with the volume of customers.”
The vendors included the Tavern, which had three booths selling beer and wine, the Two Rivers Burritos Co. and MamaCakes, both of Elm Street, Soup’s On of North Elm Street and Allstar Pizza of School Street.
“The BID Clean Team were excellent with handling the trash. They worked hard and stayed on top of it all night,” Belliveau said. “At the end of the night, you couldn’t tell that we had been there.
BID also has concerts slated for Aug. 22 and Sept. 12, but are still negotiating with the performers at this time. Each concert brings a different type of entertainment to the Concert on the Green series.