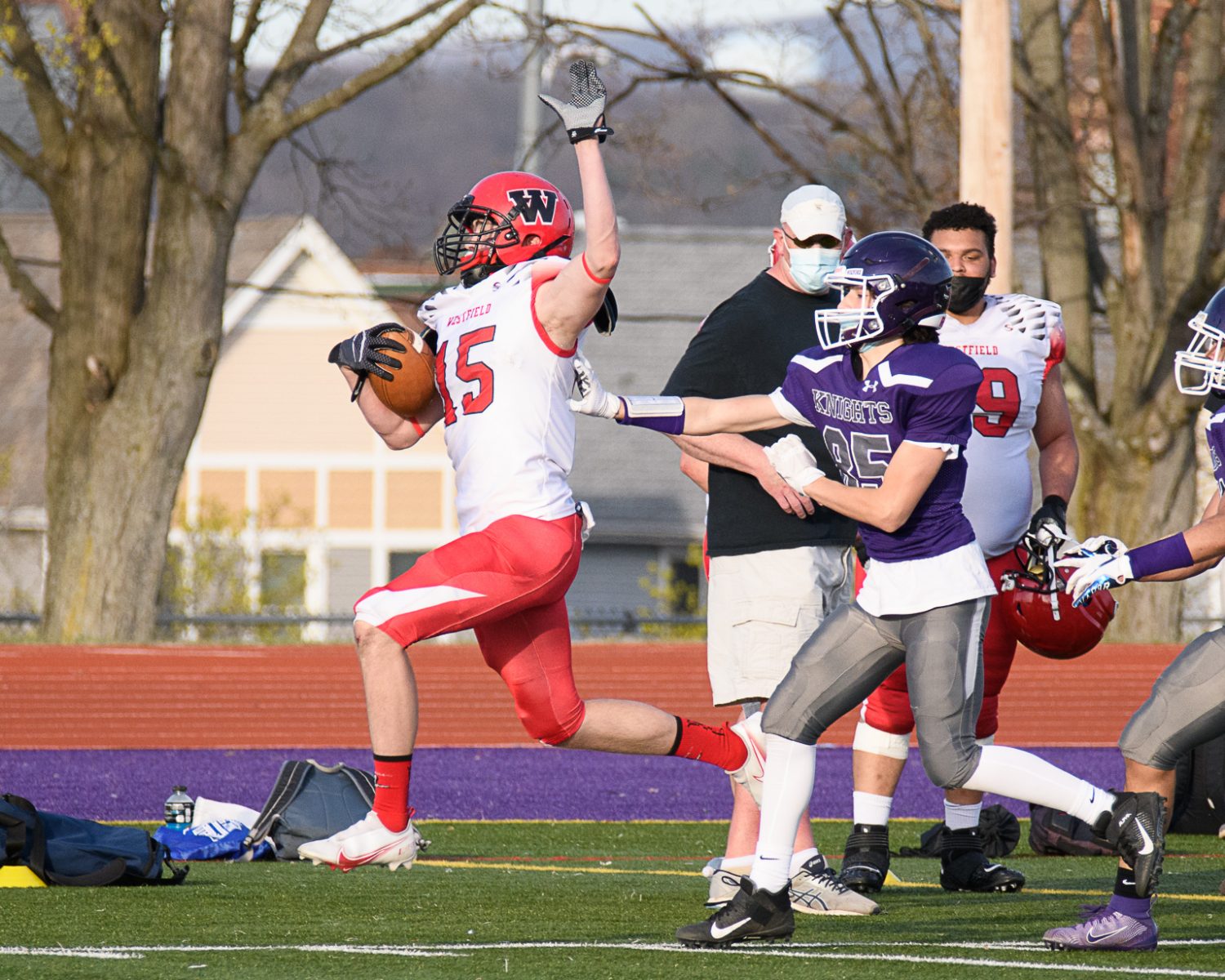 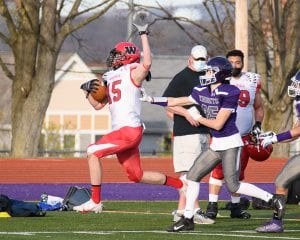 HOLYOKE – If the latest high school football game is a blur for the Westfield Bombers, it is likely because they are still seeing images of Holyoke senior running back William Dumoulin and Co. blazing a trail up and down the field all the way to the end zone.
Dumoulin rushed for 197 yards and two touchdowns on 19 carries and sophomore back Dylan Lubold ripped off a 77-yard TD run as the Holyoke Purple Knights turned back the Westfield Bombers 26-7 Friday night at Roberts Field in Holyoke.
Westfield’s defense was up to the task early, forcing an interception on the game’s first drive – – senior defensive back Joseph Delgado plucked the ball out of the air on 3rd down deep in Bombers territory – – and stopping Holyoke (2-1) near midfield, forcing a punt a short time later.
Westfield’s offense sputtered in the first half, meanwhile, Holyoke continued to establish the run. The Purple Knights put together a long, time-consuming drive that ate up more than five minutes and 72 yards, and culminated with a 3-yard Dumoulin touchdown run with 7:22 remaining in the second quarter. A two-point pass made it 8-0.
Westfield (1-2) battled back. The Bombers moved the ball 71 yards in six plays to begin the second half. They pulled within two points when junior running back Ryan Cimini plunged into the end zone from one yard out. The extra point made it 8-7.
Junior quarterback Matt Adamites completed two key passes on the drive, connecting with senior wide receiver William Brewster on a nice 22-yard play out along the sideline and hooking up with junior wideout Andrew Scott for a 28 yard completion just inches in front of the goal line’s right front pylon.
Holyoke countered with another long scoring drive. Junior quarterback Quinn Cauley began the possession with a 42-yard pass to junior wide receiver Jael Cabrera and ended it with a one-yard TD run to make it 14-7 with 5:19 left in the third quarter.
On the ensuing drive, Westfield reeled off 10 plays, moving the ball all the way to the Holyoke 26-yard line before turning the ball over on downs.
Holyoke handed the ball off to Dumoulin on the next play. Dumoulin broke through the line of scrimmage, turned on the jets, and raced up the right sideline 74 yards for a TD.
Westfield put together another nice long drive – – this time with backup sophomore quarterback Caden Matuszczak at the helm – – but stalled out at the Holyoke 10.
Two plays later, Lubold scampered 77 yards for a touchdown to cap off the Purple Knights’ evening.
Westfield returns to action Fri., April 16 when it will host Agawam at Bullens Field at 6 p.m.