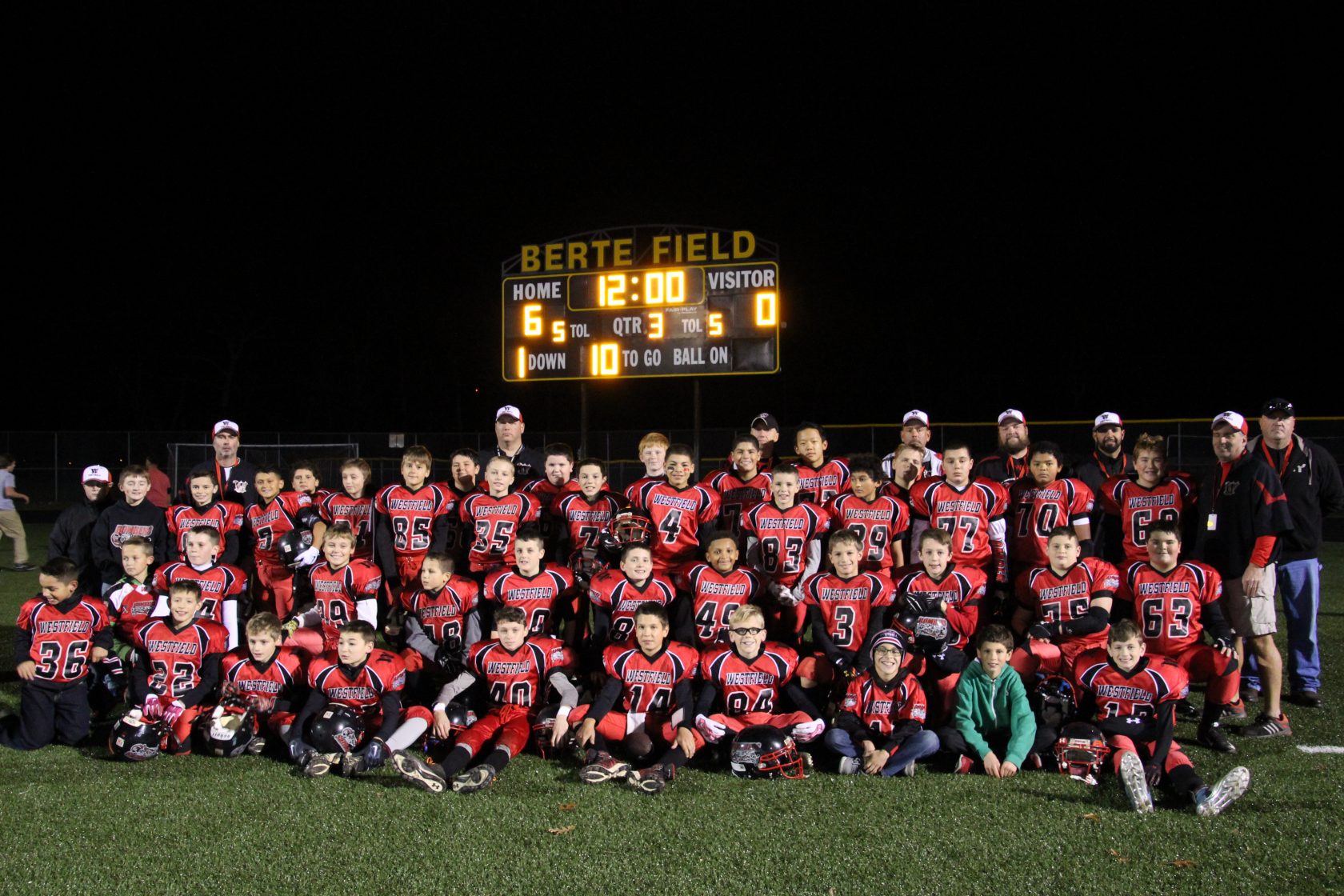 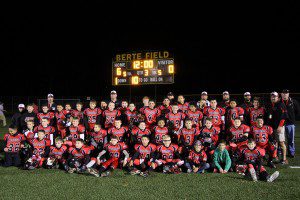 The Westfield Junior Bombers Youth Football League squad kicks off against SYF in the SAFL Super Bowl Saturday at East Longmeadow High School at 1:15 p.m. See how this squad advanced to the “Big Game.”

WESTFIELD – Last Saturday Night, the Junior Bombers faced off against South Hadley. It was a hard-fought battle out of the gate with running backs Rodriguez, Leclair, Avalle, Scott and Ryan Cimini. They battled up and down the field in the first half being led by Schabowski and the line of Daly, Bates, Ochoa, Lamountain, Carrey, and Gardner on offense.
Avalle took a handoff and charged up field to set up a first and goal for Westfield at the end of the 1st quarter. Schabowski took to the air early in the second quarter and connected with Matt Collins to put the first six on the board for Westfield. Defense was a game of its own with four sacks combined by Bates, Ochoa, and Ward. Defensive back contained the South Hadley offense to minimal yardage with great coverage from Scott, Cimini, Rodriguez, Avalle, Sturmer, Schabowski, Adamites, Mike and Matt Collins.
The Westfield defense caused multiple fumble and disrupted several pass attempts by South Hadley throughout the first half, stopping them from putting points on the board.
The second half was led off from Westfield’s kicker Dixon who booted the ball to the 30 yard line, and was almost recovered by Scott.
While Westfield marched down the field, South Hadley could not counter the force generated by the offensive line and the cheering of the 12th man. The drive was finished off with a toss from Avalle to Mike Collins and then passed to Schabowski for a touchdown. The 2-point conversion was followed up by Schabowski returning the favor and passing the ball to Mike Collins to make the score 14-0.
The balance of the game was a battle of defenses with Westfield in the lead. They knew they had to do their job and continue the battle for the team.
In the second half of the game, South Hadley took to the air more frequently which allowed one drive to be stifled by Sturmer with an exceptional knock down pass deep in Westfield territory, followed by an interception by Schabowski.
The last drive of the game ended with a score of 14-12.
South Hadley pulled out all the stops. Only having 30 seconds on the clock and 4th down, they went to the air and it was intercepted by Adamites who returned the catch for 20 plus yards running the game clock out for a Victory.
The Westfield Junior Bombers were named SAFL NFC East Division Champions. – Courtesy of Westfield Youth Football