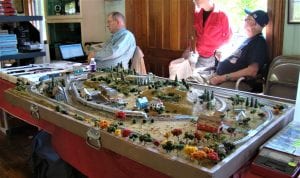 Model train display inside the Chester Railway Station Museum. Chester’s railway station could once again be open if an east-west rail study finds it favorable. (Photo by Amy Porter)

SPRINGFIELD – The natural topography of western Massachusetts, the ownership and use of existing rail tracks, the number of stations served and the possible travel times presented by the routes are among the many factors the East-West Passenger Rail Study Group must consider as the members review what route and approach they should ultimately present to the state.On June 24, MassDOT presented the six possible routes that an east-west commuter rail could take to link Pittsfield to Boston – with stops, depending upon the route in Chester, Blandford  and Palmer – to the study group.Of the six routes presented the study group will narrow them down to three and eventually to one. Once down to three, Project Manager Ethan Brickland of MassDOT explained the group will be “digging more deeply into the operations of the rail.:” Brickland spoke of the existing conditions of the tracks. Fright train giant CSX owns the tracks west of Worcester, which are used by 14 fright trains and one Amtrak train a day. East of Worcester the Commonwealth owns the tracks and  use of 27 MBTA trains daily as well as one Amtrak train.

There are topological restraints, especially in the western part of the state due to mountains, steep grades and just a single track, he added.

Curves in the track due to topology reduce the potential for high speeds, increasing travel times and there are capacity concerns at Boston’s South Station about whether more trains could be accommodated, Brickland said.Brickland said the advantages of establishing passenger rail for the region would include a reduction in traffic on the Massachusetts Turnpike, possible economic development, providing the opportunities for affordable housing for people in the eastern part of the state, and the reduction of greenhouse gases.Drew Galloway, a consultant to the project, then described the six different routes for the group. He cautioned the members the scenarios represented some “rough estimates” and there are no costs established to any of them as yet.Route one would have busses from Pittsfield – connecting Lee and Blandford – to Union Station in Springfield, which would then link to MBTA trains at Worcester’s Union station for Boston destinations. Maximum speed would be 80 m.p.h and the travel time would be more than four hours. There would be some track upgrades.Route two would have passengers board busses in Pittsfield to Springfield and then go straight to Boston. Maximum speed would be 80 m.p.h and the travel time would be less than four hours. There would b additional track upgrades.Route three would include making engineering changes, which would result in higher speeds for Pittsfield to Boston trains. Maximum speed would be 80 m.p.h and the travel time would be just over three hours. Track upgrades and alignment would be included in this scenario. This would also stop at Chester’s railway station.Routes four and five would include a new tracks installed in the existing rail corridor allowing for speeds up to 110 m.p.h. Route four would have a Pittsfield to Boston time of just over three hours. Route five would use the bus from Pittsfield rather than rail connection and would also be about the same time. Route four includes Chester.Route six is the most radical approach by building a new set of tracks dedicated to the service in the I-90 corridor. Speeds on this line could reach 150 m.p.h and cut the travel time down to 2 hour and 40 minutes. Lee and Blandford would be included in this service.State Sen. Eric Lesser has been the leading advocate for studying east-west rail. In a written statement he said,” This is a huge leap in the right direction from where we were two or three years ago, when people were ignoring the possibilities and saying this couldn’t happen. Now we are seeing real options for what East-West Rail would look like, and MassDOT has proven that high-speed rail between Springfield and Boston is possible to achieve. We would still like to see what it would take to get the commute time down even shorter, and we need a study option including a stop in Palmer. Part of the reason for this study has to be about local economies, considering what the impact on economic development would be, and envisioning new commuter patterns instead of assuming that the way we get to work or travel the state now will stay the same for 20, 30, 40 years.”