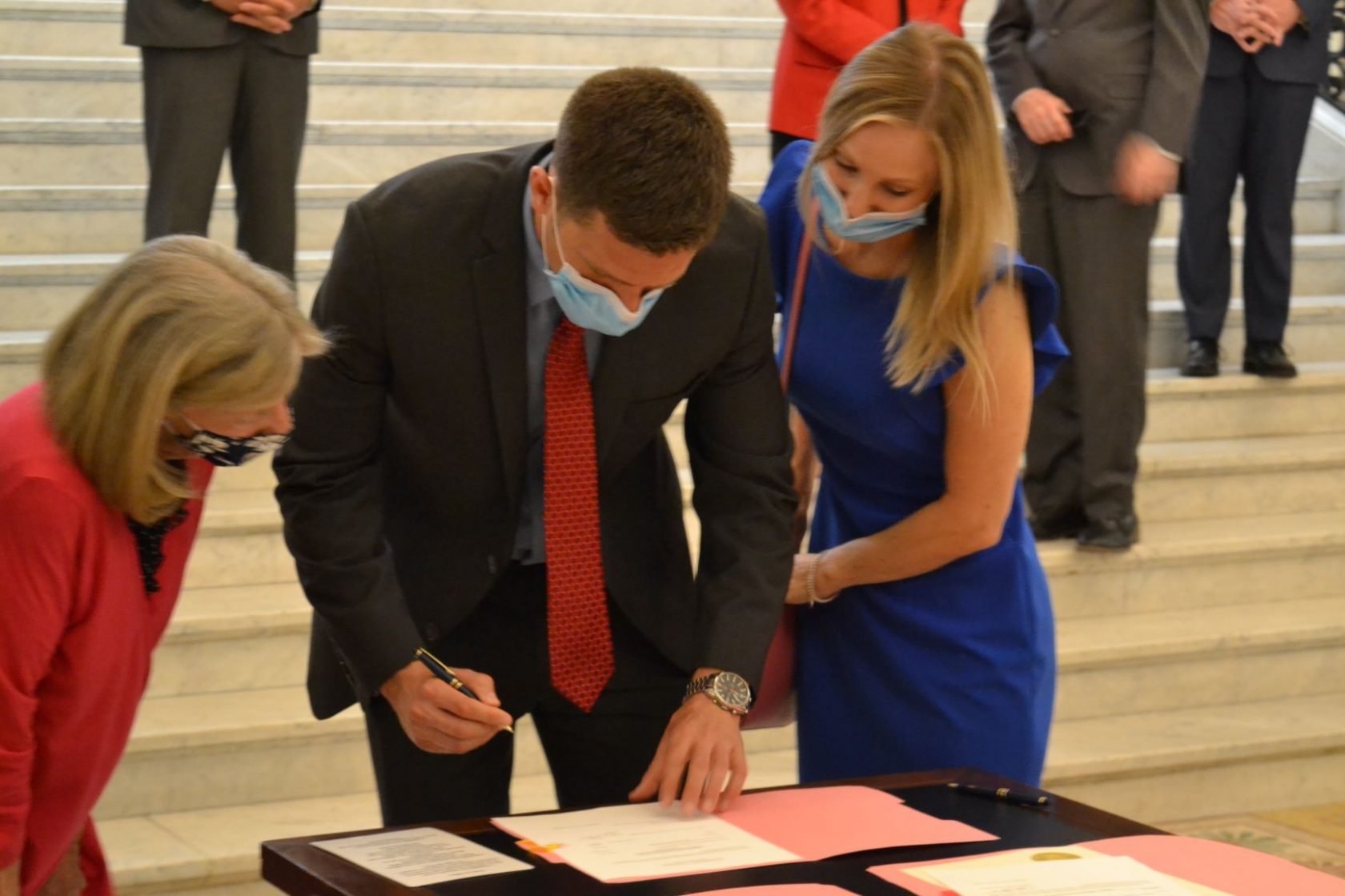 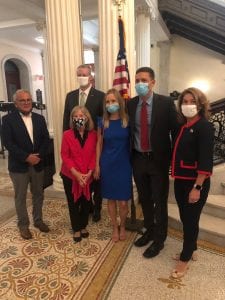 State Sen. John C. Velis is surrounded by his parents Jim and Susan Velis and girlfiend Emily Nicodemi, Gov. Charlie Baker and Lt. Gov. Karyn Polito at the State House May 28 where he took the oath of office. (PHOTO SUBMITTED)

“Just work hard,” she said. “Work hard and, you know, they know what to do. They’ve already been doing it.”

Sens. Susan Moran (D-Falmouth) and John Velis (D-Westfield) were sworn into office Thursday as legislators in both chambers continued to grapple with a respiratory virus that has shut down many facets of life. Moran and Velis last week snatched away two seats previously held by Republicans.

While both senators can celebrate their new positions, they will face re-election in the fall as both arrived on Beacon Hill after special elections. Velis and Moran told the News Service they have already submitted their ballot nomination signatures, which are due by next week, to qualify for the fall elections.

Velis served in the House for nearly six years after winning a special election in 2014. He said Thursday’s ceremony is something he will look back on years down the road.

“I’m going to be able to look at my kids and say, let me tell you about the time I was sworn in as a state senator with a global pandemic,” he said. “I always try to be a glass half full type of guy. So I’m just trying to find the positives in it and nothing changes the fact that I got elected to the state Senate.”

The relatively quick affair drew over 40 people to the State House’s Grand Staircase, the new stage for Gov. Charlie Baker to swear in legislators. The governor officiated Rep. Kate Lipper-Garabedian’s swearing-in ceremony at the staircase in late March, but that event drew even fewer people as COVID-19 cases were still surging. 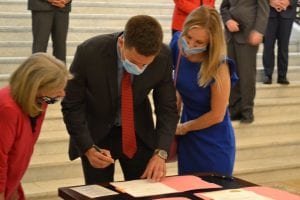 “We could do this through some other means other than trying to be here,” Baker said. “But I think our view was it was important for your families, in particular, and for you … that we swear you in in this building and that we do it despite all the constraints that are associated with that.”

Moran served as a member of the Falmouth Select Board and worked as an attorney before making her way to Beacon Hill. She said she is looking forward to working with her colleagues in the upper chamber and safeguarding constituents’ health and the state’s economy.

“I wanted to surround myself with experts who are already deep into the community, because I’m right away going into budget,” she said of her staff, several having previously worked for Sen. Viriato deMacedo. “I wanted to be sure that we were really heavy on constituent services from day one.”

Moran beat Jay McMahon of Bourne, an attorney and supporter of President Donald Trump, who sought a state Senate seat after losing out to Maura Healey in 2018 for attorney general. Moran replaces deMacedo, who served in the Senate for nearly five years and previously in the House for 15 years.

Velis, an attorney and veteran, defeated John Cain of Southwick. He replaces Donald Humason who served in the Senate since 2013 and previously in the House for 10 years. 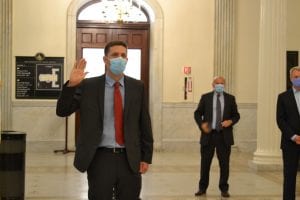 John C. Velis raises his right hand as he is sworn-in May 28 to the Massachusetts Senate. (PHOTO SUBMITTED)

The wins leave Republicans with only four seats in the Senate, further solidifying the super-majority status of Democrats there. In the House, the minority party only holds 31 seats in the 160-seat lower chamber.

And not but 30-minutes after the swearing-in ceremony, both senators made their way to the upper chamber to cast their first votes during a formal session. Senate lawmakers were working on a COVID-19 bill that would overhaul the state’s virus data collection and reporting requirements.