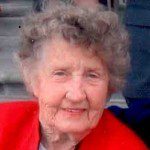 HOLYOKE – Edith M. (Johnson) Erickson, 88, of this city, the beloved wife of the late Herbert J. Erickson, entered the everlasting peace on Friday September 21, 2012, after a long illness. She was born on August 27, 1924 to the late Ivan and Muriel (Robbins) Johnson of Hubbardston, MA.
She was predeceased by her oldest son, Philip J. Erickson. Edith was also predeceased by her only brother, Ivan A. Johnson Jr. and her sisters, Bernice Babineau and Edna Miller. She loved to knit. She would use up yarn, knitting hats and mittens for Brightside. She loved the outdoors where she worked in her many flowerbeds and feeding the birds. She would take walks and ride her bicycle with her grandchildren. The family rented lakefront cottages where she liked to fish. But her favorite thing was to take her johnboat out in the morning and go exploring, sometimes being out for hours. As her children grew up, she took a job as a lunch mother at the former Prospect Hill School in Westfield. She became known as “Granny” to the students. Her husband and she were foster parents to countless children and adopted six. In 1975 they were named foster parents of the year in Massachusetts.
She is survived by her children, Jane Dion and her husband John of Montgomery, MA, Herbert I. Erickson and his wife Eileen of Billerica, MA, Amy Erickson of Holyoke, MA, Dianne Whitlock of Chicopee, MA, Luke Erickson and his wife Sheila of Centreville, VA, David Erickson, Toby Erickson, and Kelly Buckman-Busby. She leaves behind her grandchildren, Briana and her husband Mike, Caitlin, Ben and his wife Rowena, Katrina, Christiana, Larry, Lilia, Jack and Sammy, and her two great grandsons Colin and Rowan. She also leaves her sisters, Jean Murray and her husband Francis, Joan Halfrey, and Ann Leblanc all from Gardner, MA, and many, many nieces and nephews.
Private funeral services will be held Wednesday, 11:00 a.m. at the Cusack Funeral Home, 94 Main Street, Westfield, MA followed by burial in the Pine Hill Cemetery also in Westfield.
Memorial gifts can be made to the Vasculitis Foundation and Brightside for Children and Families.