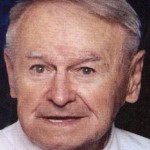 WESTFIELD – Edmund “Geezil” Normantowicz, 90, of Westfield, died Tuesday, July 8, 2014. He was born in Westfield on December 26, 1923 to Anthoni and Camelia (Markowski) Normantowicz. He was educated in the Westfield school system and graduated from Westfield Trade School.
Geezil needed three letters of recommendation to join the Tenth Mountain Division during WW II. His sponsors were Ernest Morrill, Dr. Schoolmaker and Walter Burek. He served in the Ski Troops in Italy in the North Apennines and the Po Valley. He received the Good Conduct Medal, European African and Middle Eastern Campaign Medal with two Bronze Stars, WW II Victory Medal, Marksman Badge and Riffle and Machine Gun Bar. He served under General George Hayes. The Tenth Mountain Division remains as the only military division recruited by a civilian organization, The National Ski Patrol.
Geezil was a tool maker for various machine shops in Westfield. He was a Ward 2 Councilman for two terms. He was a member of American Legion Post 124, the Italian Fraternal Club, Slovaks Citizens Club, the National and the New England Chapter of the Tenth Mountain Division and the International Federation of Mountain Soldiers. Geezil enjoyed mushroom picking, fishing, hunting and trapping. His favorite sport was looking for lost golf balls at the Southwick Country Club and other area golf courses. He leaves his son, Brother Edmund A. Normantowicz M.S. of the La Salette Missionary in Hartford, Ct and a daughter, Melanie A. Rouvellat of Phoenix, AZ. He also leaves his grandchildren, Katie Curley and Jillian Rouvellat; great grandchildren, Mikala and Liam Curley and nephews, Robert and Eugene Orlowiski. Geezil was predeceased by his wife, Elaine I. (Fox) Normantowicz in 2009.
A Liturgy of Christian Burial will be held on Saturday, July 12th at 9:00 a.m. in Holy Trinity Church, 335 Elm Street, Westfield. Burial will be on Wednesday, July 16th at 1:00 p.m. in the Mass Veterans’ Memorial Cemetery in Agawam. Calling hours will be held on Friday from 4:00-7:00 p.m. at the Firtion-Adams Funeral Service, 76 Broad Street, Westfield.
In lieu of flowers, donations may be made to The Missionaries of LaSalette, 85 New Park Ave., Hartford, CT 06106.
www.firtionadams.com