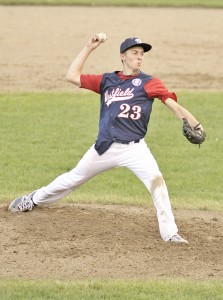 WESTFIELD – It was an odd evening of ball at Bullens Field yesterday, as distant lightning halted play late in the Babe Ruth 15-year-old state tournament matchup between host Westfield and visiting Wachusett.
Once play resumed, Westfield would regain it’s early inning form en route to a 7-2 victory, a win which ensures a date with Worcester’s North Side team Saturday, a squad they’ve already bested 3-0.
“The kids stayed loose during the delay, and that really did it for them,” said Westfield coach Don Murray on how his team managed to keep it’s composure despite the seasonably unfavorable weather conditions.
As had been the case for much of this summer’s baseball action in Westfield, the home team’s pitching was dominant, with starter Brett Turban and reliever Jake Calapietro throwing gas which Wachusett was ill equipped to handle.
“Brett gave us five strong innings, and Calapietro came in and finished it,” said Murray, adding that Calapietro keyed each of the team’s offensive surges. “Jake also got three hits and three RBIs for us and came out of his slump a little bit.”
Other important lineup contributors for Westfield included Liam Whitman, Stephan Kaol, and Nick Clegg, who each notched hits in the scorebook for the boys from Bullens.
Turban stated that the most important factors in his team’s performance was staying warm and loose during the delay.
“We just worked through it. You’ve got to stay warmed up and do the best you can when there is a delay,” he said.
When asked of how the 15-year-olds will fare Saturday in the City of Seven Hills, the Westfield Skipper and his ace are confident and optimistic.
“We feel good. We feel we can go in there and beat them,” said Murray, with Turban echoing his coach’s sentiments.
“We’re going in there with confidence, obviously,” he said. “We’re 2-0 and we’re feeling good.”