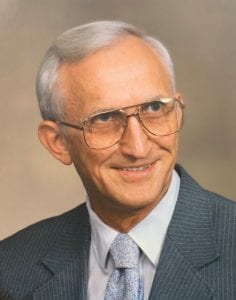 Edward Danek, 86 of Enfield passed away peacefully on September 9, 2019.  Born in Southampton, MA on April 12, 1933, he was the son of the late Peter and Bernice (Guzewicz) Danek.  Ed retired from Western Mass Electric Co. as Meter Department Supervisor in 1991 after 41 years of committed service.  He was a Veteran, having served in the 135th Army regiment during the Korean conflict and was a member of the WMELCO Credit Union Board of Directors for 18 years.
Ed was a man of unsurpassed faith having attended daily Mass nearly every day of his adult life.  He was a founding member of Holy Family Church, now part of St. Jeanne Jugan Parish in Enfield, CT where he worshipped for over 50 years and was ordained as one of the Parish’s first two Eucharistic Ministers and served as a Proclaimer of the Word for many years.  Ed was also active for many years in Legion of Mary, St. Vincent De Paul Society, the Parish Council, worked bingo for over 40 years, and brought communion to the sick.  His service to those in need was both exemplary and inspiring, which led to Ed receiving the Archdiocesan Medal of Appreciation on March 18, 2007 from The Most Reverend Henry Mansell, Archbishop of Hartford.  More importantly, his gift of quietly helping those in need earned him the respect, admiration, and friendship of hundreds.  Thanks to his many caring fiends who responded in-kind during his final months.

Ed is survived by the love of his life and wife of 59 years Laura (Ingemi) Danek; his son Edward, Jr. and his wife Anne of Suffield; and his son John and his wife Noreen of Cromwell.  Ed embraced his role as Grampa to his three grandchildren, Stephanie, Eddie III, and Dave and was a frequent attendee of their activities.  He also leaves his brothers Michael and Peter both of Westfield, MA and nearly 50 nieces and nephews.  He was predeceased by his siblings Ann, Tom, Frances, Tony, and Bernice.
Calling hours will be held on Sunday September 15, 2019 from 4 – 7 p.m. at Leete-Stevens Enfield Chapels, 61 South Road, Enfield.  Family and friends will gather Monday, September 16, 2019 at 9 a.m. at Leete-Stevens Enfield Chapels for a procession to Holy Family Church, 23 Simon Road, Enfield, CT, for a Mass of Christian burial to be celebrated at 10 a.m. Burial will follow at St. Mary’s Cemetery in Westfield, MA, with full military honors.  In lieu of flowers, donations may be made to St. Vincent de Paul Society in care of St. Jeanne Jugan Parish, 23 Simon Rd., Enfield, CT 06082.  To leave condolences online, please visit www.Leetestevens.com.