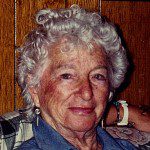 WESTFIELD – Esther Irene (Fletcher) Robbins, 99, a life long resident of Westfield died in the early morning hours on August 7, 2012 at the Governor’s Center after a short illness. She was born, January 9, 1913, the fifth of eight children, to Albert A. and Florence (Brick) Fletcher in Westfield.
Her mother died at the age 40 and her father raised seven children to adulthood on his own. Albert owned and operated Fletcher’s Garage and Taxi Co. and it was continued on by his sons, George and Louis after his death.
Esther graduated from Westfield High School in 1931, the first class to graduate at the Smith Street location. Their class donated the Bronze Tablet to the wall of the entrance of the school. Esther was also a graduate of Henry W. Bishop Memorial School of Nursing, Pittsfield, MA in 1934.
She was extremely proud to have established her status of Registered Nurse and her work at Noble Hospital over a 23 year span. Her time as Head Nurse of the 3rd floor brought her treasured memories of people she worked with and patients she cared for.She was a devoted care giver to all.
She was a life long member of the First Methodist Church, where she and her husband Clark were married on August 7, 1937. She belonged to the Westfield Woman’s Club and the Hill Top group at church. Her life was her work, homes (Jefferson Street and Beveridge Boulevard), family and friends. In retirement Esther and Clark loved to travel and visited Maine, Wyoming, Utah, among many other states. They enjoyed winters in Myrtle Beach, S.C. for 13 years.
She was predeceased by her parents; her husband, F. Clark Robbins who served as Captain of the Westfield Fire Dept.; seven siblings and their spouses, Harold, Albert (Ruth) Fletcher, Ethel (Barry) Halbert, Louisa (Reginald) Woodruff, Mary (Clarence) Hills, Louis (Betty) Fletcher and George (Vivian) Fletcher; an infant niece, Tracey and nephew, Albert E. Fletcher. Esther is survived by her daughter, Leslie (Leonard) Johnson of Wyoming; her son, David C. Robbins (Leslie) of Maine and Florida; five grandchildren, Linda (Shawn) Teubner Brown, Kristen Teubner Barkhurst, David (Stephanie) Teubner, Damon (Amy) Robbins and Jessica (Christopher) Robbins Chavez; ten great-grandchildren and many nieces, nephews and numerous life long friends, neighbors and a special caregiver Dee Musterait
A special thank you to the caring people who lived and worked at the Arbors, the wonderful staff at the Governor’s Center, all in Westfield. Thank you all for the excellent care and friendship you offered Esther and her family to the end of her life.
Cremation has been taken place at her request. A Memorial Service in her honor will be held in September, the date to be announced. Esther will be laid to rest beside her husband Clark, with whom she shared 53 years of marriage.
Memorial contributions may be made to their favorite charities, The Shriners Children’s Hospital or the United Methodist Church, Court Street, Westfield.