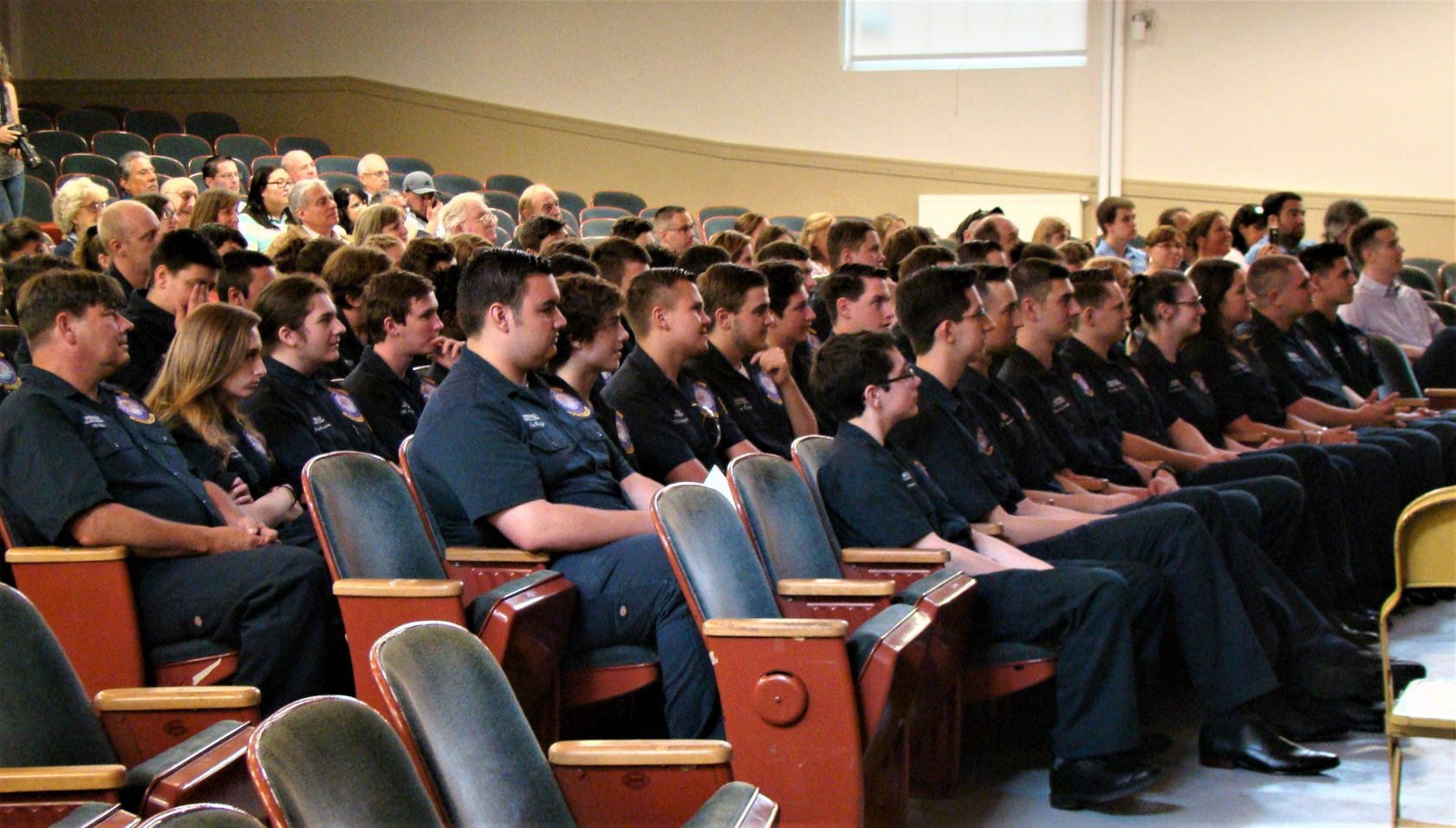 WESTFIELD – The Aviation Maintenance Technology held the “Graduation of the Inaugural Cohort of the Class of 2019” on Thursday morning at 9 a.m. in the Westfield Technical Academy auditorium, prior to Thursday evening’s graduation ceremonies in Westfield Barnes Airport.
WTA Principal Joseph Langone welcomed the class, along with honored guests Mayor Brian P. Sullivan, members of the School Committee and City Council, Superintendent Stefan Czaporowski, Col. Peter T. Green, III Commander of the 104th Air National Guard and representatives from the Federal Aviation Administration, MassDOT Aeronautics Administration, Massachusetts Business Aviation Association and Gulfstream Aerospace.
“You’re a special group. You firsts over the line are what made this program a success,” said Mayor Sullivan during remarks to the graduates.
Czaporowski said in 2013, when he was principal of WTA, he met with Advisory Chair Edward Watson and Student Services Coordinator Robert Ollari about possible new vocational programs to add. Watson started talking about the delay in getting his plane fixed, and the idea was born. “I remember people saying we were crazy, but that didn’t stop us,” Czaporowski said.
Czaporowski said Kenneth Dromgold was recruited as AMT Advisory Board chair in 2014, a position he still holds today. Then they found instructor Galen Wilson. “It is 100% accurate that we couldn’t have done it without you,” he said to Wilson.
Czaporowski said the first grant from Gulfstream Aerospace for $1 million started the program. They have now converted Hangar 2 at Barnes into a working classroom.
He said he will never forget the night that he and Sullivan pushed a donated Piper aircraft through Westfield to the school for the opening ceremonies. “It was one of the most memorable experiences in our lifetime,” he said.
He thanked the School Committee, the 104th ANG, Mayor Sullivan, State Rep. John Velis and Sen. Donald F. Humanson Jr. for their support, among a whole list other supporters.
Czaporowski said he was fortunate enough to be principal for a time of this class of seniors. “I want to thank you for helping us to make the impossible, possible,” he said to the students. 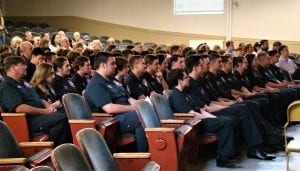 Aviation Maintenance students, with Class of 2019 in front row, attend FAA graduation ceremony. This year, there were 50 students in the program in grades 9-12. (Photo by Amy Porter)

When Langone called AMT Founding Instructor and Department Head Galen Wilson to the podium, all of the students in the AMT program stood in respect in a moving tribute.
Wilson, who retired as chief master sergeant in charge of the 104th Air National Guard aviation maintenance after 30 years with the Air Force, turned to thank Col. Green for coming, saying he truly appreciated the support of the 104th.
Wilson said he had been kept busy during his four years at the school, in part trying to find new ways to inspire the students. “Unknowingly, and simultaneously, my students inspired me,” he said.

He said the students encountered every hardship with dignity, maturity and grace, while undertaking an FAA course he had taken at the college level.
Wilson then introduced each student by name, and spoke about their journeys in the program, their strengths, and their plans for next year. AMT graduating seniors are Devon Dupuis, Jared Fournier, Marc Franceschet, Brandon Laviolette, Vadim Lukin, McKenzie McCann, Keeley Meyer, Nathaniel Spiller, and Edward A. Towers.
“That is my class. The first high school in New England to produce a graduating class from an FAA-certified aviation program in New England,” Wilson said, adding, “Work harder, do the right thing, be committed in your convictions. I will never forget you,”
Following Wilson was Colleen D’Alessandro, acting administrator in the FAA New England Regional Administration. “I know I am inspired. It is truly an honor and a privilege to be here,” D’Alessandro said, and congratulated them for graduating from high school with a diploma and an FAA Aircraft General Course certificate.
D’Alessandro said aviation “is never boring.” She also said they had made a great career decision, because the one billion flying passengers in the United States today wouldn’t get to where they need to go without people like them working in the industry.
D’Alessandro also pointed out the two “young ladies” in the graduating class, Keeley Meyer and McKenzie McCann. “Personally, I’m excited to welcome you to the world of aviation,” D’Alessandro said, adding that she has worked in aviation for 30 years, her whole career.
She said right now the aviation industry is experiencing shortages in mechanics and pilots, and it is now the graduates’ turn to inspire the next generation to get involved.
Thomas Mahoney, engineering director of the MassDOT Aeronautics Administration presented Langone, Wilson and the graduating seniors each a citation from Gov. Charles Baker and Lt. Gov. Karyn Polito, congratulating them on the achievement.
Jennette Pasquarosa of the Mass. Aviation Aeronautics Assoc. awarded each student a $500 certificate for tools from Snap-on, to be matched with a 50% discount from the company, and a gift of tools, valuing $1,200.
Mark Hetherington, Sr., Operations Manager for Gulfstream Aerospace, awarded the students a scholarship to cover the cost of obtaining their FAA Airframe licenses. “Thank you for allowing Gulfstream to be here today. We’re proud to be partners with Westfield Technical Academy since the beginning of the program,” Hetherington said.
Keeley Meyer, WTA’s 2019 Class President, presented an award to Wilson from the graduating class. Meyer thanked him for sharing his knowledge of aviation, and for teaching them to be respectful and courteous young adults.
“That’s a great way to end,” said Langone.