Editor’s Note: Our Faces of Carson feature shares experiences from the perspective of Behavioral Health Network’s caregivers and program directors in helping individuals, families and community.

Ethan is a young man with severe epilepsy. He is fun-loving and bright, but the severity of his condition means that he is unable to participate in many extracurricular activities. His mom had signed him up for summer camp at Kamp for Kids™ before, but always pulled his application before the programs began. The Kamp administration reassured her that it has the supervisory and medical staff necessary to keep her child safe. Ethan’s mom dropped him off in the morning, and he participated actively for about an hour before having a grand mal seizure. 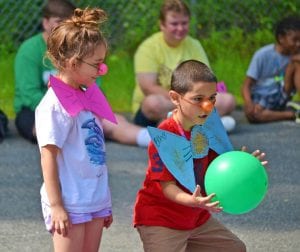 Ethan received care from the nurse according to his seizure plan and was sent to the hospital by ambulance. His mom held him out of Kamp for a day to recover, but he pleaded with her to attend Kamp, saying it was the most fun he’s ever had. She compromised by letting him attend for half days and take frequent breaks to cool down inside. Instead of letting this get him down, Ethan turned these accommodations into benefits. He brought his friends inside with him each day for lunch club and used his indoor time to make art projects for friends and staff. He made the most of his time at Kamp.
Even though his time at Kamp was cut short, Ethan treasured his Kamp experience. His mom thanked the counselors for making Ethan’s summer special, and says that he’s already talking about going to Kamp for Kids™ next year.
Located at Camp Togowauk in Westfield, BHN The Carson Center’s Kamp for Kids™ offers children and young adults – both with and without disabilities – an opportunity to experience growth, inclusion and fun in a summer camp setting. Kamp’s focus is on personal achievement and building friendships, while having fun in a safe, non-competitive environment. Founded over 40 years ago by Judy Hoyt as the first and only camp of its kind in the region, Kamp has served more than 6,000 youth from various backgrounds.