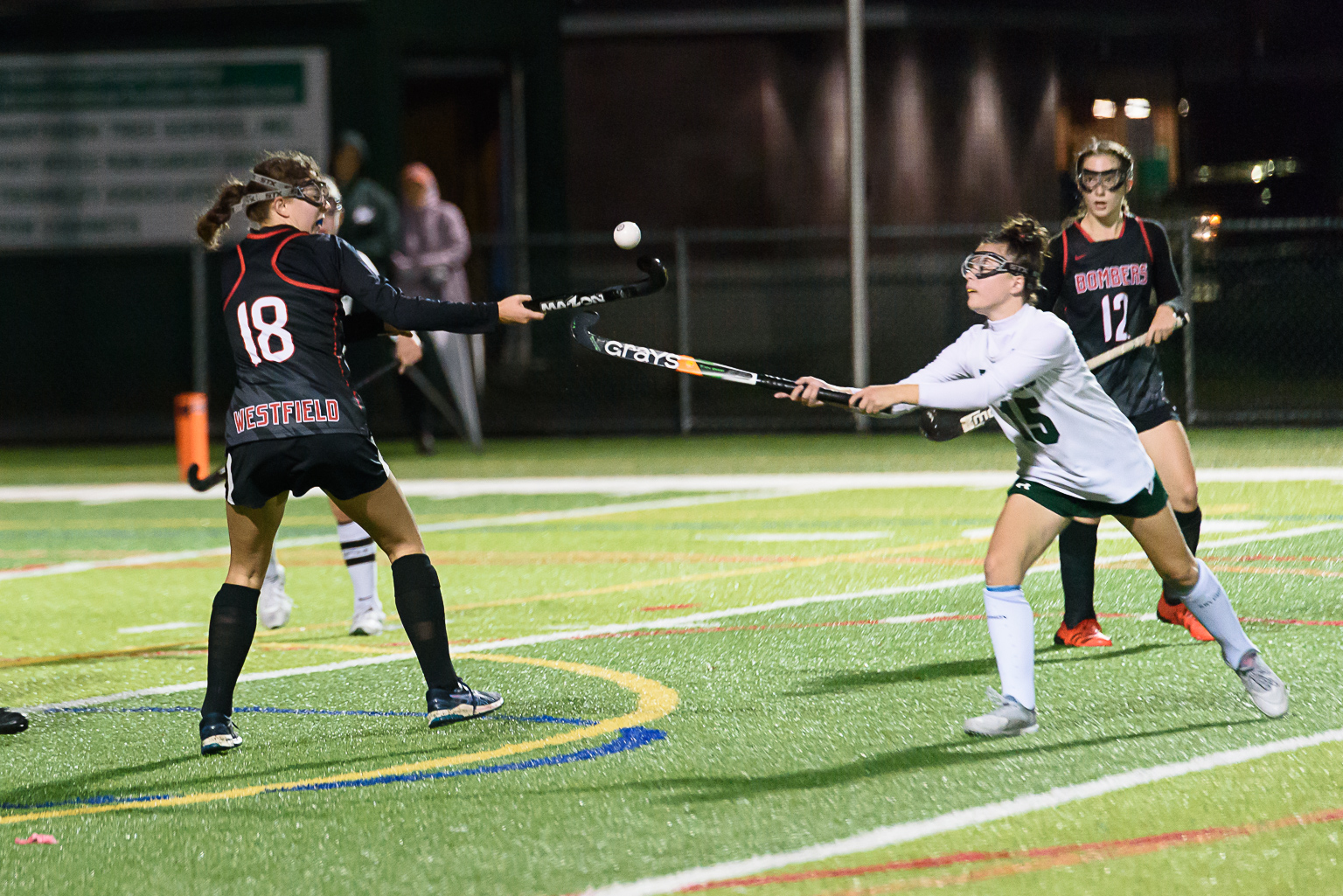 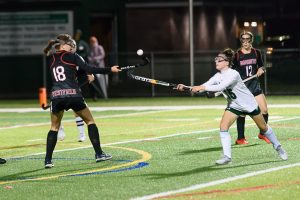 WILBRAHAM – Mother Nature was not the only thing to rain on the Westfield High School field hockey team’s parade.
No. 2 Minnechaug Regional stormed back from a 1-0 deficit, rallying for two goals in the fourth quarter of a Pioneer Valley Interscholastic Athletic Conference Class A field hockey semifinal to slip past Westfield 2-1 in a wind-blown rain Tuesday night on the Falcons’ home turf.
Kendall Gates scored the game-winning goal with 4:14 remaining in regulation, sweeping in to finish off a quick-moving ball that froze the defense and stunned the entire Westfield team.
“That was a heartbreaker,” Westfield field hockey coach Courtney Albee said, “but I thought we were the underdogs coming into this game. I don’t feel like Minnechaug expected what they saw from us. We fought really, really hard. It was a great attempt. I am so proud of (our) effort.”
A scrappy Westfield team came out fighting for every loose ball, even scraping together the game’s first lead. With just under two minutes left in the first quarter, Claire Griffith pushed a pass deep into the circle that kicked up into the air. Meghan Bowen batted it past the goalie into the net for a 1-0 advantage.
It was Westfield’s first score against Minnechaug in more than five years.
Westfield dominated the pace of play for the first quarter but Minnechaug gained some momentum late in the second quarter and carried it over into the second half.
Minnechaug drew four penalty corners in the third quarter and two more in the fourth quarter, the second of which resulted in a game-tying goal when Maeve McConnell scooped up a pass in traffic in the circle and found the back of the net with 10:21 left in the game.
“Our defense kept stepping up to the ball,” coach Albee said. “They were doing a good job keeping their sticks down. They were doing a great job communicating to one another, telling each other where Minnechaug was in the circle so that everyone was marked. Some times we can’t save every ball.”
Six minutes, seven seconds later, Gates shut the door on Westfield’s quest for a championship appearance with the final goal.
“Everyone was playing different positions but everyone stepped up and played their hearts out,” said coach Albee, whose team was missing two starters out due to illness. “Our league is not as competitive as Minnechaug’s league so I felt like this was a very competitive game and a little bit of a stronger field. I hope that (the state tournament seeding committee) takes that how good we are even though we are in a lower league and (realize) that we can stay up with these higher level teams.”

BOYS SOCCER
Tigers team up to stay unbeaten
Westfield Technical Academy 10, Duggan Academy 1
Westfield Tech junior David Bulatov broke the single-season scoring record with two goals and Adam Strycharz tied the school record for most goals in a big team win for the Tigers (14-0-3), who were left out of the sectional tournament field despite a undefeated regular season.
“Although we are not in the Western Mass tournament, today’s game was meaningful to us,” Westfield Tech boys soccer head coach Kyle Dulude said. “We will keep focusing on the positivity and sportsmanship.”