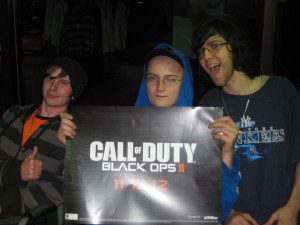 Tyler Simensen, Tim Woelper, and R.J. Crockwell, of Westfield, show their excitement as they await the midnight release of Call of Duty: Black Ops II at the Westfield GameStop store yesterday. (Photo by Dennis Tremblay)

By Dennis Tremblay
Contributing writer
WESTFIELD – Nearly 200 fans of the video gaming world’s most popular franchise, Call of Duty, gathered yesterday at GameStop in Westfield for the midnight release of Call of Duty: Black Ops II. The game is expected to be the biggest video game release of the year, beating out other titles like Halo 4, and Assassin’s Creed III.
With over 1,500 copies of Black Ops already pre ordered in her store, Carrie Danforth, store manager of GameStop, described the game as simply “awesome.” Danforth said she is excited about playing the game in campaign or story mode.
Other gamers disagreed. For them, Black Ops II is all about multiplayer experience, with a brand new cache of weapons and vehicles including the four-rotor “quadcopter.”  Even still, other players are thrilled about the new maps of zombie play that have been hugely popular since being introduced in 2008 with Call of Duty: World at War.
With expectations high, Austin King and Steven Ala of Westfield, were the first fans in line, arriving at 9 a.m. Sunday morning – 36 hours ahead of the release. While waiting, die-hard fans were listening to a DJ, eating Little Caesar pizza or playing on arcade-style consoles. Others proved their fandom by getting buzz cuts in exchange for free “C.O.D” swag offered as a reward by GameStop.
Westfield resident Tim Woelper, who has been a fan of the game since Call of Duty: World at War was released for his XBox, was sporting a buzz cut last night. Some fans were playing video games in the parking lot, using rigged wide screen TVs on the backs of their trucks, and sitting in lawn chairs. However, Mother Nature cried “Game Over” in the form of some light rain and forced the gamers to stop their tailgating game play.
Nick Reed of Westfield said Black Ops II “will be a monumental” change from previous versions of the Call of Duty with a different team of designers and different programming code.
Danforth predicts that Call of Duty: Black Ops II will be the hottest item for this holiday season. Record sales will cement the Call of Duty franchise as one of the most popular and critically acclaimed series in video game history.