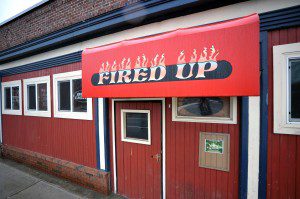 The License Commission voted to again continue an information hearing of an incident which occurred on the sidewalk in front of the Fired Up bar on Elm Street. (Photo by chief photographer Frederick Gore)

WESTFIELD – The License Commission voted to again continue an information hearing of an incident which occurred on the sidewalk in front of the Fired Up bar on Elm Street because the bar owner failed to appear last night
The information hearing is the first step in determining if there was a violation of the conditions attached to a liquor license.
The commission opened the informational hearing in February by reading police reports detailing the circumstances of an incident in which a female, later determined to be a Fired Up patron, beat a male, who said he had asked her for a cigarette, knocking him to the ground and pummeling him with blows to the head and face until she was pulled away by a police officer.
The female patron was arrested on charges of assault and battery and with being a disorderly person. During the booking process a small plastic bag with a white powder, identified as cocaine, was found in her possession. Possession of a class B narcotic was added to the charges against her.
The hearing was continued to the commission’s March meeting because the bar owner argued at the board’s February session that the police report, read at the January commission meeting, had been modified and asked that the minutes of the January meeting be reviewed.
Commission Chairman John Gaudrault called for a motion to table the matter to allow the staff to review the minutes of the January meeting and determine if there was a discrepancy.
“I want to clarify the record, so I’m asking that we table the discussion until the next meeting to allow time for the secretary to clarify the documents and read the minutes of the last meeting,” Gaudrault said last month. That motion was approved by a 3-0 vote.
The Commission voted last night to summon the bar owner to attend the April meeting.  Failure to appear before the board could result in punitive action against the licensee.