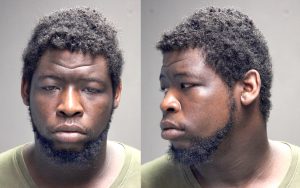 WESTFIELD – Pounds of marijuana, hallucinogenic mushrooms, thousands of dollars, firearms, ammunition and assorted marijuana products were seized Friday when city detectives executed a warrant at a Clark Street address.
Det. Brian Freeman reports in a court document that he was able to secure an ‘anticipatory warrant’ April 9 which was executed that day after officers of the Detective Bureau observed a trigger event, resulting in an arrest and seizure of contraband.
A team of detectives set up surveillance of the target of an ongoing investigation, Shakye Gaskins, 27, and his residence on the second floor of 11    Clark Street.
Officers watched him leave his apartment, apparently to meet a customer who parked nearby. After the apparent customer drove away, Det. Lt. Steve Dickinson coordinated with other officers to stop the man’s pickup truck on Union Street.
Freeman reports that the customer, in a brief interview, told officers that he had just purchased a small amount of marijuana “from a person he knew to be named Shakye and described him as a tall black male.”
Dickinson later explained that the customer’s admission served as the “trigger event” which allowed Freeman, back at Clark Street, to take the next step and execute the warrant at the suspect’s apartment with his part of the team.
Freeman reports the officers approached the suspect’s door where they “announced who we were and why we were there.” When there was no immediate response, the officers opened the unlocked door and entered the apartment where they encountered the suspect and a female resident.
Gaskins was arrested and taken to the police station. A search revealed a wide array of contraband.
Gaskins was arraigned Monday in Westfield District Court before Judge Charles Groce.
There, Assistant District Attorney Andrew D. Ott filed an affidavit supporting a motion for pretrial detention due to dangerousness. He noted that Gaskins had previously been found to be guilty, in Maine, of charges of aggravated assault and domestic violence assault and had been incarcerated. He also listed the contraband found in Gaskins’ apartment.
Ott wrote “A search of the home yielded over 6 pounds of marijuana, THC vape cartridges, pre-rolled marijuana cigars, 156 THC edibles, an AR-15 rifle .556 caliber with no serial number, 2 30 round magazines, 50 rounds of ammo, 169 grams of psilocybin mushrooms, 9mm pistol, 21 rounds of ammunition, (and) over $10,000 in cash.”
Freeman reports that the detectives also found “Approximately 50 empty large plastic bags, many of which would have each contained a pound of marijuana.” and “Three boxes of sandwich bags that appear to be the type of bags that the target uses to package marijuana.” in the apartment.
Gaskins was arraigned on a total of eight charges: distribution of a Class D drug, possession of a Class D drug with intent to distribute, possession of a Class C drug with intent to distribute, possession of a firearm without a Firearms Identification Card, two charges of possession of ammunition without a Firearms Identification Card and two charges of possession of a large capacity firearm.
Groce ordered that he be held without right to bail pending a dangerousness hearing on Thursday.
Ultimately, Gaskins’ case will almost certainly be transferred to Superior Court. Although most of the charges may be heard in District Court, the two large capacity firearms charges (for possession of the semi automatic AR-15 rife and the 30 round magazines) may not be adjudicated there.