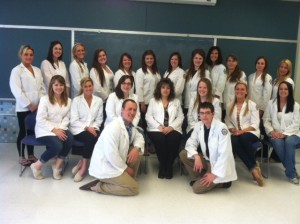 WESTFIELD – Westfield State University will be having its first ever pinning ceremony to commemorate the first class of nursing students to graduate from the university on Wednesday, May 14 in Scanlon Banquet Hall, with a reception at 5:00 p.m. and the ceremony beginning at 6 p.m.
The pinning tradition is a symbolic welcoming of newly graduated nurses into the nursing profession that has been held for centuries. The nursing pin represents where the student graduated from, the history of the nursing program they graduated from, and the successful completion of the student’s nursing degree.
Westfield State nursing students have been asked to choose a person (faculty member, a parent, a friend) who has had a significant impact on the students’ lives and their education to accompany them during the presentation of the pin during the ceremony.
As a part of the ceremony, the students will be lighting individual candles which will be lit from a large Jean Watson Caritas Candle. This candle, named after a famous nursing theorist, represents the extension of light of nursing around the world. Once the candles are lit, the graduates honor Florence Nightingale, founder of modern nursing, and vow to carry her ideals as they move forward in their careers by reciting the International Council of Nurses’ Pledge.
The graduates will additionally be given a flower to place in a commemorative vase in memory of a family member, a friend, or former patient that helped inspire them to become a nurse but could not share this day with them. There will also be a ceremonial passing of the Nightingale Lantern from the outgoing nursing club president to the next nursing club president.
The class of 21 nursing majors will be the first class to graduate from Westfield State’s nursing program, which was established in 2010 in response to the increasing need for nurses in the Commonwealth of Massachusetts. Westfield State is one of only two public universities in Western Massachusetts that offer a four-year program in nursing.
“This is an exciting time and a huge milestone for the program to graduate our first cohort,” said Karen Manning, the chair of the Nursing Department at Westfield State. “It has been challenging to start a new nursing academic program, but the department is determined to achieve success and a high level of competency and satisfaction, for students, faculty, and our clinical partners.”
Westfield State’s nursing program is continuing to build its strengths to ensure the department’s future success with opportunities such as a capstone internship during the students’ last semester where they can work one-on-one with a registered nurse in a health care organization, a partnership with Noble Hospital, optional international clinical experience, and a strong focus on community involvement.
To learn more about Westfield State University Nursing program, please visit http://www.westfield.ma.edu/prospective-students/academics/nursing/program-overview/.