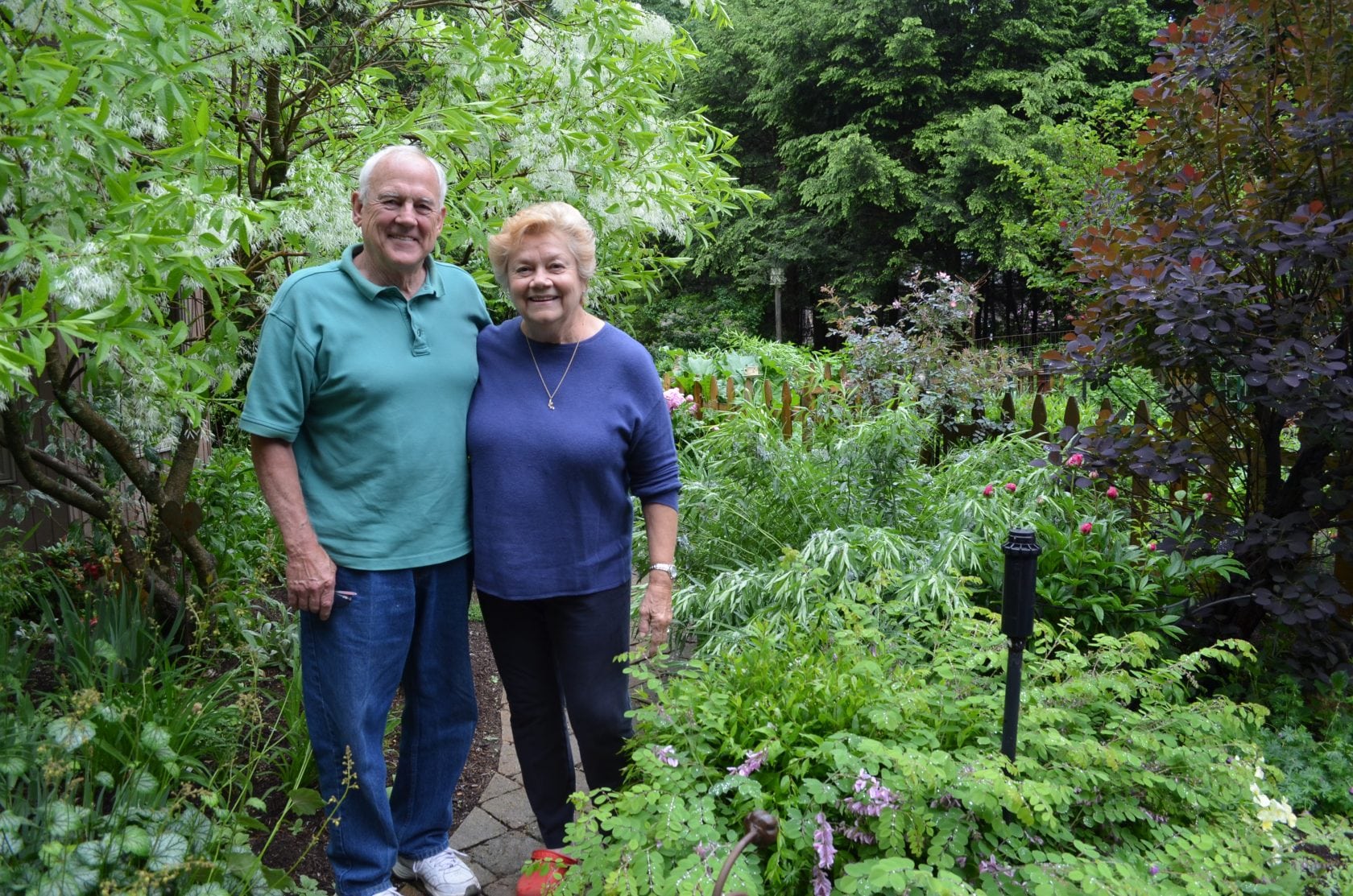 WESTFIELD-A two-acre Southwick garden surrounded by a hemlock and oak forest will be the setting for a garden party to kick off the 20th annual Grandmothers’ Garden benefit weekend later this month.

The garden’s caretakers are Sandy and Robert Watkins of 76 Honey Pot Road and both have been integral members of the Friends of Grandmothers’ Garden for many years. Currently, Robert serves as president of the nonprofit and Sandy has been active with the garden tour fundraiser since its inception. 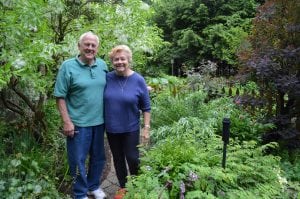 Robert and Sandy Watkins are coordinating logistics for the 20th annual Grandmothers’ Garden Party and Tours. They are seen at the entrance of their two-acre garden.

Grandmothers’ Garden on Smith Avenue officially opened in 1934 and is designed in the colonial revival style. The living memorial to Albert Steiger’s mother, fondly known as Grandmother Steiger, is in a corner of Chauncy Allen Park. The garden is filled with colorful annuals, perennials, fragrant herbs, flowering trees and shrubs and old-fashioned flowers.

Highlights of the garden party include a variety of appetizers catered by Tucker’s of Southwick, including Moroccan Meatballs and Bouchee Pastry Cups filled with carmel onion, goat cheese and roasted tomato. Beverages will include white and red wine, beer, lemonade, iced tea and water.

“The appetizers are fabulous and will be served by the culinary students at Westfield Technical Academy,” said Robert Watkins.

In addition to patrons strolling the paths of the Watkins’ vegetable and flower gardens, a silent auction with a variety of nature-themed gifts will be featured, including a homemade basket weaved around a glass vase, a theorem painting on velvet, floral birdhouses and two bird baths (granite and Goshen stone).

While music of “Soundscapes” will echo throughout the foliage, patrons can also enjoy viewing a carved tree with animal sculptures, a whimsical “folly” made of trees from the forest, and a pond stocked with gold fish.

“The garden party is very informal and we enjoy answering questions that people may have,” said Sandy Watkins.

A “dear friend” of Sandy’s, Cyndy Duade, is also creating 13 floral arrangements that will dot the landscape and the food and auction tables.

In celebration of the benefit’s 20th year, the theme is “Stroll Down Memory Lane,” and the six gardens on tour are considered “Heritage Gardens” because they have been “widely popular” during past years. Owners of the gardens typically offer refreshments including water and a cookie treat for visitors.

“All of the gardens are amazing because of their distinct design,” said Sandy Watkins.

“Each garden’s uniqueness stems from the life and spirit of each gardener,” he said. “For persons who have seen the gardens in the past, this is their chance to see how the garden has changed and matured.”

The location of each of the gardens on tour is kept secret so that when participants arrive at Grandmothers’ Garden on June 23 or 24 to pick up their tickets, they receive a colorful booklet with details and directions. The booklet must be brought to each garden so it can be stamped before entering the site. The booklet can be used for both days touring the Heritage Gardens.

“Some people enjoy going back a second day for ideas,” said Sandy Watkins.

Garden tour patrons are also encouraged to walk the garden paths at Grandmothers’ Garden before embarking on their day of adventure.

Tickets are $50 for the garden party or $65 for the garden party and garden tour. For persons only wishing to participate in the garden tour, the cost is $15 for advance tickets until June 16 or $20 on the day of the tour at Grandmothers’ Garden. Tickets will also be on sale at the upcoming Westfield Farmers’ Markets on Thursdays on the grounds of the Episcopal Church of the Atonement.

“Since we are all volunteers, all proceeds raised from this major fundraiser benefit the preservation, maintenance and continued improvements of the historic Grandmothers’ Garden,” said Robert Watkins, noting it takes at least 10 committee members each year to prepare for these tours.