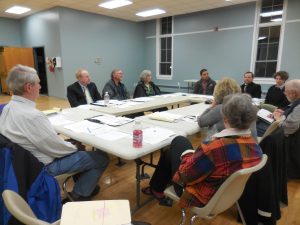 The Hilltown Collaborative met on Thursday to continue plans for economic development and shared services for the six hilltowns in the Community Compact initiative. (Photo by Amy Porter)

HUNTINGTON – The Community Compact signed last year by the six Gateway hilltowns of Chester, Middlefield, Huntington, Blandford, Russell and Montgomery has produced a lot of forward momentum. The Hilltown Collaborative, the group formed to work on the compact’s goals of economic growth and shared services met on Thursday in Stanton Hall to work on specifics of several different projects.
Included will be an economic development coordinator with an office in Chester, the lead town for a $100,000 grant that has already been received. Also completed is a review of financial management services in the towns, done by the state Division of Local Services (DLS), a division of the Department of Revenue. Next will be a review of Information Technology (IT) functions in all the towns by the Pioneer Valley Planning Commission (PVPC). The last two are to determine potential for shared services and savings between the towns.
Andy Myers from Chester, chair of the Hilltown Collaborative, said the group has now visited with the Select Boards of all of the towns that signed off on the Community Compact’s goals.
Attending the meeting was Michael Knapik, former state senator and state representative, who now serves as director of the Baker-Polito administration’s Western Massachusetts office in Springfield.
“I’m very encouraged by the work you’ve all done. You’re serving as a model and template for what’s going on around the region,” Knapik said.
The meeting began with an overview of the hilltowns’ population trends, operating costs, challenges and opportunities prepared by Zachary Blake of DLS, who was not present.
Myers said the combination of declining and aging populations, declining school enrollment and increasing costs is unsustainable. “We’re in an unsustainable trend right now,” Myers said. ”We’ve got to get creative with our existing capacity and resources.”
Among the plans of the collaborative which have been funded by the Community Compact is a shared economic development coordinator for the six towns. The grant of $100,000 will fund the first 14 months of the position, along with administrative support from PVPC, and the costs associated with setting up an office in Chester.
A general job description was shared at the collaborative meeting, and Myers asked members to review it and suggest changes. Joshua Garcia of the PVPC, who along with Patrick Beaudry will be taking the lead on the project, said he would like to see the towns hire someone by July 1.
“It’s absolutely critical that we get the best person possible. You’d like them to think of serving the region, not a shared economic director serving six towns, said Darlene McVeigh, Huntington’s finance committee chair. She added that they won’t be expecting economic growth in fourteen months, but hope to have a long-term plan moving forward.
Towards that end, Myers said that Elan, the design and planning firm that received a grant last year to do an economic overview of the region, will be holding an open house on April 12 from 4 to 7:30 p.m. to present an economic plan. The plan will be a starting point for the new economic development director.
“Most towns reacted positively to an economic development manager. We’ll have 12 to 14 months to work with that person before making the decision to extend that term,” McVeigh said. 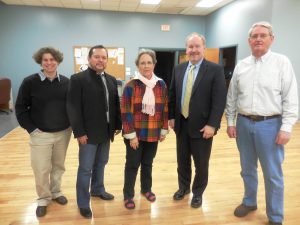 Among those present at the Hilltown Collaborative meeting were Molly Goren-Watts and Jamie Duran of PVPC, Darlene McVeigh, member from Huntington, Michael Knapik, director of the Baker-Polito Administration’s Western Mass office and Andrew Myers, chair. (Photo by Amy Porter)

The Hilltown Collaborative also put in a request for internal IT assistance, which will begin with a feasibility analysis by Jamie Duran and Molly Goren-Watts of the Pioneer Valley Planning Commission, both of whom were at the meeting.
Goren-Watts said she grew up in Vermont, and enjoyed the ride out. “I understand and connect with the challenges the Hilltown Collaborative towns are facing,” she said. Following the review, she said the team will present a range of opportunities and services to the towns.
After a discussion about the status or lack of broadband connectivity in the towns, Knapik said things are changing. “The pace of internet connectivity will be increasing. There will be a lot of progress in the next two or three months,” he said.
Myers said the Commonwealth is looking to help communities with IT efforts. “No question, the idea is to be self-sustainable in the long term,” he said.
“IT supports economic development, which supports growth and the tax base,” McVeigh said.
Derrick Mason of Russell asked whose face would be on that effort. He said there may be resistance from some of the towns asking where the information is going, and if they would lose control.
“You want to make sure that you’re representing the Hilltown Collaborative. This is a grass roots effort to make their lives better down the road,” Myers responded, adding, “We’re on the cusp of what’s happening in our region, and perhaps across the nation. It has to be presented in a positive way.”
Myers said a lot of people have congratulated the group on their progress, but they don’t necessarily think that things will change. “We’re going to have to prove ourselves and be professional,” Myers said.
“The most powerful message is that the six towns asked us to come up here and do this,” said Beaudry of PVPC.
“This is very encouraging from a legislator’s point of view,” added Knapik, who represented four of the towns for twenty years as a state senator. “The legislature is now looking to you in a positive way. I’ve spoken to everyone about this initiative,” he said. Knapik said the initiative goes beyond the six member towns.
“I’m very excited for you guys,” said Joshua Garcia of PVPC.