GRANVILLE – Three members of the Granville Fire Department attended a live demonstration in Springfield that was hosted by Eversource, the energy provider for several communities, including Granville.

The demonstration was based on showing first responders how to handle the different situations when power lines go down in their respective city or town. 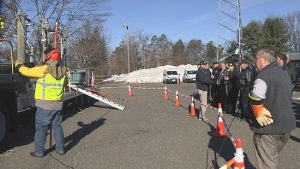 Eversource held a demonstration to first responders in Springfield on Thursday. (Photo from WWLP)

Granville Fire Chief Matt Ripley was one of the three members of the department to attend, and found it to be worthwhile.

“It was beneficial, it opened up support and a line of communication between us and Eversource,” said Ripley.

The demonstration crews used hot dogs to show the effects electricity could have on a human body. With police and fire departments typically arriving to a scene with wires down before the power company can, the crew showed the first responders how to properly handle any of those situations.

Ripley says that Granville is accustomed to incidents with wires being down, therefore the demonstration was a great tool to use moving forward.

“It’s a pretty common call for us,” said Ripley.

Eversource is doing demonstrations like the one they did in Springfield, all across the commonwealth.