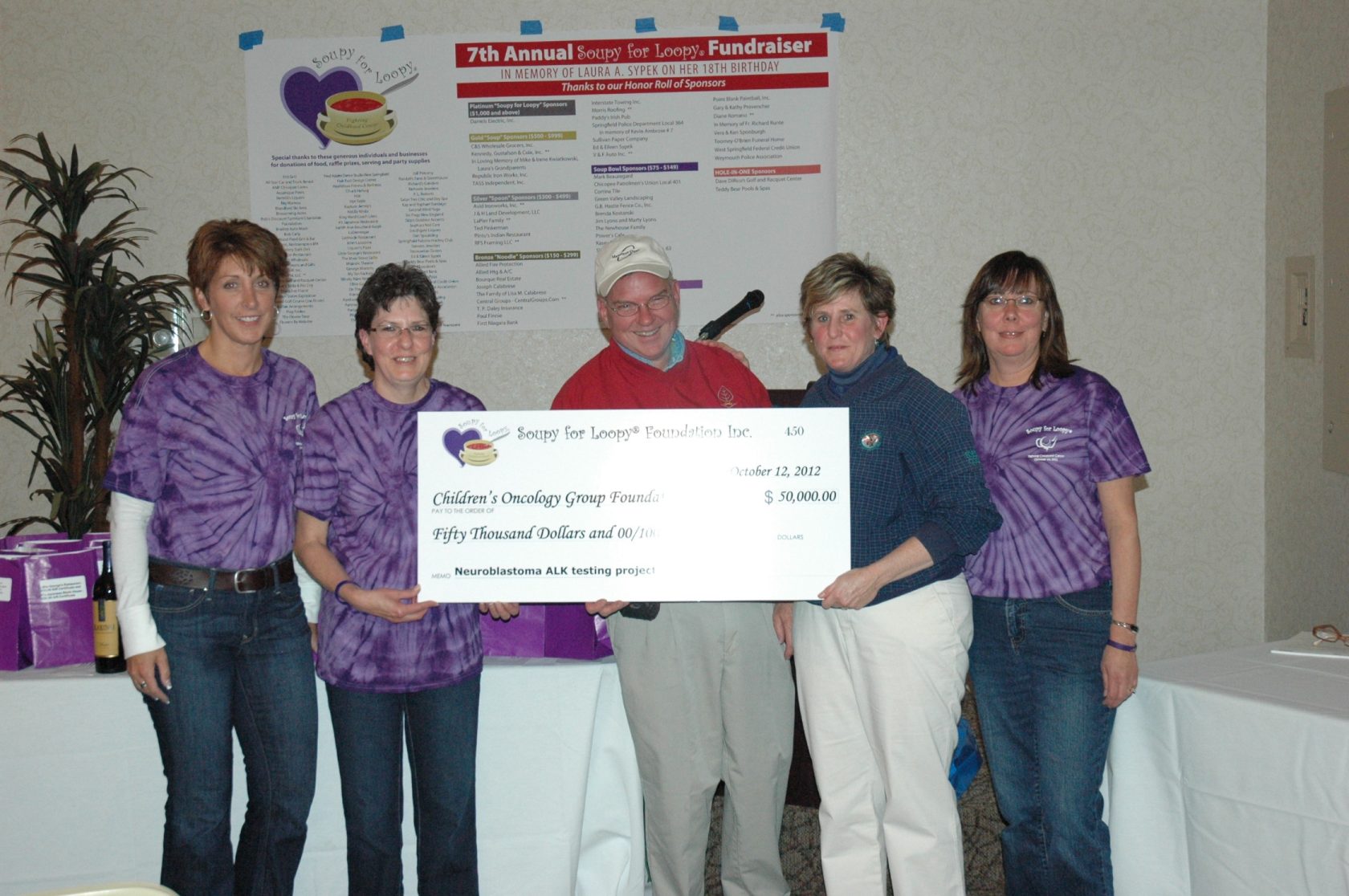 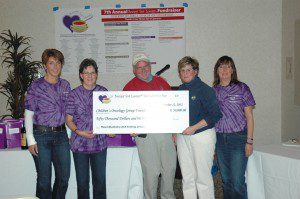 WEST SPRINGFIELD, – The Soupy for Loopy Foundation presented a check for $50,000 to The Children’s Oncology Group Foundation in the presence of nearly 300 guests during their 7th Annual Soupy for Loopy Fundraiser at Tekoa Country Club in Westfield, MA. Dr. Wendy London was present at the event to accept the check and speak about how this grant will be used and the importance of genetic testing that can lead to more effective treatment options for neuroblastoma. Dr. London is Associate Professor of Pediatrics and Director of Biostatistics and Clinical Translational Investigation Program (CTIP) at Children’s Hospital Boston, Dana-Farber Cancer Institute and Harvard Medical School. She is also Lead Statistician on the Neuroblastoma Committee of the national Children’s Oncology Group(COG).
Sandra Kosko, president of Soupy for Loopy Foundation located in West Springfield  said that “the timing for this year’s grant to the Children’s Oncology Group Foundation comes on the heels of the global Advances in Neuroblastoma Research Conference 2012 that was held this past summer in Toronto, Canada. At this conference, hundreds of experts from around the world discussed and presented some very promising strides and initiatives. One of these most promising strides is in the realm of genetic testing of neuroblastoma tumors, specifically, ALK testing.”
According to Dr. Lisa Diller, an internationally recognized leader in childhood cancer, published pediatric oncologist at the Dana-Farber/Childrens Hospital Cancer Center, and Soupy for Loopy Foundation’s Medical Advisor, mutations in a gene called ALK have been identified and described in approximately 10% of neuroblastoma tumors. These findings have been a major breakthrough in understanding the biologic basis of neuroblastoma. Importantly, ALK gene mutations have been described in a subset of a common form of lung cancer and a type of lymphoma, making ALK a very promising target for drug development and for the pharmaceutical industry. Drugs that inhibit the activity of ALK have been developed by drug companies and have demonstrated encouraging results in patients with ALK-mutated lung cancers and lymphomas.
One example of this kind of drug is crizotinib, which was approved by the Food and Drug Administration for treatment of patients with ALK-mutant lung cancers. A trial of crizotinib in pediatric patients has been performed, and the drug has been shown to be well-tolerated, allowing for more extensive study in patients with neuroblastoma.
To facilitate incorporation of targeted inhibitors of ALK kinase into future upfront clinical trials for appropriate patients, testing for ALK mutations in the national setting will be performed in the national Children’s Oncology Group. High quality centralized testing will be done. The development of centralized ALK testing is vital for study of the efficacy of introducing pharmaceutical ALK inhibition (crizotinib) into upfront therapy for patients with high-risk neuroblastoma.
Having the funding to do this laboratory testing on all children’s neuroblastoma tumors (and knowing which children would be good candidates for receiving ALK-targeted therapies) will be a major advance for the field. Funds from Soupy for Loopy Foundation will be used for the actual genetic testing of the tumors – the reagents needed and the costs of shipping and processing. Results will be used to further understand the frequency of mutations, the type of mutations, and the effectiveness of targeting therapies to ALK.