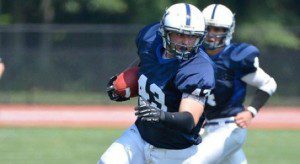 MILTON – Curry College junior Kevin Fruwirth (Agawam, Mass.) connected with classmate Skubie Mageza (Revere, Mass.) on a nine-yard touchdown pass with 51 seconds remaining in regulation, lifting the Colonels to a 34-27 victory over visiting Westfield State in non-divisional New England Football Conference (NEFC) action Saturday afternoon in Milton. Curry notched its first win of the season in improving to 1-2. The Owls saw their record slip to 1-2.
Westfield put the first points on the board midway through the first period after junior Tim Rich (Chelmsford, Mass.) tossed a 35-yard touchdown pass to classmate Jeff Winchell (Scituate, Mass.). Curry responded on the following drive when junior Phil Bigelow (East Orange, N.J.) sprinted 75 yards downfield for a touchdown. After a failed point-after attempt, the Colonels trailed 7-6.
A botched kickoff return by the Owls gave Curry the ball on the Westfield nine-yard line with 5:17 left in the first frame. The Colonels offense took advantage of the field position, scoring on their first play of the drive to take a 13-7 edge. The touchdown came by way of a nine-yard connection between Fruwirth and Bigelow. Curry capped off an eight-play, 82-yard drive as Fruwirth recorded his second passing touchdown of the game with a 12-yard pass to senior Rob Bambini (Westwood, Mass.) with 14:49 left in the first half. The defenses dominated the remainder of the second quarter, sending the Colonels into the break with a 20-7 lead.
Westfield outscored Curry 20-0 in the third quarter. The Owls’ first touchdown came after Rich threw a 15-yard touchdown pass to senior Kevin Parnell (Berlin, Conn.) just 1:36 into the period. A fumble recovery by senior Erik Wellhoff (Natick, Mass.) on the Westfield 45 set up a five-play, 55-yard touchdown drive capped off with a five-yard rush by sophomore Michael Mercadante (Wilbraham, Mass.). The Owls missed the extra point, leaving the game tied at 20-20.
On the ensuing possession, Westfield junior Kevin Duffy (Natick, Mass.) recovered a fumble on the Curry 21. The Owls’ offense capitalized once again with a three-play, 21-yard drive into the end zone. The drive was capped off with another Mercadante push, this time from six yards out.
Early in the fourth, Westfield muffed a punt return that was recovered by Colonels’ junior Rob Deeb (Winthrop, Mass.) at the Owls’ 10-yard line. Curry used two plays to reach the end zone and tie the game at 27-27 with 10:52 remaining in regulation. The scoring play was a six-yard rush by Bigelow to record his third touchdown of the game. After forcing Westfield into a three-and-out on its next possession, the Colonels marched 80 yards downfield on 17 plays, including the game-winning nine yard pass between Fruwirth and Mageza. On the Owls’ next possession, Curry junior Jeff Claffey (Medway, Mass.) intercepted the ball on third down with 16 seconds left in the game to secure the victory.
Curry held significant edges in total offense (451-353), first downs (24-14) and possession time (34:28-25:32).
Fruwirth was 30-for-47 for a game-high 290 yards, three touchdowns and one interception. Bigelow led all rushers with 145 net yards and two touchdowns. He also reeled in six receptions for 31 yards and a touchdown. Rich was 18-for-27 with 257 yards, two touchdowns and one interception.
On defense, Colonels’ senior Jason Genece (Waltham, Mass.) amassed a team-high eight total tackles (6 solo), including one tackle for loss (-1 yard) and a fumble recovery. Freshman Curtis Davila (Yorba Linda, calf) and sophomore Parrish Rogers- Reed (Westfield, Mass.) chipped in with seven total tackles apiece.
Westfield was led by Wellhoff with a game high nine solo tackles. Wellhoff also had four pass break-ups and a fumble recovery. Senior Jeff Smith (Whitman, Mass.) added eight solo tackles.
Curry returns to action next Friday night, hosting M.I.T. at 7:30 p.m. for homecoming weekend, while the Owls travel to Worcester State on Saturday for a 1:30 p.m. contest.