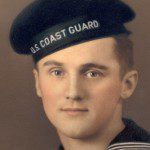 WESTFIELD – Francis Joseph (Frank) Cressotti died on Wednesday, October 3, 2012. Frank was born in Westfield on March 15, 1921, the oldest child of John and Irene (Consolatti) Cressotti.
Frank graduated from Westfield High School in 1940. He worked at Vitrified Wheel until he enlisted in the Coast Guard in 1942. He served in the European-African-Middle Eastern Area from 1942 until 1945. For some of that time, he was on convoy duty in the North Sea. After the war, Frank worked at Stanley Home Products and Saykin Furniture. He was a past treasurer of the Westfield Association of the Blind and a member of the Italian Fraternal Club.
Frank leaves behind his wife of 68 years, Edna M. (Symancyk) Cressotti; two sons, Frank Cressotti and his wife Anne of Southampton, MA, and Karl Cressotti and his wife Mary of Cheshire, CT; and one daughter, Karen Callini and her husband Andrew of Westfield. Frank has 14 grandchildren; Dawn Fitzpatrick and her husband Jim, Jennifer Cressotti (deceased), Deanna Collins and her husband Ted, Kurt Cressotti and his wife Jennifer, Joe Cressotti, Stefan Cressotti and his wife Laura, Anna Cressotti, Anthony Callini and his wife Stephanie, Carla Callini, Nicholas Callini and his wife Kristen, Anya Macmillan and her husband Scott, Karl F. Cressotti and his wife Wendy, Kyra Tafel and her husband Gus and Francis Cressotti. Frank has also been blessed in his lifetime with 16 great-grandchildren. Frank is also survived by his two sisters, Mary Queipo of Westfield and Jennie Hart of Southwick as well as numerous nieces and nephews. He was predeceased by his brother, Constante Cressotti of Westfield.
The funeral for Francis will be held on Sunday, October 7th at 3:00 p.m. from the Firtion-Adams Funeral Service, 76 Broad Street, Westfield. Burial will follow in St. John’s Cemetery in Westfield. Calling hours will be held on Sunday before the service from 12 noon till 3:00 p.m.
In lieu of flowers, donations may be made to the Noble Visiting Nurse and Hospice, 77 Mill Street, Westfield or the Grace Lutheran Church, 1552 Westfield Street, West Springfield, MA 01089.
firtionadams.com