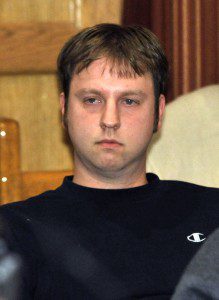 WESTFIELD – Recently, the city’s Law Department issued an opinion that would allow a city man named Brian Winters to become the new Ward 2 city councilor.
But who is Brian Winters?
Winters received one write-in vote for the position of ward two city councilor, according to the city’s law department, which they say makes him the next councilor now that James Brown has resigned.  Brian Winters has indicated that he is willing to serve the remaining time of Brown’s elected term in office.
Some councilors have openly objected to appointing a person who did not run for the seat and who they say got a vote on a whim.
Councilors have also questioned his ability to serve on the council because he is named as a party in the lawsuit against the city regarding the Ashley Street school project.
Last night, the opinion to allow Winters to serve became moot when the Westfield City Council failed to approve his appointment and sent it to the mayor by default. It is now up to Mayor Daniel M. Knapik to fill the ward two seat with the qualified resident of his chosing.
Winters, 28, admitted he lacks experience. In fact, he has no political experience whatsoever. And, he said he was part of a group of neighbors on Ashley and Cross streets suing the city.
“I don’t think it’s a conflict, but I did ask to have my name removed from the lawsuit in case it was found to be a conflict,” said Winters.
A Southwick native, Winters graduated from Southwick Tolland Regional High School in 2003. He spent a year in college, then entered the workforce. He is employed at UTC Aerospace, formerly Hamilton Sunstrand, where he works as a materials processor.
Winters said he was surprised when Brown resigned and he found out he and his wife Erin, who also received one write-in vote, were the next in line for the seat.
“I didn’t believe it would be possible to win that way,” he said.
He and his wife wrote each other in on the 2011 election ballot because they were “not happy with the choices.”
“We weren’t happy with government in general,” he said. “And for our ward, there was only one option.”
Erin Winters declined the position, but Winters said he would like the opportunity to work for the citizens of Westfield in Ward Two.
“I want to put more of a people’s voice in government, not just the voice of someone looking for votes,” said Winters.
There was a third write-in candidate who did not meet the qualifications of the seat.
Winters’ main complaint is that local government is “bonding and bonding and spending and spending and they don’t think it through,” said Winters. “I think we should all step back and evaluate what we’re doing – we should run the government like we run a household.”
Winters moved here in 2007 and lives on Cross Street. He and his wife have a three month old daughter.