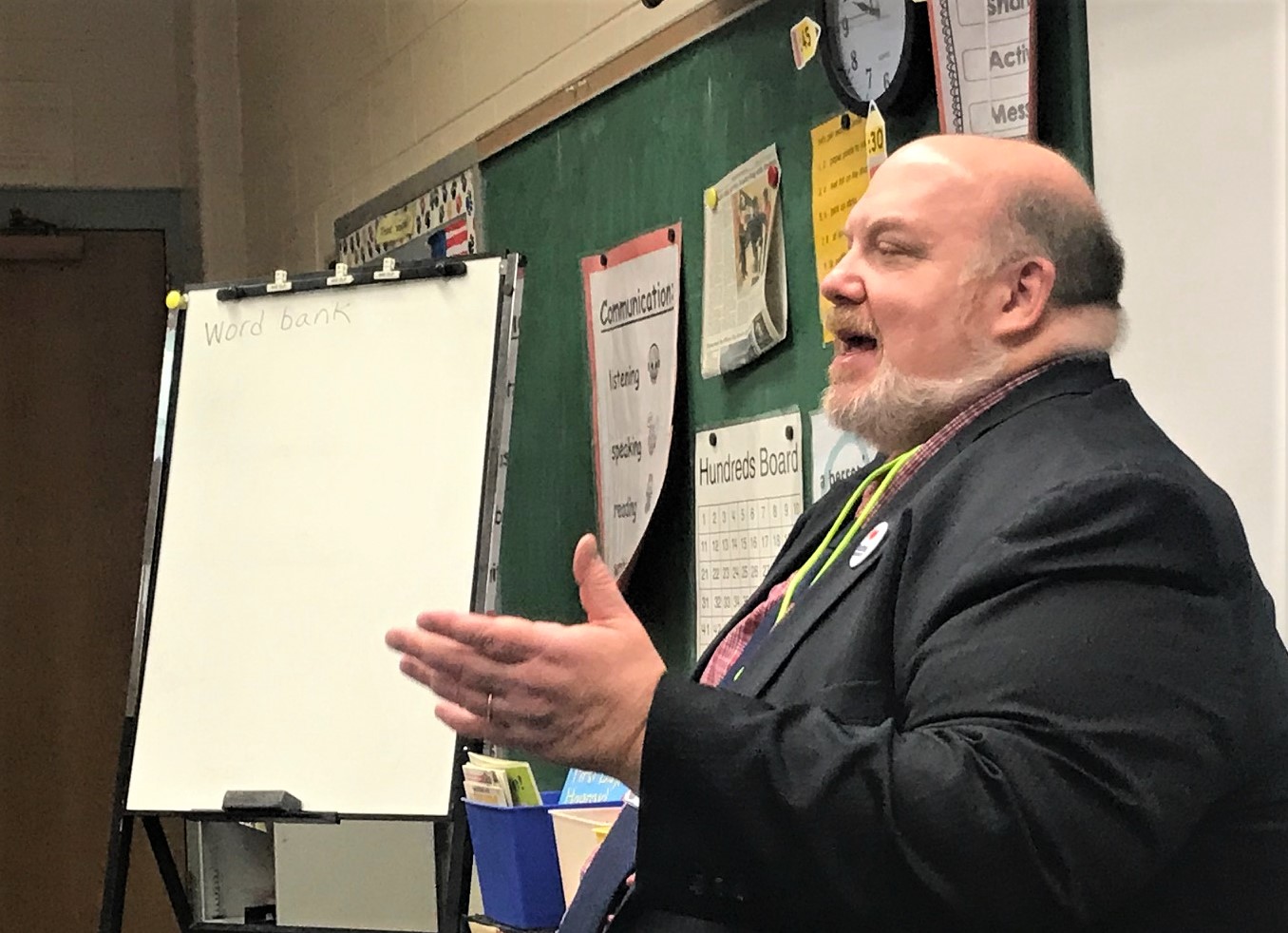 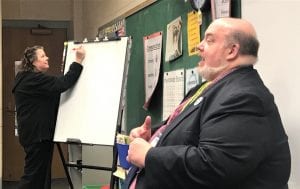 WESTFIELD – State Sen. Donald F. Humason Jr., the city’s mayor-elect, has been fielding questions from journalists across the state recently, but none as interesting as those asked by Paper Mill Elementary School’s second-grade reporters, he said.

Students in Kathleen Knapik’s class interviewed Humason for more than an hour last week as part of the Westfield Education to Business Alliance Adopt-a-Classroom partnership with The Westfield News.

Students have been working with newspaper staff and Knapik on interviewing and note-taking skills. The students conducted research on Humason and created their own questions ahead of the interview. Following the interview, students hosted Westfield News Editor Hope Tremblay for a “professional working lunch” where they ate lunch together and worked on ledes and brainstormed headlines, including the headline for this article.

They asked some hard-hitting questions, including what bills did Humason support that did not become law, as well as some fun questions about Humason’s interests outside of politics.

Humason told the young journalists that he attended Westfield State University – then College – as a Criminal Justice major. 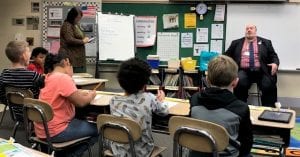 “I never thought I would do this for a living,” he said. “I wanted to be a police officer.”

A chance encounter with law enforcement led him to Westfield District Court where he ended up working as a security officer. This introduced him to the politics behind laws and when former state Rep. Michael R. Knapik asked Humason to join his team of aides, Humason jumped into politics and never looked back.

He told students when Knapik became the senator, Humason ran for, and won, his representative seat. He then won Knapik’s senate seat when he resigned. For nearly two decades Humason has represented residents of western Massachusetts at the State House in Boston, but now he wants to work hard for his fellow Westfield residents as mayor.

Students asked why he ran for mayor.

“I love Westfield,” he said, “I was born at Noble Hospital, I grew up here and I want to help people in Westfield. And, I want to be close to home to be with my wife and son.”

“I don’t know if I have a top goal yet,” he said. “I have a lot of goals. I want to work with the City Council and School Committee and other departments to make sure our budget is in line, and I want to make sure Westfield is a safe community to live in and to drive through.”

After the interview, Humason said he was impressed with the Paper Mill journalists.

“This was great,” he said. “The students were all so engaged. I’ve always found that when talking to kids, they ask better questions than adults – they have no filter and they are honest.”

Below are some of the ledes and headlines created by the second graders following the session with narrative from Knapik:

Yeray asked Humason about his most important law, he responded with several, including the hands-free driving law. Yeray wrote this headline because she felt it was funny and interesting … people would read her article because they don’t know whether he’s not texting anymore or whether he’s not letting other people text anymore, and then they’d learn about his law.

Kamila asked Humason about how he helps people and he gave several examples.  Kamila likes her headline because it uses alliteration – repeated use of the first letter of each word!  Great second grade skill!

Dustin likes this headline because it has two meanings:  Humason played an important role in the renovation and building of the two bridges, and as mayor his goal is to build bridges – relationships – with other city officials and with state officials, etc.

Ben wrote this headline because it explains how Humason wants to help people and serve the community and because “Mayor and care are rhyming words so this is the perfect headline.”  Exact quote from Ben!

Emilee wrote this headline because it represents Humason ‘s motivation for wanting to be mayor, her article will be about the many different reasons he has for wanting to be in government – serving his community, helping people, etc. Emilee has seen his button with the I Love Westfield slogan so she thought people would connect to that.

Senator Don Humason visited Paper Mill School on Wednesday and talked with second graders about everything from his favorite movie “Jaws” to the favorite laws he wrote as a State Senator.

Senator Don Humason is busy making laws, but he enjoys spending his free time with his son Quinn.

Senator Don Humason, mayor-elect of Westfield, doesn’t have one goal for Westfield.  He has a bunch of goals for Westfield.  Senator Humason came to Paper Mill School on Wednesday to talk with Mrs. Knapik’s second grade class about how is preparing to become Mayor in January.

Senator Humason told second graders at Paper Mill School that his favorite movie is “Jaws” and his favorite book is “The Lord of the Rings.”

Senator Humason’s mom and dad helped him get the idea of helping others.  His mom was a nurse and she helped others feel better.  His father was a firefighter and he put out fires.  His mom and dad’s jobs gave him the idea to work in government.

The Westfield News adopted Knapik’s classroom for a year-long project that will culminate in the printing of student articles.