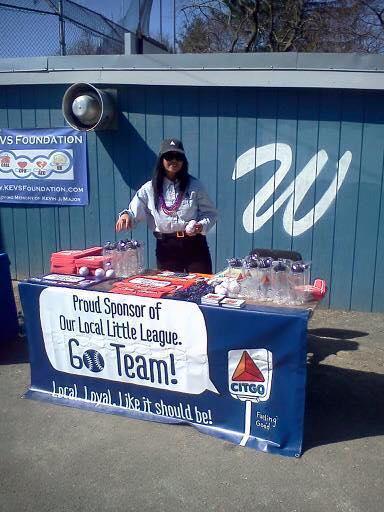 SPRINGFIELD – Westfield residents, business owners, and local officials have shown their support of Babe Ruth and Little League baseball and softball, and American Legion Post 124 baseball leagues in the form of fan attendance, donations, and volunteerism.
But that support is now reaching outward.
People from Southwick, Huntington, and the hill towns are participating on local ball teams more than ever before. And the support is even stretching outward farther into the Pioneer Valley.
Springfield resident Michael Natale has committed to teaching healthy habits, teamwork, and valuable life skills, not only in his city, but in other towns across the northeast, such as Coventry, Conn., New Milford, Conn., Fitchburg, and Westfield through his company, L.E. Belcher.
Throughout the spring and summer months, L.E. Belcher’s sponsorship bought uniforms and equipment for the local little league teams, which are based in the same communities as the four CITGO gasoline stations that L.E. Belcher serves. Natale was present at the teams’ opening day ceremonies in April and July to give away fun and free promotional items. He is also dedicated to charitable causes such as the Muscular Dystrophy Association (MDA) and American Cancer Society.
As a CITGO marketer, Natale works with company leadership to allocate funds for these causes and inspires colleagues to contribute to these various community initiatives. Thus far into 2015, CITGO stations across the country, like those served by L.E. Belcher, have donated nearly $50,000 and hundreds of volunteer hours to community programs, including charitable efforts throughout Massachusetts and Connecticut.