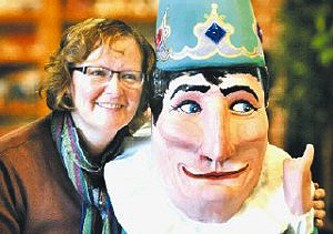 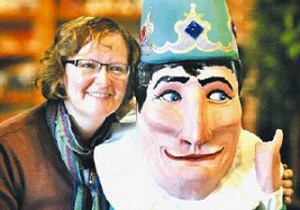 By Joan Geary
Contributing Writer
The Keene Sentinel
Not long ago, Deb Ganley was happily employed as the director of a local private preschool, and loved every minute of it. She might still be there, if not for her shared passion with her young daughter for visiting children’s museums.
Ganley, 55, who had to drive miles on trips to distant museums, began to dream of establishing one in Keene. What started as an impromptu thought quickly grew into the proverbial Siren’s call that just couldn’t be ignored.
And, in no time at all, she resigned from her job to turn her newfound vision into reality.
“I didn’t want to have regrets about not doing something,” she said. “There was always the chance that I would fail. But, at least I would have tried.”
Today she’s founder and executive director of the Cheshire Children’s Museum, which celebrated its grand opening last month at the Colony Mill Marketplace in Keene. The museum — more than two years in the making — provides a variety of hands-on, exploratory, fun-but-educational activities and exhibits for children, from early toddlers to age 10 or so.
Ganley is well-equipped to head the venture. An experienced educator and administrator, she also has an extensive business background and holds an MBA.
Most recently, she spent nearly a decade as director of the Keene Montessori School, a private preschool for children age 18 months to 5 years. But, once committed to founding a local museum, she left that job two years ago, and has never looked back.
“I loved my job, but when I visited museums with my daughter, I always had to travel over an hour away,” she said. “I thought, maybe I could start one. The idea kept coming back. I thought, ‘I’ll regret it if I don’t do this.’ 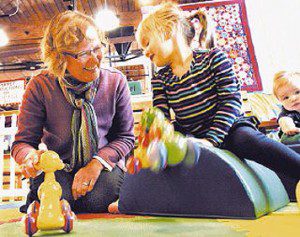 MICHAEL MOORE / Sentinel Staff
Profile—Deb Ganley, founder and director of the Cheshire Children’s Museum at Colony Mill, with Isabella Pare, 2, and her brother Noah, 9 months. The Pare’s were with their mother and are from Rindge.

“I visited museums and did online research. I formed a board of directors, people I knew who had the kind of skills beneficial to a children’s museum,” she said. “Then I left my job. We applied for nonprofit status, and got it through on the first try without any questions.”
For the past two years, Ganley, with the board of directors, has raised funds and community support to launch the museum. They’ve sold food at the Keene Pumpkin Festival, hosted pizza parties at the Colony Mill, and held other events — and rallied a host of area businesses to sponsor museum exhibits.
Astrid Warden of Keene, a Keene Montessori School board member, has known Ganley for nearly a decade, and watched her vision unfold.
“Deb was very torn. She’s very dedicated to the school,” she said. “The museum was a personal dream for her, but also for Keene, too. What’s most amazing about Deb is that she had a dream, but it’s not like she had the resources. She very creatively brought it together in a very grassroots way. She created broad community support. It makes the museum more meaningful.
“It’s incredible what she’s done. It’s a wonderful place,” she said. “She has such an understanding of children. She’s learning as she goes, following what the children want.”
Ganley lives in Keene, but grew up in Westfield, Mass., and has always been interested in working with children. In her teens, she worked as a children’s ski instructor at the now-defunct Mount Tom Ski Area in Holyoke, Mass. But, in college, she took her first business class, got hooked, and graduated in 1979 with a degree in economics.
Two years later, she landed in Keene after accepting a job as an underwriter trainee with NGM Insurance Co. Ironically, Gerald Ganley initially was supposed to interview her for the position, but was called away to another meeting. The pair eventually met and dated for several years. They married in 1986, and now have two children.
Ganley found success with the company, and eventually was named director of underwriting — designing and implementing training programs and educational workshops. Fourteen years later, in 1995, she left to pursue a career in education.
“I left because I wanted to do something different,” she said. “I wanted to teach. I thought that I’d teach at the college level. But I started to think that I wanted to be where I’d make the greatest impact. I chose elementary education.”
After earning a teaching certificate from Keene State College, she taught at Charlestown Middle School for a couple of years, and later in a gifted students program in Walpole.
Along the way, in the mid-’90s, she discovered the Keene Montessori School when she enrolled her son in preschool, and subsequently served on the school’s leadership board. In September 2001, she was offered the position of school director.
“I enjoyed teaching. I liked being director. It combined education and business, and that happens here at the museum, too. I’m very lucky to have the chance to do that here.”
On Aug. 25, the museum opened its doors for the first time to the public. Crowds of visitors came from the Monadnock Region, throughout the state, and elsewhere in New England.
Among the attractions, children investigated interesting places to explore locally — including a market, a radio station and a construction zone with assorted paraphernalia — and throughout the state and world.
Along with that, they played in various child-size forms of transportation, including a real airplane, constructed from a kit, donated by Monadnock Aviation. There’s even a separate, carefully designed playroom for toddlers.
“The grand opening was amazing,” she said. “We’ve had people come every day since. We’re talking to schools about field trips, and working with MoCo (Arts) on a puppet show. We had our first child’s birthday party here last week. We want to expand our community outreach.”
Ganley now spends most of her time on-site. The museum is open every day except Monday from mid-morning to early evening. She’s assisted by a small part-time staff and a few volunteers.
“We’re a place for parents to interact with their children,” she said. “We’re not a drop-off center. There’s no technology here. It’s all low-tech. We give the child the chance to play. While they play, they’re learning. That’s the most fun of all to watch.”
Kristin Targett of Keene has worked with Ganley on the Montessori school’s leadership board and is also a member of the museum’s board of directors.
“Deb’s a wonderful, caring person,” she said. “In the two organizations I’ve known her, she’s a fabulous face for each. She knows everyone who walks in the door and is a warm, welcoming face for each one.
“The idea for the museum just sat with her and sat with her,” she said. “She took it out and said, ‘I really have to do something’ — and here we are.”
Ganley isn’t afraid to stretch her limits. Recently, on a windy day, and with some apprehension, she took her first helicopter ride at the Keene Air and Auto Show. She admits she was shaking at first, but eventually relaxed and enjoyed it. She’s glad, she says, that she ventured beyond her comfort zone.
Most of her free time is centered on family. Every morning, she walks her daughter to school. Lately, they’ve been talking about where to ski this winter, she says.
Besides that, she still spends a lot of time dreaming about the museum.
“My vision is to continue to get families here. To serve the community on several different levels,” she said.
“We want to have events so families have a place to go. Keene is a very friendly community. We just want to add to that.”