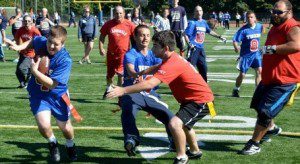 WESTFIELD – The Westfield State University athletics department recently hosted the highly successful Special Olympics flag football tournament for the second consecutive year.
Special Olympic teams from various parts of the state traveled to Westfield State’s Alumni Field to participate in this event. The teams were; the Hampshire Heat Lightning of Chicopee, the ARC of Opportunity North Central Avengers and Cardinals of Fitchburg, the Tigers and Bears of West Springfield, and the Central Massachusetts Shamrocks of Worcester and Rutland.
Approximately 60 Westfield State student-athletes volunteered for the worthwhile cause, 20 of whom are members of the Student-Athlete Advisory Board (SAAB).
Carolyn Connolly, a senior member of the cross country and track teams and the SAAB president, welcomed the Special Olympians and their coaches and fans, and officially opened the games.
SAAB members were also responsible for recruiting varsity team members to volunteer for the event. Additional responsibilities for student-athletes included officiating, scorekeeping and offering general assistance.
Westfield State associate director of athletics Nancy Bals said the event was a winner.
“The event was a huge success, with perfect weather and over 80 Special Olympics athletes participating in the flag football assessment,” said Bals. “The Westfield student-athlete involvement improved tremendously, with twice the amount of volunteers compared to last year. We were able to add in the ambassador piece for each team and some of the Special Olympians really bonded with the ambassadors.”
The event raised awareness of volunteer opportunities, particularly with the Special Olympics. It gave students a chance to give back to their community in a unique way.
John Scully, associate section director of the Special Olympics, said: “The student volunteers were very helpful throughout the event and made the event a great success!”
“Being able to surround myself with the athletes of Westfield State and all the participants of the Special Olympics was an amazing experience,” said Courtney Wood, a junior member of the Westfield State women’s soccer team. “It was exciting and great to watch the participants have the time of their lives while playing flag football against each other. Everyone had a lot of fun and I’m glad I was involved.”
The student-athletes commented on the amazing sportsmanship of the Special Olympians. “They have a great respect of the game and of each other,”, said Brad Norkum, a senior on the Westfield State ice hockey team.
With two consecutive years of successfully run Special Olympic games at Westfield State, it will likely become an annual event that will allow special need athletes to have an afternoon of fun, competitive games, and allow student-athletes to give back to their community.
“On behalf of WSU athletics we were pleased to host the Western Mass. Special Olympics Flag Football Tournament,” said Westfield athletics director Richard Lenfest. “This was a great experience for WSU student-athletes to coordinate and work the tournament. We look forward to working with Western Mass. Special Olympics in the future.”
Victor Silva, student athletic trainer and SAAB member, stated it best: “Honestly, it was a great experience. The kids who participated were great and you could tell they were so happy to play. I would do it again if I had the chance.”